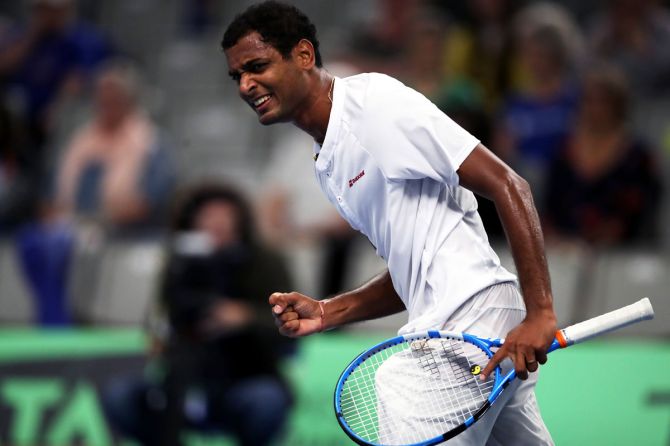 IMAGE: India's Ramkumar Ramanathan stormed into the singles semi-finals of the Eckental Challenger for his best performance of the season. Photograph: Ian MacNicol/Getty Images for LTA

His net game looking much improved, India's Ramkumar Ramanathan stormed into the singles semi-finals of the Eckental Challenger with a ruthless win over fourth seed Evgeny Donskoy, in Eckental, Germany, on Friday.

The 35 points that Ramkumar has assured himself by reaching the last-four will push him back to top 200. He is currently ranked 206.

It is Ramkumar's best performance of the season as reaching the Bangkok Challenger quarter-finals in January was his best result before today's win. He resumed competitive tennis last month after a long coronavirus-forced break.

While his net game fetched him a lot of points, an off-colour Donskoy's unending errors only made it easy for Ramkumar.

It is Ramkumar's first win over Donskoy, ranked 120. The last time they met in 2015 Karshi Challenger, the Indian had lost.

Ramkumar broke Donskoy in the fifth game when his rival netted a return, opening up a mini lead. It became 4-2 in Ramkumar's favour when Donskoy's backhand return crashed on to the net.

A backhand volley winner at 30-all on Donskoy's serve gave Ramkumar  another breakpoint. The Russian only helped the Indian by serving a double fault on the breakpoint.

Ramkumar came out to serve of the set and began with a couple of aces. After losing two points on unforced errors, the Indian closed the set when Donskoy failed to return a serve.

In the second set, Ramkumar broke Donskoy in the third game, wining points by charging the net. He saved a break chance in the next game, which he sealed with consecutive aces for a 3-1 lead.

Donskoy's errors did not stop, helping Ramkumar finish the game in a jiffy. 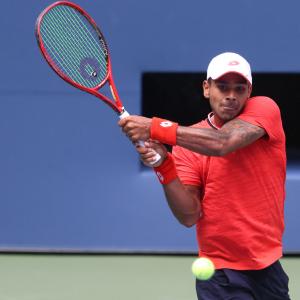