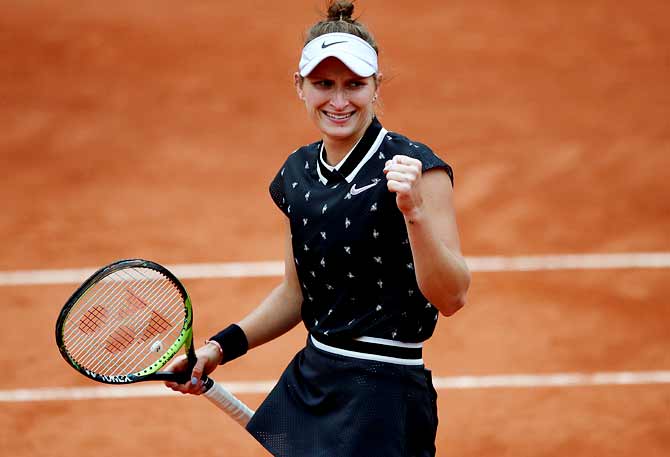 IMAGE: Marketa Vondrousova has won more matches then any other player on the WTA Tour since the Australian Open. Photograph: Benoit Tessier/Reuters

Unseeded Czech Marketa Vondrousova became the first teenager to reach a Grand Slam final for 10 years as she beat Johanna Konta 7-5, 7-6(2) at the French Open on Friday.

The 19-year-old lost the first 10 points of the match on a rainy Court Simonne Mathieu but the left-hander had more guile than her more powerful opponent in testing conditions.

She will take on Australia's Ashleigh Barty in Saturday's final after she prevented an all-teenager final by beating American Amanda Anisimova in three sets.

Vondrousova will hope to go one stage further than Ana Ivanovic in 2007, the last teenager to reach the Roland Garros final, when she lost to Justine Henin.

Konta, bidding to become the first British woman to reach a Grand Slam final since 1977, will be kicking herself after squandering leads in both sets.

The 28-year-old, who had never won a round at Roland Garros before this year, had three set points when she led 5-3 in the opener, but on first lashed an easy volley well over the baseline with the court at her mercy. 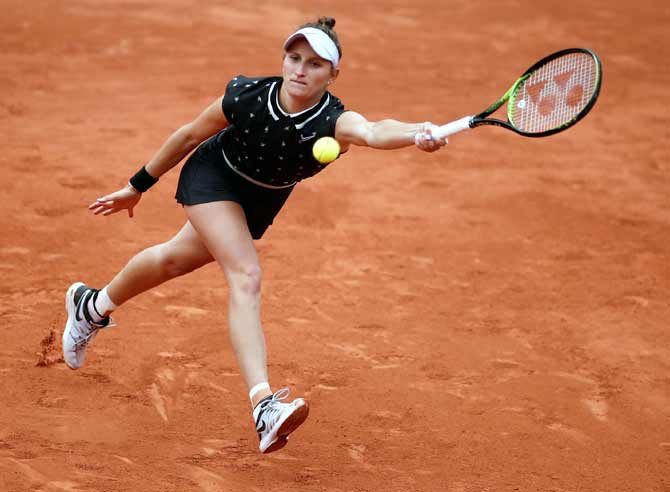 IMAGE: Marketa Vondrousova will aim to become the first Czech to win the French Open since Hana Mandlikova in 1981. Photograph: Benoit Tessier/Reuters

From that point on Vondrousova began to use her splendid array of drop shots, lobs and superb anticipation to take charge, helped by regular errors off the Konta racket.

She broke the Konta serve to level at 5-5 and then held with an exquisite drop shot and lob volley combination.

Vondrousova claimed the first set with a defensive lob that landed plumb on the baseline.

The Czech, whose tattoo says "no rain no flowers" -- an appropriate message considering the conditions and the court's setting, surrounded by greenhouses -- lost focus at the start of the second set as Konta moved 3-1 ahead.

Konta consolidated her lead to 5-3 but again the wheels came off as her game began to disintegrate.

Serving for the set she lost a volleying exchange at 15-30 and then double-faulted at 30-40.

Konta bashed away a forehand winner to take the set into a tiebreak but Vondrousova showed remarkable calm to move 6-2 ahead and then clinch victory with a disguised dropshot.

Vondrousova, who has won more matches then any other player on the WTA Tour since the Australian Open, will become the first Czech to win the French Open since Hana Mandlikova in 1981 if she overcomes fellow Grand Slam final debutant Barty on Saturday.

But the Australian kept her focus to book her place in Saturday's finale. 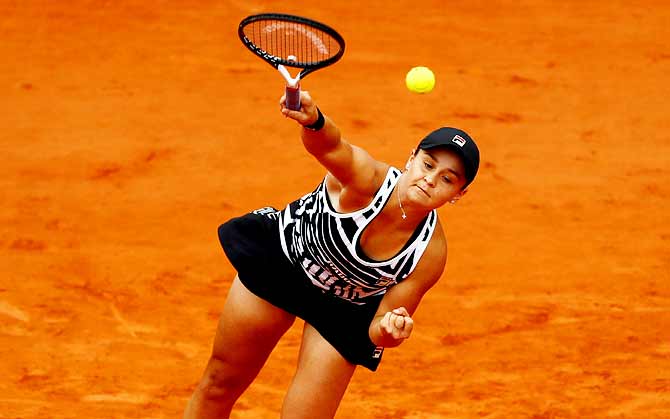 Australian Ashleigh Barty weathered the fierce challenge of Amanda Anisimova to end the 17-year-old's barnstorming run at the French Open and reach the final with a rollercoaster 6-7(4), 6-3, 6-3 victory on Friday.

The eighth-seeded Barty, the first Australian woman to play a final here since Sam Stosur in 2010, will take on Czech teenager Marketa Vondrousova on Saturday.

Anisimova, who had knocked out defending champion Simona Halep in the previous round, rallied from 5-0 down to take the opening set and open a 3-0 lead in the second, only for the momentum to shift again in favour of Barty.

Anisimova, the first player born in the 2000s to reach the last eight or semi-finals at a Grand Slam, put up a great fight to save five match points but Barty sealed the win on her sixth in light drizzle.

"I fought my hardest, it's just incredible," said Barty, who will be looking to become the first Australian woman to hoist the Suzanne Lenglen Cup since Margaret Court in 1973.

"I went away from what was working but I am proud of the way I fought and found a way back into that match. It was cold, windy, very tough for the both of us.

"It's incredible, it's an amazing journey that I've been on. I can't wait to see what happens." 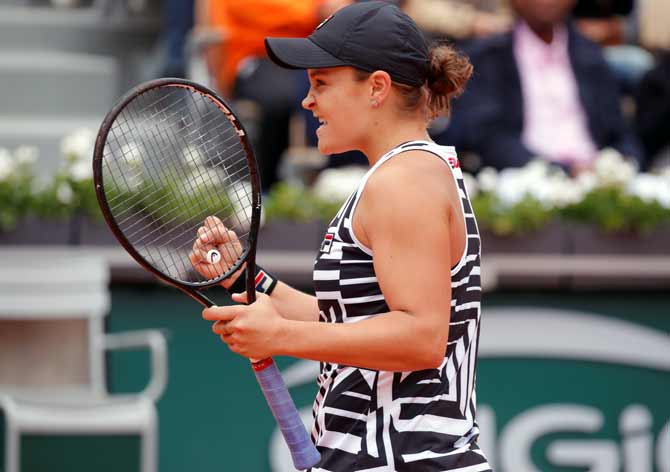 IMAGE: Ashleigh Barty is looking to become the first Australian woman to win the French Open since Margaret Court in 1973. Photograph: Kai Pfaffenbach/Reuters

Barty took full advantage of Anisimova's early jitters on a chilly, windswept Court Suzanne Lenglen, allowing her opponent only one of the first 18 points.

It was a sobering moment for the teenager, who looked nothing like the fearless player who had beaten Halep on Thursday.

But the American sprung into life at 5-0, saving two set points to bag her first game. She went on to steal Barty's serve as her game finally clicked.

Until then, Barty had been unchallenged on a windswept Court Suzanne Lenglen, spraying the court with winners down the line and cunning drop shots.

Having found her range and her speed, Anisimova rallied back and snatched the extra break to serve for the set at 6-5, only for Barty to force a tiebreak when the American buried a backhand into the net.

The tiebreak was also a see-saw contest, Barty moving 4-2 up before Anisimova scored five points in a row to take the set with a forehand winner down the line.

She then raced to a 3-0 lead in the second without conceding a point.

But the momentum shifted, again, with Barty taking six games on the spin to level the tie.

Barty's crafty game prevailed in the decider as she went 5-2 up. Anisimova, who will break into the top 30 when the WTA rankings are released on Monday, piled on some more pressure on Barty as she kept saving the match points. 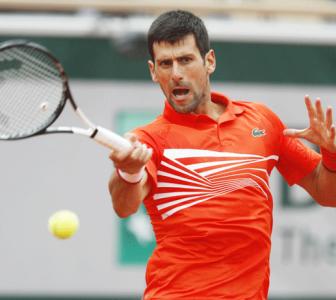 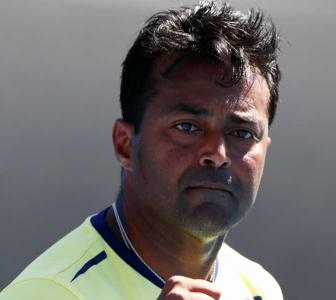 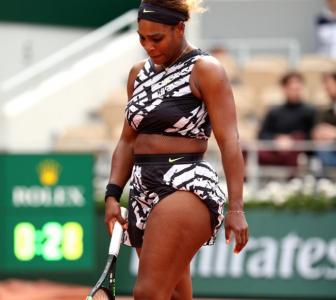 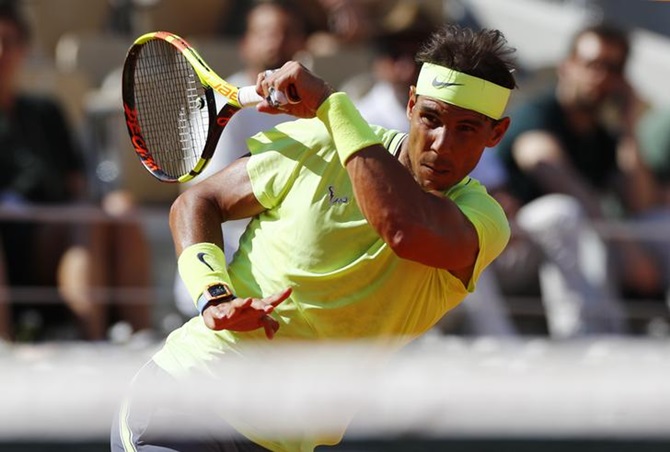 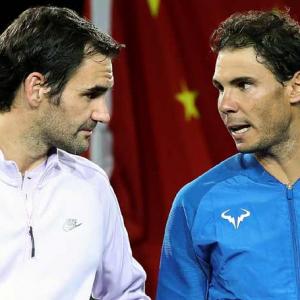