'He will be remembered most for inspiring people around the world to pick up a basketball and compete to the very best of their ability.' 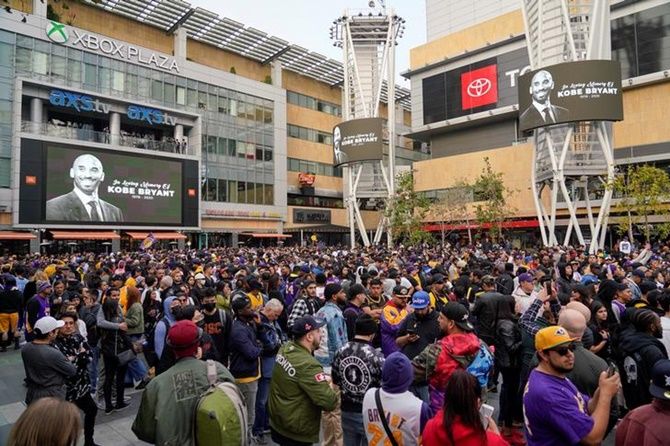 IMAGE: Mourners gather in Microsoft Square near the Staples Center to pay respects to Kobe Bryant, who was killed at age 41 on Sunday in a helicopter crash near Los Angeles along with his 13-year-old daughter and seven others on board. Photograph: Kyle Grillot/Reuters

The sporting world was plunged into mourning on Sunday as news of Kobe Bryant's death in a helicopter crash spread leaving the rich and famous, presidents, Hall of Famers and ordinary fans stunned.

A true global superstar, the depth of Bryant's popularity quickly surfaced as reports were confirmed that the Los Angeles Lakers great had been killed along with his daughter Gianna and seven others when his helicopter crashed in a remote field near the city of Calabasas.

As the deaths were confirmed social media exploded in grief while television programming was interrupted to report on the tragedy with video showing smoke billowing from the crash site as first responders put out the flames.

US President Donald Trump was among the first to take to Twitter to express his shock.

"Reports are that basketball great Kobe Bryant and three others have been killed in a helicopter crash in California. That is terrible news!" tweeted Trump. 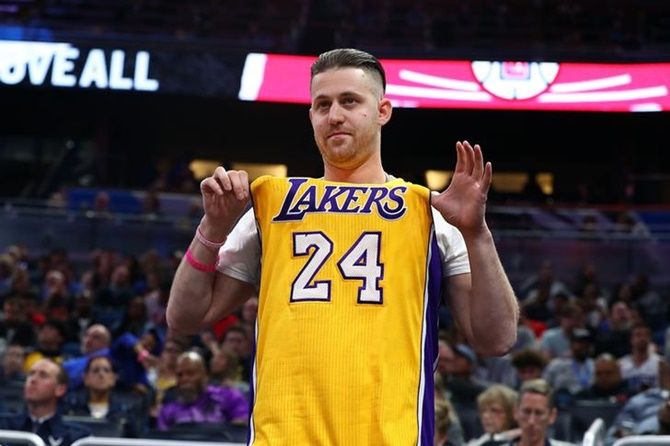 Trump and former US President Barack Obama agree on little but were united in their grief over the five-time NBA champion's untimely passing.

"Kobe was a legend on the court and just getting started in what would have been just as meaningful a second act. To lose Gianna is even more heartbreaking to us as parents," Obama wrote on Twitter.

Where Bryant's death hit close to home was on the basketball courts, where his skill and personality made him one of world's most recognisable and popular athletes.

"The NBA family is devastated by the tragic passing of Kobe Bryant and his daughter, Gianna," NBA commissioner Adam Silver said in a statement. “For 20 seasons, Kobe showed us what is possible when remarkable talent blends with an absolute devotion to winning.

"He was one of the most extraordinary players in the history of our game with accomplishments that are legendary: five NBA championships, an NBA MVP award, 18 NBA All-Star selections, and two Olympic gold medals.

"He will be remembered most for inspiring people around the world to pick up a basketball and compete to the very best of their ability."

But perhaps it was three-time NBA champion Dwyane Wade who best expressed the disbelief and sadness that washed over the league, tweeting: "Nooooooooooo God please No!"

Two of the greatest players of all-time, Hall of Famers Bill Russell and Kareem Abdul-Jabaar, praised Bryant as one of the best ever to set foot on the court but noted he was an even better person.

"Most people will remember Kobe as the magnificent athlete who inspired a whole generation of basketball players," tweeted Abdul-Jabaar. "But I will always remember him as a man who was much more than an athlete."

No group was left more devastated than the Lakers family that Bryant had been a part of for 20 seasons as a player.

"As I try to write this post, my mind is racing. I’m in disbelief and have been crying all morning over this devastating news that Kobe and his young daughter, Gigi have passed away in a helicopter crash. Cookie and I are heartbroken," Lakers Hall of Famer Magic Johnson wrote on Twitter. 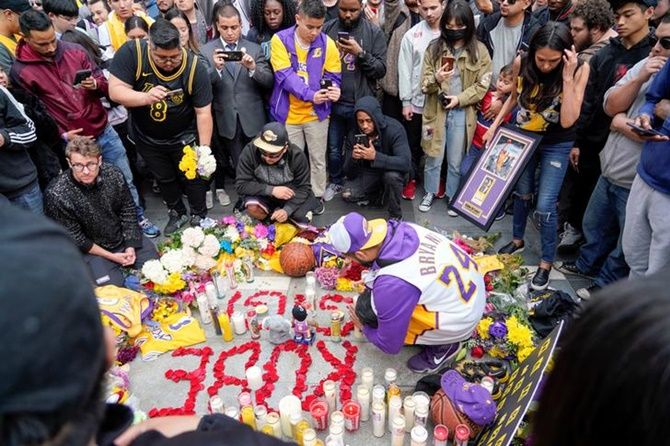 IMAGE: Mourners place tributes as they gather in Microsoft Square near the Staples Center to pay respects to Kobe Bryant. Photograph: Kyle Grillot/Reuters

As a slate of NBA games tipped off on Sunday, teams and players searched for ways to pay tribute to the man they knew as "Mamba".

The NBA champions Toronto Raptors and San Antonio Spurs honoured Bryant by both choosing to run out the shot clock on their opening possessions.

It was not just basketball fans left blindsided by Bryant's death, as tributes poured in from other athletes, other sports, on other fields, golf courses and arenas around the globe.

In France, Brazil soccer international Neymar dedicated his goal scored from a penalty for Paris St Germain at Lille in a Ligue 1 match on Sunday to Bryant, holding up two and four fingers (Bryant's retired jersey number), putting his hands together in prayer and bowing before the crowd.

"It's very sad for the world of sport and for all of us, not just for the basketball fans as he did so much for sport in general," said Neymar. "I hope he will rest in peace."

"A legend in one sport who loved, and was loved in, ours," tweeted FIFA, world soccer's governing body.

It was not just the sports world left crushed as Bryant's popularity cut across cultures and countries.

Being a Hollywood fixture, the death of Bryant, who also won an Oscar to go along with his five NBA titles, sent shock waves through the music, entertainment and business worlds as well.

"It can't be. You always encouraged me mamba. Gave me some of the best quotes that we smile about to this day! Love you man!" tweeted singer Justin Bieber.

At the end of the day those impacted most, however, were Bryant's ordinary fans, who took to social media in millions in an outpouring of sadness.

"Feels like a bad dream," wrote Twitter user @mischiefluis. "Kobe’s the reason I love the game. My super hero. My heart breaks for his family and the other 4 individuals involved.

© Copyright 2022 Reuters Limited. All rights reserved. Republication or redistribution of Reuters content, including by framing or similar means, is expressly prohibited without the prior written consent of Reuters. Reuters shall not be liable for any errors or delays in the content, or for any actions taken in reliance thereon.
Related News: Kobe Bryant, NBA MVP, Gianna, Los Angeles Lakers, IMAGE
COMMENT
Print this article 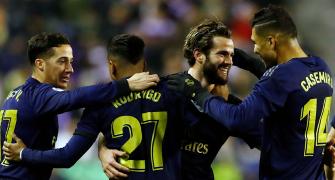 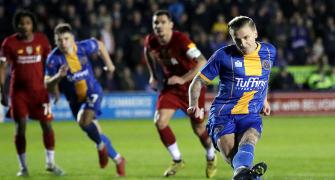