News
Business
Movies
Sports
Cricket
Get Ahead
Money Tips
Shopping
Sign in  |  Create a Rediffmail account
Rediff.com  » Sports » Emotional Djokovic wants to be his own man 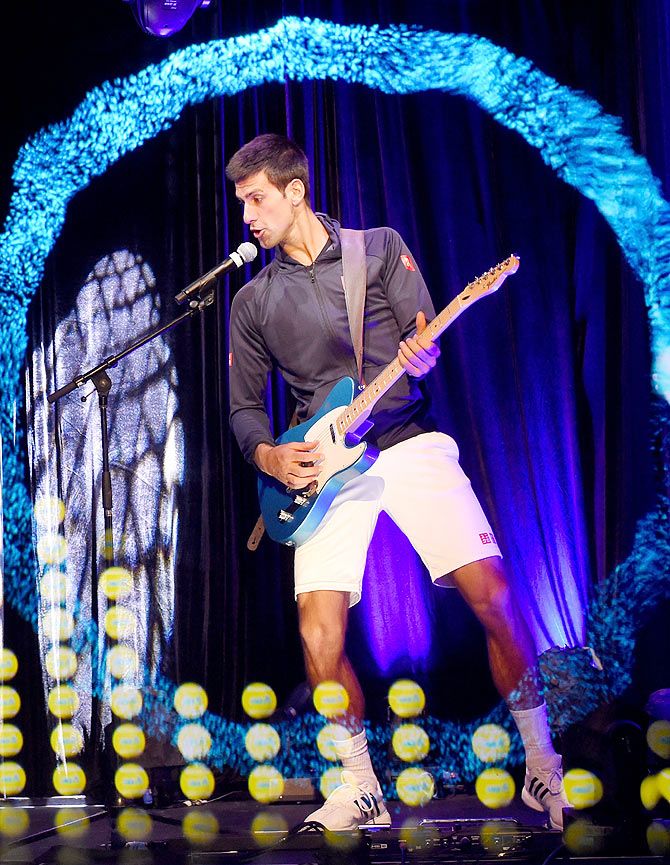 Novak Djokovic's flamboyant on-court demeanour may be occasionally unacceptable but it is an integral part of his success, the world number one said.

In a pre-recorded appearance on Serbian state television aired on Monday night, the 27-year old from Belgrade also confirmed he would lead Serbia in their March 6-8 Davis Cup first-round home clash with traditional rivals Croatia.

"Mangling my racket and an odd swearword on the court is not something I am proud of and it shouldn't happen," said Djokovic, who won his fifth Australian Open title in Melbourne last month.

"But even my coaches have told me that it's sometimes better to let it all out, the anger inside you, because keeping it bottled would just eat you up in the long term.

"I want to be my own man. I don’t like duplicity and hence I want to be sincere and speak my mind every time. Sometimes my emotions may seem unacceptable but that’s me." 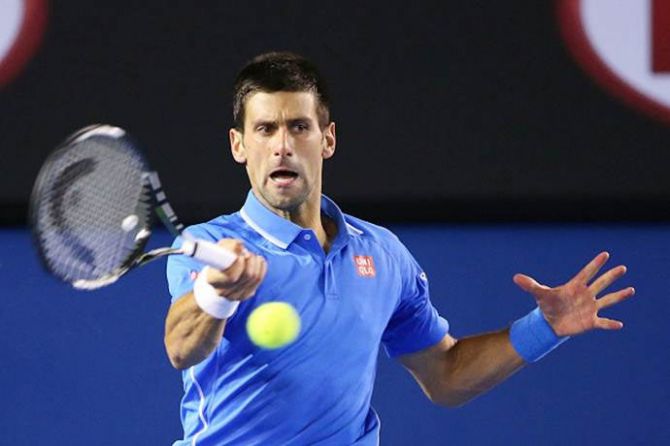 Novak Djokovic of Serbia plays a forehand during his semi-final match against Stanislas Wawrinka of Switzerland at the Australian Open. Photograph: Scott Barbour/Getty Images

Djokovic is currently in the United Arab Emirates where he faces Canadian Vasek Pospisil in the first round of the ATP 500 Dubai tennis championships later on Tuesday.

The world number one also dwelled on his enviable fitness which has played a crucial part in winning eight grand slam titles.

"I never once contemplated taking banned substances and I could never do such a thing because I have been brought up in a different manner.

"The people around me would never mention or even think that I should consume something which would enable a quicker recovery after matches.

"I owe a lot to my genes as my grandfather is 78 and is still able to play volleyball, but the crux of it is in various recovery techniques ranging from stretching out to ice-baths."

"Given their long-term success, Federer and Nadal are still the two most popular players although I am the world number one. Novak Djokovic of Serbia celebrate a point against Radek Stepanek of Czech Republic during the day one of the final Davis Cup match between Serbia and Czech Republic on November 15, 2013 in Belgrade. Photograph: Srdjan Stevanovic/Getty Images

"But I hold nothing against anyone for that, to the contrary. It enables me to grow in a different way devoid of a certain kind of pressure.

"I wouldn't say that I am not respected enough abroad and although I don’t always look back at criticism that comes my way, I am aware that it’s part of the process because it offers a different perspective."

Winners in 2010 and finalists in 2013, Serbia will have another shot at the Davis Cup title and Djokovic was delighted that the tie against Croatia was awarded to Kraljevo.

"It will help promote tennis in Serbia and it's only the second time I will play a Davis Cup match outside Belgrade.

"We have a strong team and expect to win but although the Croatians will miss Marin Cilic and Ivo Karlovic, we have to beware of the young Borna Coric who reminds me of my younger self and has a very bright future."

© Copyright 2022 Reuters Limited. All rights reserved. Republication or redistribution of Reuters content, including by framing or similar means, is expressly prohibited without the prior written consent of Reuters. Reuters shall not be liable for any errors or delays in the content, or for any actions taken in reliance thereon.
Related News: Novak Djokovic, Serbia, Getty Images, Roger Federer, Rafael Nadal
COMMENT
Print this article