The result leaves Chile and Bolivia on four points, ahead of Mexico on two and Ecuador bottom without a point. 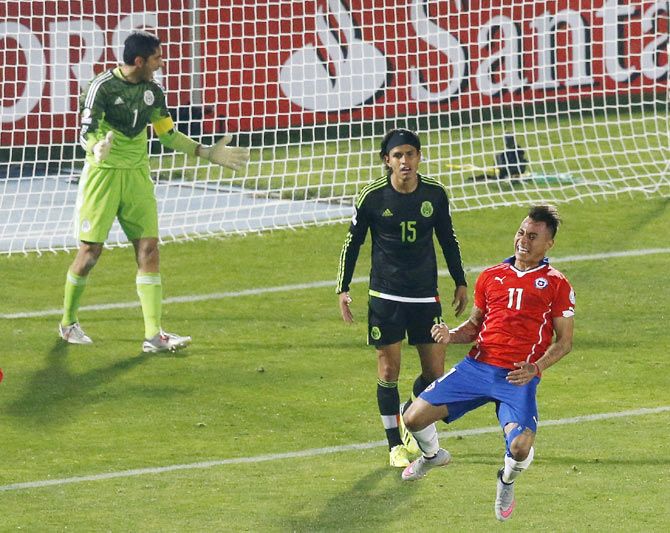 Hosts Chile had to come from behind twice before themselves being pegged back by Mexico in a thrilling 3-3 Group A clash at the Copa America on Monday.

Mexican striker Matias Vuoso and Chile midfielder Arturo Vidal both scored twice in a game that roared from end to end and never let up in intensity.

The result leaves Chile and Bolivia on four points, ahead of Mexico on two and Ecuador bottom without a point.

Chile face Bolivia in their final group game in Santiago while Mexico face Ecuador in Rancagua, both on Friday.

Vidal said Chile were improving as the tournament wore on.

"It was a tough match, an end-to-end match, but the important thing is that we played better than in our opening game and we’re getting better,” Vidal said. “Now comes the match against Bolivia and we need to be at 100 percent.”

Both sides went on the offensive from the outset and it was the Mexicans who took the lead in the 21st minute. Jesus Corona crossed from the left, Juan Carlos Medina knocked the ball back across the face of goal and Vuoso stabbed a left-foot shot past goalkeeper Claudio Bravo from close range, silencing nearly 50,000 fans in Santiago’s national stadium.

That stunned silence did not last long as a minute later the Chileans were level, Vidal escaping his marker at a corner to power an unstoppable header into the bottom right-hand corner.

In the 28th minute Bravo tipped a Gerardo Flores header onto the underside of his crossbar and the Chilean defenders scrambled the ball to safety but with their next attack, the Mexicans restored their lead.

Raul Jimenez's looping header from a corner should have been saved by Bravo but the keeper was off his line and the ball ended up in the net.

Chile pulled level again three minutes before the break, Vidal crossing from the right for Eduardo Vargas, who escaped some suspect Mexican marking to plant another firm header into the back of the net. Chile then took the lead for the first time in the match in the 55th minute with Vidal scoring from the penalty spot after he had been pulled down in the box by Gerardo Flores.

Mexico refused to give up and on 66 minutes Vuoso scored his second, beating the offside trap and running on to a long ball from Adrian Aldrete before chipping the ball over Bravo.

The Chileans poured forward in search of a winner and AlexisSanchez appeared to have found it when he met a cross from the right and slammed the ball home from close range, but the linesman ruled he was offside.

“Maybe it was a good match for the spectators but we were hoping for another kind of match and another result,” Bravo said. Bolivia scored three first half goals and then withstood heavy second half pressure to overcome Ecuador 3-2 on Monday in the highest scoring match of the Copa America so far.

Ecuador had not lost to Bolivia in the tournament since 1949 but they were soon trailing as Bolivia launched an opening blitz in the Group A match.

Bolivian captain Ronald Raldes got the first in five minutes when he stooped to head home a corner kick from Martin Smedberg-Dalence, who doubled the lead 13 minutes later when he side-footed home from 25 yards out.

Ecuador should have pulled a goal back from the penalty spot after 38 minutes but Enner Valencia had his kick saved at the second attempt after the referee order his first to be retaken when a Bolivian player encroached into the 18-yard box.

Marcelo Martins made no such mistake at the other end five minutes later when Bolivia were awarded a penalty for dangerous play. With a strong wind behind them in the second half Ecuador stormed forward and got a goal back in the 47th-minute when West Ham striker Enner Valencia had a simple tap in.

Miler Bolanos narrowed the deficit with a fierce 35-yard drive in the 81st minute and although they kept pressing, with Christian Noboa hitting the bar with six minutes to go, Bolivian goalkeeper Romel Quinonez was in fine form and able to preserve his side's lead.

The win was Bolivia's first in the Copa America since 1997 and takes them to the top of Group A with four points following last week's 0-0 draw with Mexico.

Chile, who beat Ecuador 2-0 in the tournament opener, play Mexico later on Monday.

© Copyright 2021 Reuters Limited. All rights reserved. Republication or redistribution of Reuters content, including by framing or similar means, is expressly prohibited without the prior written consent of Reuters. Reuters shall not be liable for any errors or delays in the content, or for any actions taken in reliance thereon.
Related News: Arturo Vidal, Ecuador, Claudio Bravo, Chile, Bolivia
COMMENT
Print this article