Images from the 2022 Commonwealth Games Opening Ceremony, at Alexander Stadium in Birmingham, on Thursday. 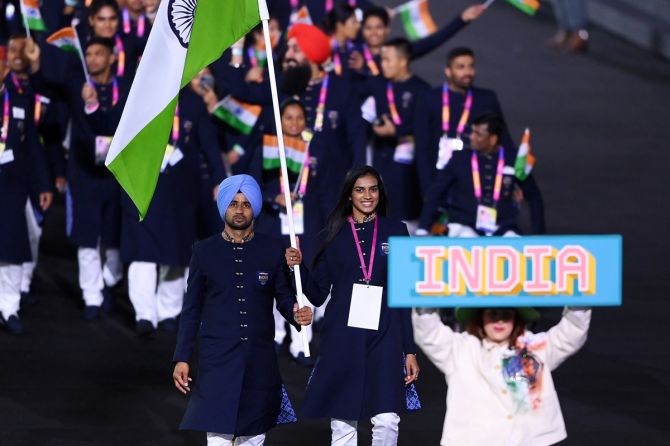 The 22nd Commonwealth Games got underway on Thursday with a grand opening ceremony amid much fanfare, showcasing the very best of Birmingham and the United Kingdom.

Ten years after the 2012 London Olympics it was Birmingham's moment in the spotlight, although a smaller one, as Prince Charles, reading a message on behalf of The Queen contained in a Baton that had travelled through all 72 nations and regions of the Commonwealth, declared the Games open.

Drummer-percussionist Abraham Paddy Tetteh kicked off the proceedings at the Alexander Stadium before Indian classical vocalist and composer Ranjana Ghatak took over, the section intending to showcase the diversity of the city of Birmingham. IMAGE: Members of the Indian contingent wave the tricolour during the athletes' parade. Photograph: Stoyan Nenov/Reuters

The Games, set to be the biggest and most expensive sporting event in the UK since the 2012 London Olympics, have had to deal with the adverse impact of the COVID-19 pandemic.

Thursday's slick show marked the beginning of 11 days of sporting action in the city, with 19 events over 15 venues in the West Midlands. Seven of those will be contested in Birmingham, the UK's second-largest city, with a population of 1.15 million.

More than 5000 athletes from 72 countries will compete in 280 events across 19 disciplines.

The UK is hosting the mega event for the third time in the last 20 years with the Commonwealth Games Federation (CGF) unable to attract new bidders out of the 56 countries that make up the sporting body due to cost constraints.

Having stepped up to host the Games after South African city Durban pulled out because of financial constraints, the organisers went ahead without any change in the original schedule at a time when both the the 2020 Tokyo Olympics and this year's Asian Games were postponed by a year owing to COVID-19.

India have fielded a 321-strong contingent, which includes 215 athletes, 107 officials and support staff.

India bagged 66 medals in the previous edition of the Commonwealth Games at the Gold Coast in Australia in 2018.

The Opening Ceremony was a spectacular show of Birmingham's culture and diversity. As many as 70 cars in red, white and blue got together to form a Union Jack, even as Prince Charles, representing Her Majesty Queen Elizabeth II, arrived in his Aston Martin car along with the Duchess of Cornwall. The formation of cars was a tribute to the city's incredible motor industry history.

Just before that, the city paid a tribute to the Queen, even as a montage featuring her stretched back to the black and white era.

The evening paid a tribute to Charlie Chaplin, the legendary comedian being hailed as one of the city's heroes. Between London and Birmingham, his place of birth, in fact, has been subject of much debate.

There was an honorary mention of William Shakespeare too, as the broadcasters spoke about the Shakespeare First Folio which is in the new Library of Birmingham -- the largest public library in the UK.

Through its printing press, the place's history was shown in all its glory. Then arrived a gargantuan bull in the stadium, pulled along by overworked, underpaid female chain makers of the Industrial Revolution. Till the time the raging bull was there going on a rampage, it was the cynosure of all eyes at the glittering ceremony.

'Perry the Bull', the Games mascot, got its name because of the city's iconic Bull Ring market, which has been around for hundreds of years.

"I believe this event will be one of the greatest and most important editions of the Commonwealth Games in our 92-year history," she added. Then began the Parade of Nations. As per CWG tradition, Australia, being the host of the last Games, entered first during the Parade, followed by the rest of the Oceania region.

Then, other countries made their way into the arena in alphabetical order from their respective regions.

The countries from Africa, America, Asia, the Caribbean followed, and then came the turn of 2010 Games host India

As is the norm, hosts England entered last with We will, we will rock you playing in the background.

Birmingham got into the spirit of the Mexican Wave right at the start of the ceremony showcasing grandeur, rich culture, diversity and heritage.

The ceremonial Commonwealth Games flag was brought out and hoisted after which CGF president Martin walked out to give a speech, at the end of which the Prince of Wales read out the Queen's message to declare the Games open.

LGBTQ+ activist and British Olympic champion Tom Daley, a winner of four Commonwealth golds in the pool, brought the Queen's Baton into the Alexander Stadium accompanied by a entourage of LGBTQ+ flag-bearers. One of the highlights of the two-and-half-hour long ceremony was local favourite chart-topping band Duran Duran who delivered the finale to the stunning night in the city where their career began 44 years ago. 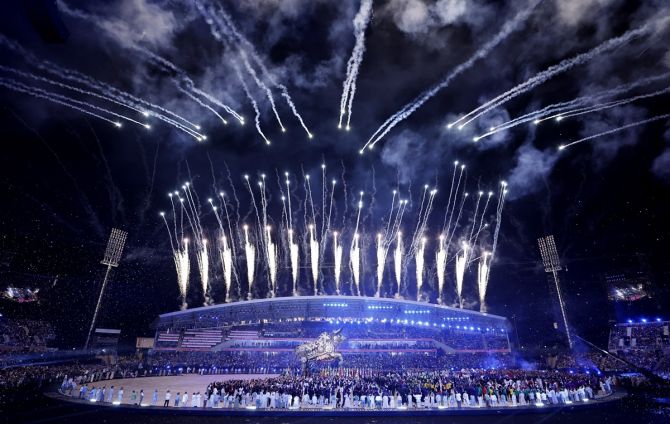 IMAGE: The opening ceremony delivered all the classic staples of an opening night extravaganza from the parade of athletes to a shower of thundering fireworks. Photograph: Stefan Wermuth/Reuters

A massed choir of over 700 voices, comprising 15 choirs from across the West Midlands reverberated the arena, led by Carol Pemberton and Black Voices, one of Europe's leading female Acapella groups.,/p>

The Royal Marines dished out a rousing trumpet fanfare, while Grammy-winning guitarist Iommi and saxophonist Soweto Kinch led a dream sequence entitled Hear my Voice, based on the title track from 2020 film Trial of the Chicago Seven, re-imagined by Birmingham-born R&B vocalists Indigo Marshall and Gambimi.

Creator of acclaimed British crime drama 'Peaky Blinders', Steven Knight was the creative mastermind behind the ceremony that had more than 2,000 performers tracing the story of the city's glorious past and present, while also reflecting the links between the 72 countries and territories in the Commonwealth Games. 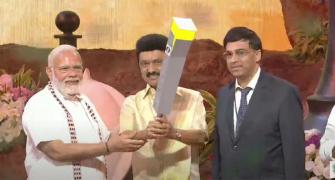 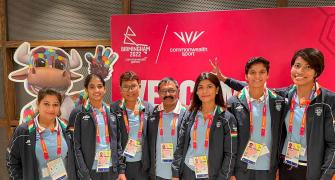