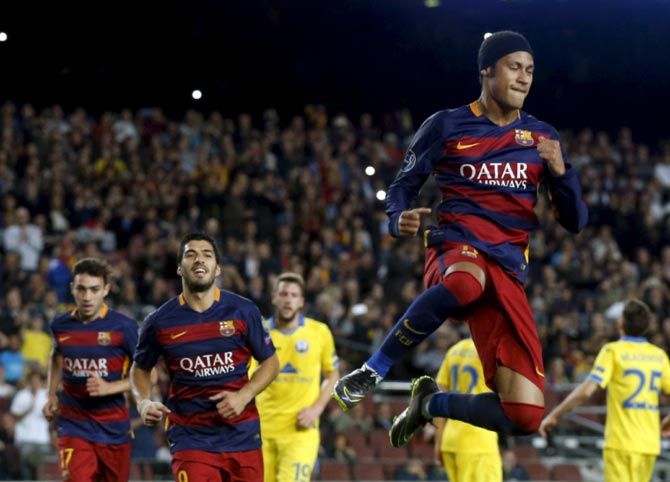 A Neymar double and a clinical finish from Luis Suarez handed Barcelona a comfortable 3-0 victory over BATE Borisov that put them on the verge of qualifying for the last 16 of the Champions League for the 12th consecutive season.

The Brazilian beat keeper Sergei Chernik with his spot-kick after 30 minutes following a foul on substitute Munir El Haddadi by Filip Mladenovic.

Neymar was the provider for Suarez who slotted home into the corner after 60 minutes.

Suarez then crossed for Neymar to slide the ball home after 83 minutes.

The pair have been the driving force behind Barca in the absence of the injured Lionel Messi and now have 13 goals between them from five games.

"Obviously we miss Leo, he is the best in the world but I am going through a good run at the moment," Neymar told reporters.

"We are very pleased with the victory. For the third goal I made a long run for the ball and half the goal has to go to Suarez for the pass." Fans turned up carrying Catalan flags and the UEFA anthem ahead of the kick-off was drowned out by whistles as they protested against a second fine for Barca, which they are appealing, for displaying political emblems.

Barca moved the ball around swiftly but the first real danger surprisingly came from BATE with keeper Marc-Andre ter Stegen beating away a fiercely struck free-kick by Igor Stasevich on the edge of the area after 17 minutes.

Andres Iniesta made his first start since picking up an injury at the end of September but Barca were dealt a blow with Ivan Rakitic limping off and he was replaced by Munir.

It was the youth product though that was hauled down by Filip Mladenovic after combining with Suarez, and Neymar dispatched the penalty.

Full-back Adriano clipped the outside of the post and Neymar headed just over before half time with Barca in control.

After plenty of pressure Barca finally scored again with Suarez showing once again his prowess in front of goal and then he found Neymar to wrap up the scoring.

Gent beat Valencia to stay in race for knockout stages Belgian champions Gent stayed in the race for the second spot of Champions League Group H by beating an innocuous Valencia 1-0 at home.

With Lyon losing at a flawless Zenit, Gent, who entered the Champions League for the first time this season, are now in third spot with four points. Valencia are second with six points.

Itching to forget their outing in Valencia, where they lost by scoring two own goals, Gent put pressure on the visitors from the start, with Laurent Depoitre having a first effort on goal in only the second minute.

Gent, currently leading the Belgian league, created many chances by thundering past Valencia's flanks but it was a performance that was not reflected on the scoreboard after 45 minutes.

The much deserved goal came in the 49th minute when Sven Kums converted a penalty awarded after Antonio Barragan touched the ball.

While Gent's performance appeared slightly more nervous at the end of the second half, the hosts maintained their lead until the final whistle. 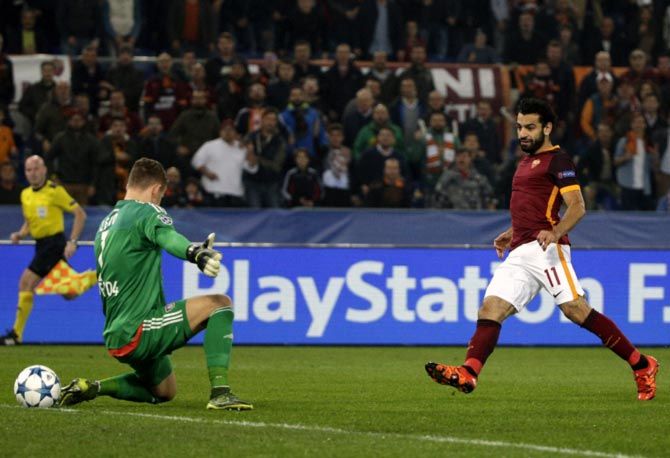 AS Roma squandered a two-goal lead but recovered to beat Bayer Leverkusen 3-2 following a late Miralem Pjanic penalty on Wednesday to move into second place in Champions League Group E.

The Italian side moved on to five points, five behind leaders Barcelona and one ahead of third-placed Leverkusen following their first win of the group stage.

Roma exposed the visitors’ defensive frailties with goals from Mohamed Salah and Edin Dzeko inside the first half hour, but Leverkusen levelled six minutes into the second period after a quickfire double from Admir Mehmedi and Javier Hernandez.

However, an 80th-minute penalty scored by Pjanic -- following Omer Toprak’s goalline push on Salah -- earned the visiting captain a red card and secured victory for the home side.

“We certainly don’t get bored when these two teams play each other,” Roma coach Rudi Garcia told Mediaset.

“We could have scored more goals in the first half and after the break there was this black-out, but we had the character to get back into it.

“The lads did well, because there are teams who would crumble if going from 2-0 to 2-2 in five minutes.”

Barcelona’s 3-0 home win over BATE Borisov extended the defending champions’ lead at the top of the standings and they will qualify as group winners if they avoid defeat by Roma in their next match.

Roma heeded Garcia’s pre-match calls to attack Leverkusen and it took less than two minutes to open the scoring.

Counter-attacking at pace, Salah’s shot beat Bernd Leno after he was played in by a superb pass from Dzeko on two minutes.

Roma doubled their lead with a strikingly similar goal, Radja Nainggolan beating his man just inside the home side’s half before threading the ball to Dzeko who finished with aplomb on 29 minutes.

Just as they had done in the first match between the teams -- a 4-4 draw —- Leverkusen fought back, scoring twice within the first six minutes of the second half to stun the home fans.

Mehmedi met Kevin Kampl’s cut back with a powerful angled drive that nestled in the roof of Wojciech Szczesny’s net on 46 minutes and Hernandez made it 2-2 after being found by Karim Bellarabi’s excellent pass in the 51st.

Roma retook the lead after 80 minutes when Tobrak pushed Salah into the net as the Egypt forward was about to pull the trigger from close range.

The Leverkusen captain was shown a straight red card and Pjanic beat Leno from the spot.

“We cannot keep disappearing in the opening five minutes of the second half in these big games,” said Dzeko.

“We have to improve this aspect, both in defence and in our overall mentality.” 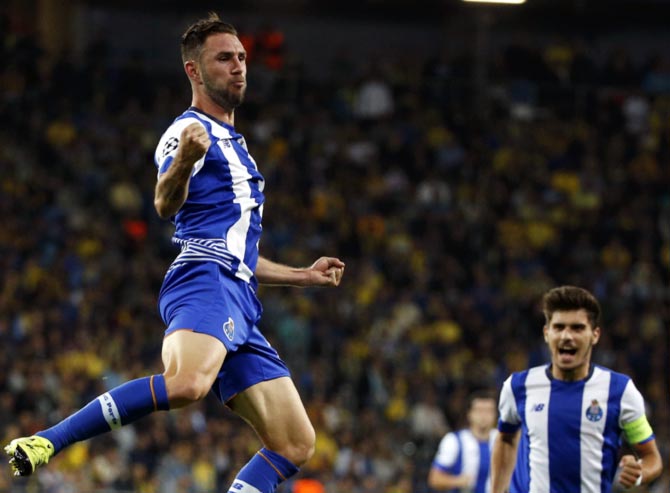 Porto edged closer to a spot in the knockout rounds of the Champions League with a comfortable 3-1 win over Maccabi Tel Aviv in Group G on Wednesday, which ended the Israeli side's faint hopes of reaching the last 16.

Despite Maccabi showing some flourishes in front of an enthusiastic home crowd in the northern Israeli city of Haifa, the Portuguese visitors were too strong for their Israeli hosts.

Cristian Tello, Andre Andre and Miguel Layun scored for Porto, while Eran Zahavi registered the Israeli outfit's first goal in the competition after three previous defeats in the group.

Tello put Porto ahead in the 19th minute when Predrag Rajkovic came hesitantly off his line and was caught in no-man's land allowing the Porto forward to slot home easily from the right.

Andre made it 2-0 in the 49th minute with a close-range header that dampened Maccabi's hopes of getting back into the match. Despite some occasionally promising attacks, Maccabi had difficulty keeping up with their superior opponents.

The unmarked Layoun curled in a perfect shot from the left corner of the area for Porto's third in the 72nd minute and three minutes later, Zahavi scored from the penalty spot and gave the home fans cause to cheer.

Porto top the group with 10 points, three clear of second place Chelsea. Dynamo Kiev are third with five and Maccabi are bottom with no points.

The Israeli side could still theoretically finish in third place and qualify for the Europa League in the unlikely event that they can beat Dynamo Kiev away and Chelsea at home.

© Copyright 2021 Reuters Limited. All rights reserved. Republication or redistribution of Reuters content, including by framing or similar means, is expressly prohibited without the prior written consent of Reuters. Reuters shall not be liable for any errors or delays in the content, or for any actions taken in reliance thereon.
Related News: Neymar, BATE Borisov, Leverkusen, Barca, Luis Suarez
COMMENT
Print this article