In prime form, India’s Lahiri in sight of spot at the Presidents Cup after an opening two-under 70 at Whistling Straits followed by a six-birdie 67 to conclude the storm-delayed second round on Saturday Anirban Lahiri of India chats with the media after a five-under par 67 during the continuation of the weather-delayed second round of the 2015 PGA Championship at Whistling Straits in Sheboygan, Wisconsin, on Saturday. Photograph: Andrew Redington/Getty Images

India golfer Anirban Lahiri is making the country proud and on India’s 68th Independence Day, he gave his countrymen a couple of big reasons to be proud.

A strong showing by Lahiri at the PGA Championship has put the Indian golfer in a prime position to achieve one of his biggest goals for this year -- a spot on the International team at the Presidents Cup.

Playing only his seventh Major, Indian golfer Anirban Lahiri set himself up nicely for a career-best finish as he turned in a two-under 70 to be tied eighth after the third round of the PGA Championship.

An opening two-under 70 at Whistling Straits followed by a six-birdie 67 to conclude the storm-delayed second round on Saturday also strengthened Lahiri's burgeoning belief that he is good enough to compete with the game's very best.

Lahiri's cards of 70-67-67 have also broken a string of record for Indians at Majors.

Placed tied eighth as of now, he is bidding to become the first Indian to win a Major and only the second from Asia to win a Major after YE Yang's effort at the 2009 PGA Championships.

Lahiri is at nine-under 207 and six shots behind the leader, Jason Day of Australia.

Lahiri, who shot sub-par scores in each of his first three rounds at The Open last month, repeated the feat at Whistling Straits, to make it two in a row.

His spectacular 67 in the second round saw him tied-fourth, the best an Indian player has been placed at that stage at any Major.

Interestingly, Jeev had shared the lead after the first round at 2008 PGA Championships, but was tied eighth after the second round, tied seventh after third and finished tied ninth at the end of the tournament.

Lahiri is playing his seventh Major, of which six have come in succession. He has made the cut in four and his best has been T-30 at British Open this year.

Last year he played the PGA Championships for the first time and missed the cut.

Lahiri, only the second Indian to make Top-50 of the world, has won seven titles in Asia, of which two -- Malaysian Open  and Hero Indian Open -- were co-sanctioned with European Tour.

"Playing at the Presidents Cup would mean the world to me," Lahiri, 28, told Reuters after rocketing up the PGA Championship leaderboard into a tie for fourth at seven-under 137, four strokes off the lead.

"Growing up you watch events like the Presidents Cup and the Ryder Cup, and last year I was fortunate enough to be a part of the inaugural EurAsia Cup, and part of a team that came from a whitewash on day one to level it at 10-10 against Europe.

"It's feeling that does not compare. I've won several times now in Asia and Europe and it's a different kind of thrill when you don't play for yourself."

As things stand, Lahiri would be an automatic selection for the Internationals team to take on holders the United States in Incheon, South Korea from October 8-11.

The leading 10 players in the points standings on September 7 will qualify for the Presidents Cup, and captain Nick Price will then add his two wildcard picks the following day.

Lahiri, 28, a two-time winner on the European Tour this year who has set his sights on securing a US PGA Tour card, is ninth in the standings and would all but lock up his spot with a good finish on Sunday.

"I am hitting it good and I feel I'm playing well enough to be playing on the Presidents Cup team," said the Bangalore resident, who birdied four of his last seven holes at Whistling Straits to soar up the second-round leaderboard.

"I just need to keep playing well. When I played for Asia last year, it was massive. At the Presidents Cup, you're playing for the Internationals which is pretty much the rest of the world if you take Europe out of it, so that would be huge." 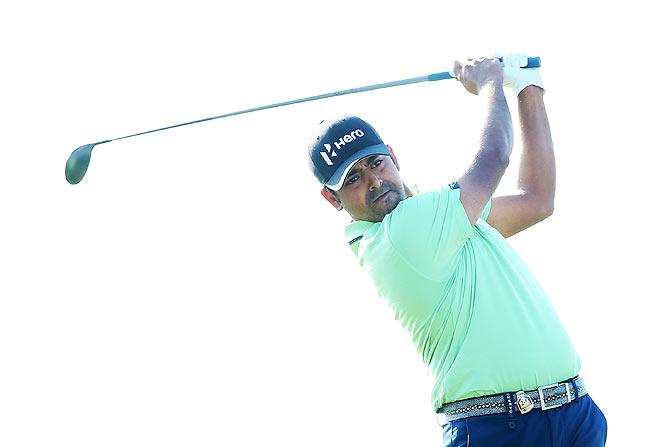 India's Anirban Lahiri plays his shot from the ninth tee during the continuation of the weather-delayed second round of the 2015 PGA Championship at Whistling Straits on Saturday. Photograph: Andrew Redington/Getty Images

Lahiri, who won his first European Tour title at the Malaysian Open in February before adding a second later that month on home soil at the Indian Open, initially struggled for form when he switched his focus to the PGA Tour.

However, the world number 53 has played in all of golf's elite events this season -- the four majors and the World Golf Championships events -- and he now believes he belongs in that company.

"I came over here to the US and I initially tried to do things differently, I didn't stick with what I'd done when I've played my best in the past," said Lahiri, a seven-times winner on the Asian Tour where he leads the order of merit this season.

"But I've learned from that and I've gone back to my old routine, just sticking to my own strengths and working with those. I think it's enough to win out here, and that's where the belief comes from.

"I feel like I can compete and it's good to have evidence of that this week at Whistling Straits."