P V Sindhu became only the second Indian and the country's first woman to bag two Olympic medals after winning the bronze in women’s badminton at the Tokyo Games on Sunday.

The reigning World champion scored a straight-games victory over China’s world No. 9 in the third-place play-off.

There was also reason to celebrate as India’s men’s hockey team made it to the semi-finals after 49 years.

The eight-time Olympic champions beat Great Britain to set up a meeting with World champions Belgium.

The country’s last semi-finals appearance at the Games was in 1972 at Munich, where they lost 0-2 to arch-rivals Pakistan.

Here's a summary of the country's athletes' showing at the Games on Sunday, August 1.

Fouaad Mirza placed 22nd after cross-country round in individual eventing. 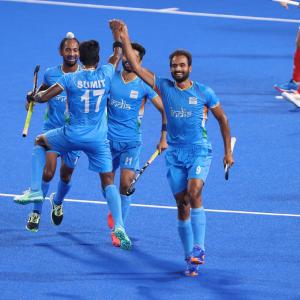