Already assured of a place in the summit clash, favourites India had to sweat it out before defeating Poland 4-2 in the final round-robin match of the men's Olympics hockey qualification tournament, in Delhi, on Friday.

With this victory, India, not only maintained their unbeaten run in the tournament, but also dashed Poland's London dreams, as the European side needed at least a draw or a win to secure a place in Sunday's final. 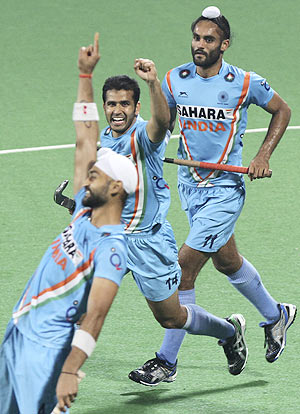 No 18-ranked France will be India's opponent in the title clash after the former held Canada to a 1-1 draw in an earlier game.

Sandeep Singh (26th and 70th minutes) once again starred for India, converting two penalty-corners to take his personal goal tally in the tournament to 11.

For Poland Tomasz Dutkiewcz (13th) and Miroslaw Juszczak (63rd) sounded the board.

India's women's team also made it to Saturday's final after a hard-fought 1-0 victory over Italy in their last round-robin match, to set up a summit clash with South Africa.

India, needing nothing less than a victory, were made to toil by the Italian defence but their never-say-die attitude finally earned them a goal in the
55th minute when Ritu Rani scored off a rebound after the ball had ballooned up following a penalty-corner.

Earlier in the day, South Africa sealed a place in the final after beating Canada 4-1.

Contrary to the final scoreline in the men's concluding league match, the Indians were made to work by the Polish team. Even though India had the lion's share of possession, they wasted numerous scoring opportunities, courtesy poor finishing by the forwards.

The home team also cut a sorry figure, being unable to convert penalty-corners; they scored from just three of the nine earned in the match. Poland scored from two of the three they forced.

Credit must also go to Polish custodian Mariusz Chyla, who was brilliant, and denied the Indians on numerous occasions. 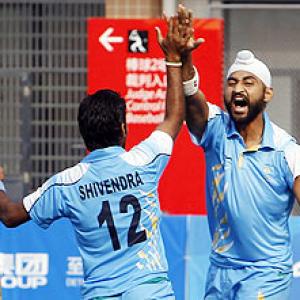