Indian eves continued their winning run with a comfortable 3-0 victory over Poland in their third match of the qualifier for the London Olympics, at the Dhyan Chand National Stadium, in New Delhi on Tuesday. 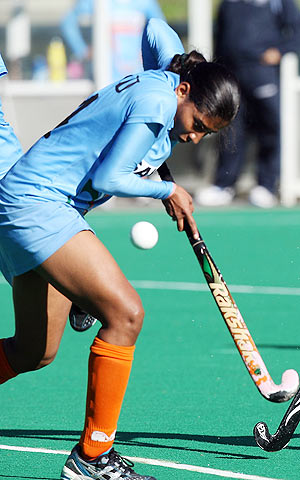 Deepika Thakur was adjudged the Player-of-the-match.

With full points from the match, Indian women now have seven points from three outings but are on top of the table as they enjoy a better goal difference than South Africa.

After a day's break, both the teams took time to get off the mark but it was the home team who had the first shy at the opposition goal when in the fifth minute, Deepika shot wide from top of the D after being fed by Asuntha Lakra.

India soon upped the ante and in the 21st minute, Rani Rampal had an opportunity to extend the lead but her attempt was wide off the target.

The 'Women in Blue' squandered a number of chances with Vandana Katariya missing the easiest of them as all she needed to do was tap the ball in.

Just four minutes from the half time, India had another opportunity to score on the counter attack but Ritu Rani's shot from the right flank was too fast for others to collect.

India thus went into the breather with a 1-0 lead.

Just after the change of ends, it was Rani Rampal who rounded off the tally as she dribbled past three defenders and the goalkeeper to find the back of the net.

The hosts earned their first penalty corner in the 40th minute but Lakra's hit went over the post. Two minutes later, India earned another short corner but once again they squandered the chance.

Poland also had their moments when between 45th to 47th minute, they earned three penalty corners but the visitors failed to convert the chances to continue their wait for a first goal.

The Polish team were awarded another penalty corner in the 55th minute but once again they failed to score as Indian defence was up for the job.

Eight minutes off the final hooter, Poonam Rani made it 3-0 in India's favour. After latching on to a pass from Deepika, Poonam got in perfect position to find the back of the board.