Neeraj wants to continue with coach Klaus in 2024 Games Describing his German coach Klaus Bartonietz as the 'best' for him, Olympic gold-winning javelin thrower Neeraj Chopra on Friday said he would like to continue their spectacular partnership in the 2024 Paris Games as well.

During a panel discussion at the India Today Conclave, Chopra said Bartonietz's methods suit him as the bio-mechanical expert cracks jokes even during intense sessions making training thoroughly enjoyable.

"At times, I don't like to be very serious during training sessions. Koi coach aise hote hey, danda pakadke pichhe khade hote hain (There are some coaches who stand with a stick). But Klaus sir is different," the 23-year-old said as he sat flanked by India's first individual Olympic gold-medallist Abhinav Bindra.

"When we have to be serious and intense, we are serious but sometimes he cracks jokes during sessions and that makes training enjoyable,"

"His training methods suit me and I have great bonding with him. I want to continue training with him for the next Olympics also," added the young star, who created history by winning the first athletics medal for India in the Olympics in Tokyo.

Chopra has been training with Bartonietz since 2019. He was earlier training under another German in former world record holder Uwe Hohn, who was recently released by the Athletics Federation of India due to several differences, including his salary and training methods.

Chopra also disclosed that he did just a couple of warm-up throws before the Olympic final in Tokyo as he wanted to preserve himself for the actual competition.

"Most of the finalists came out one and a half hours to two hours before the final for warm up and they were having lots of throws. But I did only two or three warm up throws.

"It was very hot in Tokyo that day and I told him that before qualification round (three days before) I did a lot of warm up throws and that left me with less energy during the actual event."

Chopra became the toast of the nation after his historic achievement in Tokyo but he faced uncertain times in 2019 after having to undergo a surgery on the elbow of his throwing arm.

"It was a very difficult time for me when I had that surgery. I had to take complete rest for 30-45 days. I overdid things in a bid to come back quickly. I was told to do slow cycling exercise but I did so much that my legs got hurt.

"I missed World Championships in which the medal winners did distances which I could have done. But I was happy that I could qualify for the Tokyo Olympics in my first international event in South Africa (early 2020)," he recalled.

Asked why he cut his long hair before the Tokyo Olympics, Chopra said, "I was taking part in competitions (in Portugal and Finland) before the Olympics wearing caps and bandanas. Sometimes, when I attacked for the final throw, the cap would fall down and it was affecting my throw.

"So, I was kind of losing focus because of that (long hair)," Chopra said in the panel discussion which also had Olympian and former tennis player Manisha Malhotra who talked about the Haryana youngster's nonchalant and easy-going nature.

Bindra said India winning an Olympic gold through Chopra 13 years after his trend-setting triumph in 2008 Beijing Games pointed to the slow development of sport in the country.

"Taking 13 years (to win another gold) is a slow progress but nonetheless Indian sport is making progress and the next decade could be India's decade in sporting development.

"Moreover, today's generation of Indian athletes are fearless, self confident and Neeraj is one among them. The kind of resources the current athletes are getting access to are comparable with those in any country."

Talking about himself, Bindra said, "I am basically a darpok (timid) and shy person, I have had self doubt all through my career, did crazy things to conquer it."

His battle with mind full of doubts is chronicled in his biography and he shared several anecdotes from it, including his decision to calm himself with a couple of Jack Daniels whiskey a night before the final in Beijing in 2008.

Chopra, on the other hand, said he can't do without good sleep before big finals.

"For me also, mental fitness and physical fitness is important. But I need good sleep before events though I could not do that before the Tokyo final," he recalled.

Asked about his social media presence, Chopra said, "It's only in spare time. When I am resting I make these videos of earlier training and post them. My main focus is my sports." 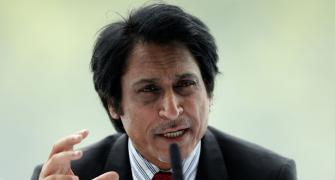 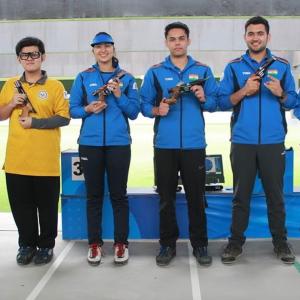 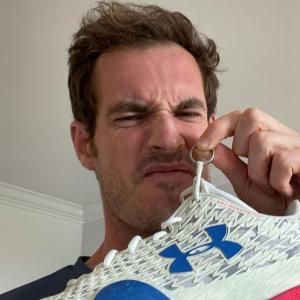