News
Business
Movies
Sports
Cricket
Get Ahead
Money Tips
Shopping
Sign in  |  Create a Rediffmail account
Rediff.com  » Sports » Of Zico and Socrates, memories of another Cup

Of Zico and Socrates, memories of another Cup 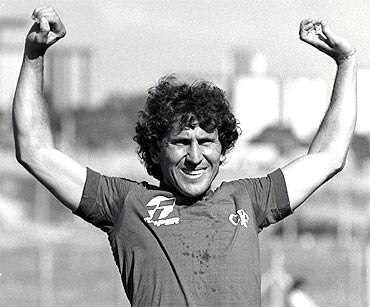 A young school boy is enraptured by tales of Brazilian soccer magic told by a classmate and falls in love with the joga bonito -- the beautiful game and the men in yellow. M P Anil Kumar travels back in time.

Circa 1978, a July afternoon. We were in the tenth standard. Our batchmate and housemate Bose K David enraptures us with his narrative of the just concluded football World Cup hosted by Argentina in June. (Since his parents resided in Abu Dhabi, unlike us, he was fortunate enough to watch the quadrennial carnival on television during the summer vacation.)

We, thenceforth, adapted our game to how the big boys played it. Among his audience, Korath, George Thomas, Radhish and myself, and Bose himself, later represented the football team of our alma mater the Sainik School, Kazhakootam (Thiruvananthapuram), and won the inter-school trophy.

To quench my thirst about the 1978 World Cup, and what Bose recounted about their almost telepathic play, their mesmerising possession football, I pored over Sportsweek magazine in the school library. That read-up blooded me as a dyed-in-the-wool buff of the team that turned out in canary yellow jersey and blue shorts -- Brazil.

The flight of the canary

The chroniclers of football have marked 1894 as the year Charles Miller, a handlebar-moustachioed Briton, disembarked on the Brazilian shores. He became the first football evangelist in Brazil.

In 1919, by scoring the winner in a much-ballyhooed 1-0 victory over Uruguay, Arthur Friedenreich became the first Brazilian football superstar.

It took Brazil more than half-a-century to emerge as a footballing force to reckon with. In the 1950 World Cup, they lost 1-2 to archrival Uruguay at home (the Maracana Stadium) in the final. The defeat still festers as one of the sorest tragedies in Brazil.

Brazil became the numero uno force in world football by winning the 1958 World Cup hosted by Sweden. Pele, a 17-year-old spindly lad, stole the heart of the cognoscenti and the hoi polloi alike. A goal he scored in the final -- by flicking the ball over the head of a strapping Swedish defender, pirouetting around him, then intercepting the ball on low-volley to fire a curler into the net -- still remains unsurpassed in its sheer spectacle and skill.

In the next World Cup held in Chile, injury forced Pele to sit out. Garrincha -- bandy-legged, and with one leg shorter than the other (deformed from birth by polio) -- spearheaded Brazil, with Didi and Vava as support cast, to earn their second title. Eduardo Galeano wrote of Garrincha: 'In the entire history of football, no one made more people happy.'

The global consensus is that the Brazilian team of 1970 World Cup in Mexico -- starring Pele, Jairzinho, Rivelino, Tostao and Gerson -- as the best ever to grace the game. They drubbed Italy 4-1 to win the Jules Rimet Trophy for the third time.

The Brazilians elevated football to what has come to be known the world over as joga bonito, the beautiful game. And 1970 is often flagged by the football intelligentsia as the apotheosis of Brazil. As well as Pele.

While reading up on the 1978 World Cup, this idealistic, impressionable adolescent was rankled by the dubious decision of referee Clive Thomas to disallow a final-minute header by Zico off a corner, which denied his team Brazil victory. Though the rule says that a referee can stop a match only after a corner kick is completed, Thomas blew the whistle claiming that the clock had ticked past 45 minutes! (Yellow card to the referee?) Consequently, Brazil had to settle for a 1-1 draw with Sweden.

Argentina trumped Peru 6-0, and entered the final by edging past Brazil on goal difference. Rumours were rife that Argentina, which was then ruled by a military junta, had nobbled Peru to lose so badly. This controversy surrounding the Argentinian victory vexed me no end. My heart naturally bled for Brazil.

Although they did not win the Cup in Argentina, Brazil had unveiled a likely heir to Pele -- Zico. Fans called him the 'White Pele'.

I closely followed the fortunes of Brazil in the 1982 World Cup held in Spain. With a formidable line-up studded with Zico, Socrates, Falcao, Cerezzo, Junior, Serginho and Eder, Brazil was the team to beat. Like a mighty tidal wave, they swept aside the Soviet Union, Scotland, New Zealand and archrival Argentina. Everybody thought they had to just turn up, to beat Italy. But it was hitherto invisible Paolo Rossi's day. His hat trick humbled Brazil 3-2, a match FIFA officially sanctified as a classic game of all World Cups.

Some months before the 1986 World Cup, an Indian Air Force colleague and I triumphed in laying our hands on few video cassettes of 1982 World Cup matches featuring Brazil. The court craft of the Brazilians, their dribbling and passing to the samba rhythm, their flair to cleave through the opponent's defence with geometrical precision, were not only a marvel to behold but breathtaking too. What a kick that was; I felt the pulsation of blood in the body.

Besides, the speed, sublime artistry, guile and grace of Zico had me under a spell. I elevated him to the pedestal of the most skilful footballer in my esteem.

The Brazilian team for the 1986 World Cup captained by Edinho, had the phalanx of Zico, Socrates, Careca, Branco, Alemao, Junior, etc for others to contend with. Doordarshan telecast the matches live from Mexico, from the witching hour to dawn. My dream came true on June 1; I saw Brazil in action, live. At Guadalajara, they beat Spain through a second-half goal by Socrates. It made my day, at midnight!

The Brazilian juggernaut was stunningly upturned by the French team in the quarter-final. Besides Platini, France had the likes of Tigana, Giresse and Rochesteau -- all fine footballers in their own right. In the classic encounter, level at 1-1, Zico was called on to take the penalty kick. The French goalie Joel Bats guessed the direction rightly; Zico, who seldom bungled penalties, even when blindfolded (okay, pardon my exaggeration), muffed it.

France went on to defeat Brazil in the tie-breaking penalty shootout. Zico thus lost his last chance to win the Cup for Brazil. Ah, you can't win them all. Incidentally, that match saw three greats (Zico, Socrates and Platini) missing spot kicks.

Arthur Antunes Coimbra answered to the nickname Zico. He scored 66 goals in 88 internationals for Brazil. Though an under-achiever, the veritable tragic hero of World Cups, for his silken skills, Zico remains my all-time great footballer. To me, the Brazilian team of 1982 is arguably the greatest team never to win the World Cup, ahead of the Ferenc Puskas-led Hungarian team of 1954 and the Johan Cruyff-led Dutch team of 1974.

Indian football's high noon remains the fourth place finish in the 1956 Melbourne Olympics, in which Neville D'Souza scored a hat trick against Australia in the quarter-final. (For the record, he is the only Asian so far to score a hat trick in the Olympics.) India won the Asian Games gold medal twice -- in 1951 at Delhi and 1962 at Jakarta.

India currently ranks 133rd in the list put out by FIFA, the world football body. The downhill journey since the mid-60s has stagnated to languish barely few slots above rock-bottom.

Small wonder then that we continue to ask the same question every four years: Will we ever see an Indian team at the World Cup in our lifetime? Will India ever produce a footballer whose name will be taken in the same breath as, say, Eusebio, Lev Yashin, Bobby Charlton, Beckenbauer, Zidane, Romario? In contrast, nations like Honduras and North Korea are rubbing shoulders with giants Spain and Brazil in South Africa. The second-most populous country has been reduced to a mere spectator.

Puzzlingly, football remains the most watched spectator sport at the domestic level and grassroots, and the number of football fans is growing by the day. Yet, Indian football is in the doldrums.

What ails Indian football? Experts have dissected it: slothful and unprofessional administration, ramshackle infrastructure, dearth of quality coaches, arbitrary selection procedures, poor marketing, not nurturing age-group teams; and the national team forever remains hobbled by inadequate preparation, insufficient match-practice and international exposure. Though everybody is au fait with the prescribed remedies, the All India Football Federation refuses to wake up from its deep slumber to administer the medicine.

The Nehru Cup international football tournament and the I-League (and its ancestor National Football League) -- two endeavours to infuse fillip to Indian football -- never set the Hooghly on fire. Since the AIFF is run by politicos Priya Ranjan Dasmunsi and Praful Patel, they perhaps think that like politics, AIFF should remain a wellhead of patronage. Reforms are anathema to politicians. Even half-hearted attempts to reform the termite-ravaged body have at best been cosmetic.
Prime Minister Manmohan Singh had taken up the issue of getting a football coach from Brazil with President Lula da Silva during his visit to Brazil in 2006. Apparently, four years are insufficient for our sports bureaucracy to hunt for a Brazilian football coach!

One can only hope that the ongoing World Cup in South Africa will inspire teens and youngsters to take to football in a big way, and that the passion will kick off the renaissance of Indian football, AIFF notwithstanding.

In 1982 and 1986, Brazil and France were the two best teams but neither won the Cup! The team with the top billing need not romp home; this glorious uncertainty adds to the allure of the Cup. As for the ongoing World Cup, the 29 matches so far have produced just 57 goals, and a solitary humdinger. All those who love the joga bonito, never mind the drought, enjoy the rest of the World Cup. 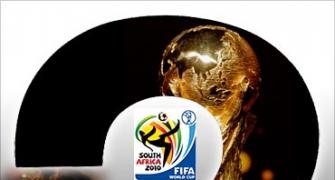 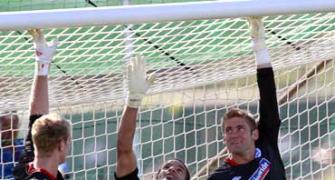 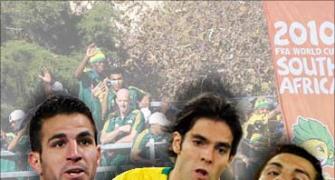 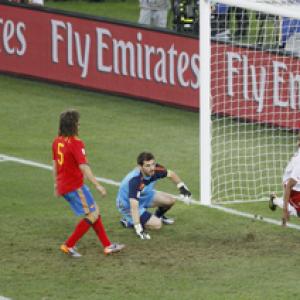 Upsets and the World Cup have become synonymous 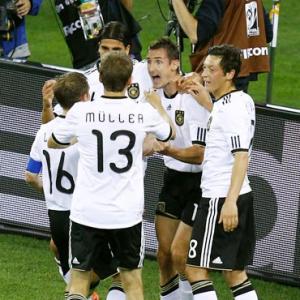