Chidi Edeh scored a spectacular goal in the last minute to guide Mahindra United to a 2-1 victory over JCT and into the final of 121st Osians Durand Cup football tournament in New Delhi on Thursday.

The Nigerian import, who came close to scoring on a number of occasions, struck a long range right-footer seconds before the final whistle to the huge disappointment of the millmen who were leading 1-0 till the 72nd minute of the semi-final match at the floodlit Ambedkar Stadium.

JCT took the lead a minute before half-time through Balwant Singh. Eduardo Escobar's freekick was palmed away for a corner by Mahindra goalkeeper Subhasish Roy Chowdhury, who then failed to deal with the Brazilian's resultant corner.

The ball was headed back into the box by Anwar and Balwant Singh's spectacular bicycle kick gave the goalkeeper no chance.

Mahindra United came close within seconds to get back on level terms but Mohammad Rafi failed to connect Chidi's pass.

Four minutes after resumption, Chidi saw his right-footer come off the woodwork. From then on, it was one-way traffic as Mahindra United came close on a couple of occasions.

First Chidi's header went over and then Paresh Shivalkar failed to tap in the Nigerian's cross. They earned four corners in the space of 10 minutes and found the equaliser through one of them.

Douhou Pierre's corner was headed by Justine Stephen and Paresh got plenty of time to turn and finish it off with his right foot in the 72nd minute.

But the manner in which JCT started, the outcome would have come in for a shock them. Within a minute after kick-off, the Phagwara-based team showed its intent when Escobar's corner was headed by Anwar.

The ball came off goalkeeper Subhasish and it looked as if it had trickled over the goalline before he retrieved it, but there was hardly any appeal and referee Rowan of the Services too failed to notice.

With two teams almost evenly matched, it was a battle of nerves in the initial phase before Mahindra United tried to force the pace with some nice build-ups, but couldn't get past Anwar and Julius Akpele guarding JCT's fort.

For Mahindra United, it didn't help that Sushil Singh often lost track of where he was supposed to be.

JCT relied on the counter and Escobar's tricks to unlock Mahindra United's defence. The Mumbai side was also allowing too much space in the penetrative zone.

Mahindra coach Derrick Pereira brought on Izumi Arata in place of Sukhwinder Singh and introduced Paresh for an ineffective Sushil in a bid to infuse some spark in the middle. The move worked with Paresh's pace creating a lot of trouble in rival defence.

"We played well throughout but missed many chances. Paresh's introduction changed the whole complexion of the game," said Pereira. 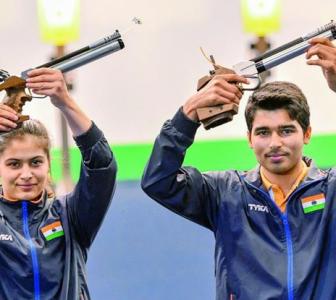