India's hockey coach Michael Nobbs is nonplussed as to why the senior players are not adhering to the game plan as he struggles to prepare the side for Friday's tough match against reigning Olympic champions Germany.

After suffering two successive defeats, Nobbs had a one-on-one session separately with his players and asked why the game plan was consigned to the dustbin by some players.

He said the attitude of some players is disrupting India's game, and he cannot figure out why these players are not able to follow the strategy that has repeatedly been explained to them and often practiced in the field. 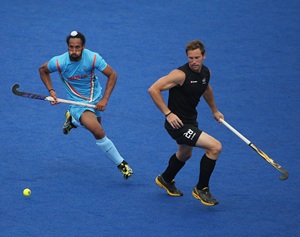 "When you play top teams you have to adapt and see which pattern works, but here we have a situation where some players are just going on to the pitch and doing their own thing," said Nobbs.

"The game plan gets chucked into the bin. The boys have for months been practicing the way we need to play and adapt to situations, but coming here they are trying to change everything on the floor," said Nobbs.

After two dismal performances that saw India lose 2-3 to the Netherlands and 1-3 to New Zealand, clear instructions have gone out to the players to 'please follow the game plan' to help the team's cause.

"The boys say that have understood what is required of them. In practice, they execute everything properly. But going into the game they seem to put all that out of their mind," he said.

Nobbs said in both the matches, the Indian team came into the contest only in the second session, but the failure to capitalise on the openings they created yesterday against New Zealand has left them with zero point from two matches.

Nobbs has told the players that a similar show against Germany could be disastrous.

"We're going into a game against the second highest-ranked team in the world, and we do not want to get exposed. The players need to stay focused on the plan for the game," he said.

"I have watched the New Zealand game five times. We got into the circle 43 times and we could not force any penalty-corners between the second and 57th minutes. Now that says a lot about the way we played," said the coach, who seemed upset with some of the strikers who seemed 'a complete waste of space'.

"These boys are playing international hockey and fully understand that when we are not getting anything from crossing the ball, then look for penalty-corners," said Nobbs.

India are back in the Olympic arena after eight years, having failed to qualify for the 2008 Games in Beijing.

"The occasion should get the team going, but they got overawed when we went into the match against the Netherlands. We're making no bones. We are not good enough yet to get a medal, but at least we can play well and to our strengths," Nobbs said.

"We've got the basics and we're getting into the circle, but the finishing is poor and we continue to conceding soft goals."

India and Belgium are the only teams not to have earned a point after two outings in Pool B of the men's hockey competition.

The Netherlands and Germany lead the table with six points each from two successive wins, while South Korea and New Zealand are both on three points after one victory and a loss.