India's Olympics hockey campaign ended on an ignominious all-loss note -- their worst at the mega event -- after being drubbed 3-0 by lowly Belgium in their last pool match on Tuesday.

The Belgians made the best of a frail defence and erratic forward line to consign the eight-time Olympic champions to the bottom of Group B.

Following their fifth defeat on the trot, India finished without a point from the tournament.

The bottom finish in Pool B was a foregone conclusion irrespective of the result of the match as all other teams had earned four or more points from the previous games, but Tuesday's defeat meant this is the first time India failed to register even a point.

India will now meet South Africa in the play-off for 11th and 12th positions, slumping below their lowest Olympic finish of eighth at Atlanta in 1996. 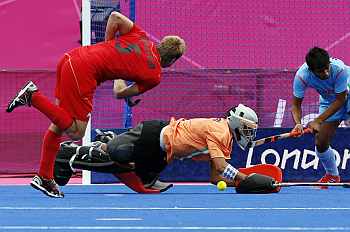 India did not qualify for the 2008 Olympics in Beijing.

South Africa, who lost 3-6 to Argentina in another match on Tuesday, finished their five matches in Pool A with one point, leaving India as the only team without anything from the competition.

India's forward line was erratic again and muffed chances galore. They repeatedly broke into the Belgian circle, but failed to breach the defence. The fact that they earned just two penalty-corners in the whole match explains the whole story.

Belgium, on the other hand, capitalised on the openings the Indian defence allowed their forwards,

Initially, play was confined to the midfield before Belgium earned their first penalty-corner in the 12th minute. Fortunately, it posed no danger, as the rising shot hit an onrushing Indian defender.

Two minutes later, India broke into the Belgium circle, but were thwarted by crowding out tactics and could not have a shy at goal.

Belgium went ahead in the 15th minute as the Indian defence's poor positioning left Jerome Dekeyser unmarked at the top of the circle and gave him enough time to receive a well-measured diagonal ball. He took one step into the circle and beat onrushing goalkeeper Bharat Chetri with a rasping shot that went high into the goal.

The Indian defence appeared shaky as Belgium again went into the Indian circle two minutes later, but the shot was directed wide, much to the relief of the defenders.

India earned their first penalty-corner in the 21st minute, but ace drag-flicker Sandeep Singh did not take the shot. Instead, an indirect attempt was made as Sardar Singh pushed the ball towards Gurbaz Singh, whose deflection went into the sideboard.

India came back into the match midway in the first session, but the Belgians held on. Tushar Khandker had two shots at goal from the top of the circle in the 22nd minute, when the ball rebounded off the post on the first occasion and then Belgian goalkeeper Vincent Vanasch padded the second attempt.

Right-winger S V Sunil broke into the circle a minute later, but shot straight into the goalkeeper.

Soon after, Sunil had only the goalkeeper to beat after receiving a ball from Dharamvir Singh, but the shot was easily padded away.

Belgium's second penalty-corner was blocked by an onrushing defender before India launched a series of attacks into the scoring zone.

India's efforts for a goal saw them launch five raids into the rival circle in as many minutes before the interval, but the forwards seemed devoid of ideas after getting there.

Instead of trying to secure penalty-corners, they kept pushing the ball into a crowd of defenders that had fallen back to deny space inside the scoring zone.

Shivendra Singh, who was lacklustre again, had an opportunity to score just a minute before half-time. The ball bounced when his flick was blocked by the goalkeeper and he tried a wild swipe at the ball instead of controlling it.

India continued their exhibition of missed opportunities in the second session and even saw the Belgian goalkeeper using his raised stick to deflect Sandeep's rising penalty-corner drag-flick in the 39th minute.

occard scored the second Belgian goal against the run of play on a breakaway move that saw the ball hitting a defender's foot. The umpire raised his fingers to award a penalty-corner, but did not blow the whistle to give advantage to the Belgian strikers.

Boccard beat the Indian goalkeeper with a reverse hit even as the defenders were looking at the umpire.

Going all out for a goal in the last 10 minutes, the Indians thrice opened up the Belgian defence but there was no one to execute the final deflection, nor did they try to earn a penalty-corner.

Just before the final hooter, Boon beat goalkeeper Chetri with a firm reverse hit that sounded the board.

Francois Gautier: The spirit of Natchiketa