India continued their goal-scoring spree and predictably walloped minnows Italy 8-1 in a one-sided match of the men's hockey Olympic Qualification tournament, in New Delhi, on Sunday.

After their 15-1 drubbing of Singapore last night, India's match against Italy was also expected to be a high-scoring affair and it turned out to be one as the home team toyed with the Italian defence in the opening half to pump in as many as six goals as against the visitor's one. 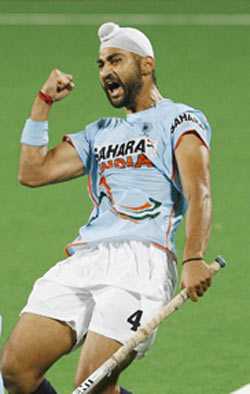 However, the second half turned out to be a dampener for the Indians as they could manage just two goals even though they penetrated the Italian defence continuously.

The most heartening thing that came out for India from Sunday's match was their penalty corner conversion rate.

Expectedly, the 41st ranked Italy, who came as a replacement for Egypt in the event, were a mismatch for the eight-time Olympic champions and World ranked 10th, India.

It took India just four minutes to take the lead when Sandeep scored from the home team's first penalty corner with a powerful low drag-flick to the right of Italian goalkeeper Fabrizio Federici.

The Indians earned another penalty corner soon and this time Raghunath found the back of the opposition net with a fierce flick.

Five minutes later Italy pulled one back against the run of play from their first penalty corner. Allessandro Nanni scored from a lose ball after William Cottam missed out on the drag-flick.

Sandeep, however, converted two more penalty corners with in a span of two minutes to make the scoreline 4-1 in favour of the Indians.

After the initial four strikes from penalty corners, India scored two field excellent goals to go into the breather with a comfortable 6-1 lead.

An unmarked Sunil scored the first of the field goals in the opening period after receiving a well measured pass from the right from Tushar Khandker.

Two minutes later, Chandi also registered his name in the scoresheet when he slapped home the ball from the top of the circle.

The Indians started with the same intensity in the second half and took just three minutes to sound the board when Sunil deflected home Sandeep's tantalizing pass down the middle.

Shivendra completed the tally for India when he deflected a Chandi into the Italian goal.

India threatened to score more goals and on two occasions came close but Shivendra and Sunil lacked in finishing.

With this win, India are currently at the top of men's pool with six points from two outings. Even though France has same points as India, they occupy a close second position because of their inferior goal difference.

India will next play France on Tuesday after a rest day on Monday, while the Italians will be up against Poland. 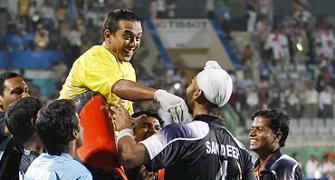 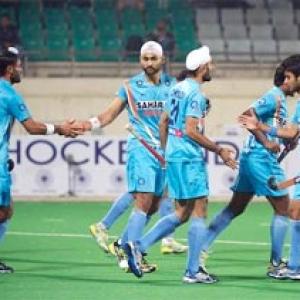