It was a tremendous finish for Liuzzi after starting as low as 17th on the grid. Before this, a seventh place finish at the Australian GP was the best result for the Italian.

However, Adrian Sutil returned empty handed after failing to finish for the second consecutive time, following an accident.

At the Japanese Grand Prix, early this month, both Sutil and Liuzzi had retired mid-way.

The DNF result pushed Sutil to 11th in the drivers championship as Williams' Rubens Barrichello replaced him by finishing seventh. Both are tied at 47 points.

Liuzzi has moved up to the 13th spot with 21 points.

The 55-lap race started under the safety car and was suspended for around 50 minutes after three laps.

It was a disastrous race for Red Bull's Sebastian Vettel and Mark Webber, who crashed out along with seven other drivers, after starting one and two respectively on the grid.

Sutil was the first non-finisher of the nine as he spun on Lap 29 and then ran wide in Turn One and lost a place to Alguersuari. He then hit Kamui Kobayashi and brought about his own retirement on the 47th lap with damaged front suspension.

The Yeongam track was drenched throughout the morning and after several delays the inaugural race was started under the safety car as visibility and track conditions were deemed too poor.

Liuzzi benefitted from the final safety car to pit for intermediate tyres.

"What a crazy race today, a bit like Australia back at the start of the year, and it was very fun to be out there. It was the right decision to delay the start as there was so much water on the track," Liuzzi said after the race.

"Then at the end it was like a night race without any lights and the steering wheel lights were so bright it was almost dazzling! Even though there was so little grip I was able to get into a good rhythm and get a great result for the team," he added.

Sutil was disappointed with the result.

"I was just struggling with my brakes all the time. I had so much brake force that I always locked up and it was hard to drive consistently. There were a lot of times I was off the circuit, or locked up, and then got past a driver and went off the road," he said.

"In the end I tried to overtake Kobayashi but lost the car on a patch that was a bit more wet than I expected and went into the side of him. I'm not happy with my performance, it was not a good race for me personally, but I'm pleased that the team did well with Tonio and the sixth position," he added.

"I don't think I've ever seen a race quite like this one. We said it would be an interesting one and the constantly changing conditions threw up all sorts of challenges. It was a great performance by Tonio today as he kept his head and raced hard until the finish.

"It can't have been easy in the failing light and on a damp track on worn tyres but he did brilliantly to secure those crucial points. Adrian had a much more difficult race.

He feels he didn't do himself justice, but I'm sure he'll come back stronger in Brazil and Abu Dhabi," he said. 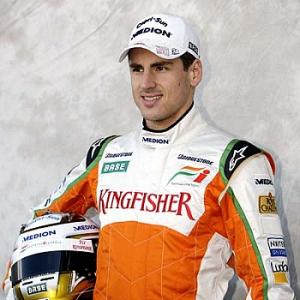