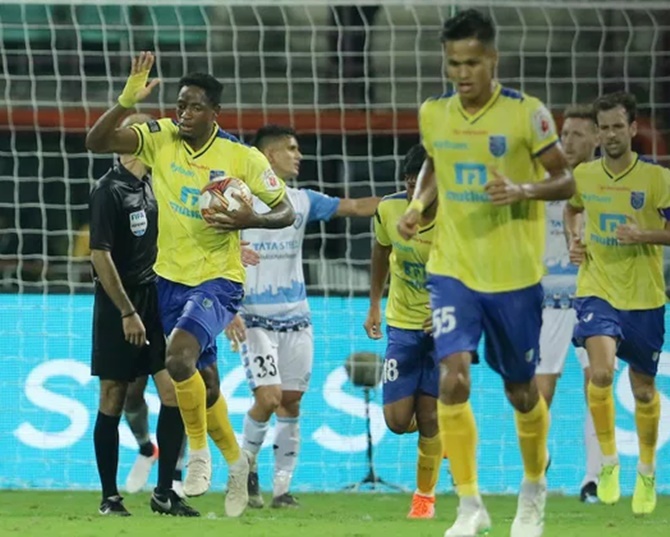 IMAGE: Raphael Messi Bouli stepped up and converted from the spot to complete his brace and a late comeback for Kerala. Photograph: ISL Media

Raphael Messi Bouli struck twice in the last 15 minutes to eke out a 2-2 draw for Kerala Blasters against Jamshedpur in an Indian Super League clash, in Kochi, on Friday.

Kerala had the better chances to score but it was a Piti (38') penalty that broke the deadlock. CK Vineeth (71') added the visitor's second before Raphael Messi Bouli scored a brace (75', 87') to pull his team level.

With the spoils being shared, Jamshedpur are third with 13 points from eight matches while Kerala sit seventh with seven points.

Mario Arques, who was deemed fit to start after a lengthy layoff, nearly got his team off to a splendid start. Seityasen Singh nicked the ball on the right flank and cut inside to deliver a threatening cross that was headed straight at the goalkeeper by the Spanish midfielder at the far post.

The visitors were careless in possession early in the game, with Jeakson stealing the ball off Aitor Monroy to set Raphael Messi Bouli free, but the Cameroonian striker couldn't keep his shot on target.

With the game nearing half-time, the referee penalised Vlatko Drobarov's manhandling of Tiri inside the box from a corner conceded by a Seityasen backpass. Piti calmly slotted home from 12 yards to put Jamshedpur ahead.

Kerala spurned a well-worked chance to equalise after the restart. Seityasen drilled a low cross into the box from the right flank for Arques who failed to connect at the near post. The loose ball fell perfectly for Sergio Cidoncha whose powerful strike from inside the box flew wide.

Sahal Abdul Samad's introduction in place of Cidoncha in the second half gave the hosts a much-needed spark in midfield.

In the 66th minute, the Kerala-born midfielder danced his way past the Jamshedpur defence before getting a shot away. Tiri was well-positioned to block the strike and keep his team in the lead.

Five minutes later, on his return to Kochi, substitute CK Vineeth struck Jamshedpur's second. The forward played a one-two with Farukh Chaudhary before dribbling into the box and finding the gap between Rehenesh and the near post.

Kerala Blasters pressed high up the field as an emergency response and worked the ball well to find a goal in the 75th minute. Sahal produced a delightful chip from inside the box for Messi who nodded in at the far post to provide a ray of hope for his team.

With three minutes left for the end of regulation time, Kerala found an equaliser. Seityasen Singh dribbled into the box and was brought down by Robin Gurung. Messi stepped up and converted from the spot to complete his brace and a late comeback for Kerala. 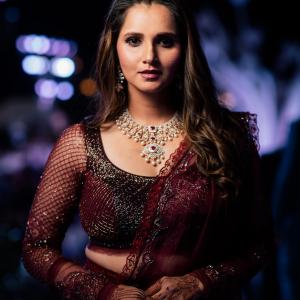 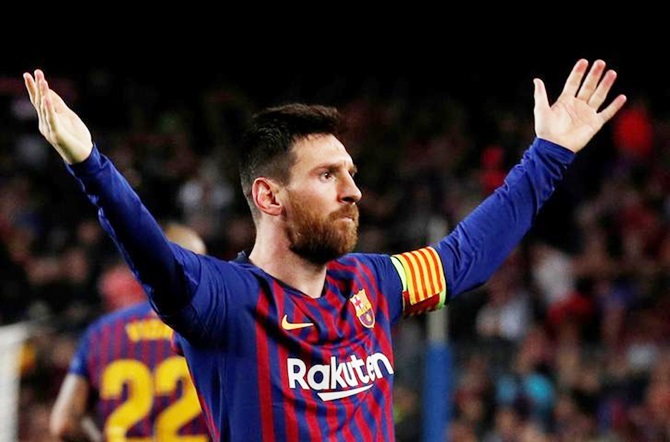