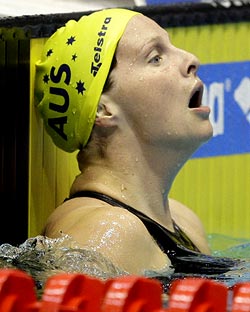 Star swimmer Stephanie Rice's pullout due to a shoulder injury and Ryan Napoleon's doping ban had weakened the squad slightly but Nugent said it is still strong enough to sweep the medals in Delhi.

"Australia has a fantastic tradition at the Commonwealth Games and with the swim team getting the chance to compete at the start of the Games, we know we have a responsibility to start well," said Nugent.

Apart from the veteran Jones, who is a seven-time Commonwealth Games gold medallist, former world record holder Eamon Sullivan is also a part of the team.

Former world champion Huegill, who gave up swimming after the Athens Olympics before making a comeback in 2008, will be aiming to add some more medals in his third Commonwealth Games after winning two golds in 1998 and three in 2002.

The 31-year-old is a former world record holder in the 50 metres butterfly.

"This is a strong team and a team that is looking forward to competing well in Delhi. The Pan Pacifics last week were a great hit-out for the majority of the team, and the athletes and coaches now know exactly what they need to work on and fine-tune, to be at their best come October 4 when we start the meet in Delhi," he said.