Veterans Leander Paes and Mahesh Bhupathi and debutants Rohan Bopanna and Aisam-ul-haq Qureshi were, on Tuesday, placed in different groups for the season-ending ATP World Tour finals, starting, in London, on Sunday.

Paes and Bhupathi, who probably will play with different partners next season, have been placed in Group A along with three-time winners Mike and Bob Bryan of the United States.

Robert Lindstedt and Horia Tecau and Jurgen Melzer and Philipp Petzschner are the other two pairs in Group A.

Bopanna and Qureshi, who have qualified for the elite event for the first time, will fight it out with Michael Llodra and Nenad Zimonjic and two other teams in Group B.

Daniel Nestor and Max Mirnyi and Mariusz Fyrstenberg and Marcin Matkowski are the other two pairs in Group B.

The draw was held at BBC Radio 5 studios in London.

The tournament will be played in round robin format with the top-two pairs in each group qualifying for the semi-finals.

Bhupathi and Max Mairnyi had ended runners-up in 2010, losing the final to Nestor and Zimonjic.

Canadian Nestor and Serbian Zimonjic have paired with different partners this year but find themselves in the same group. 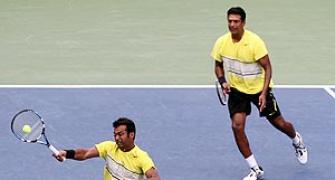 Paes-Bhupathi bow out of China Open