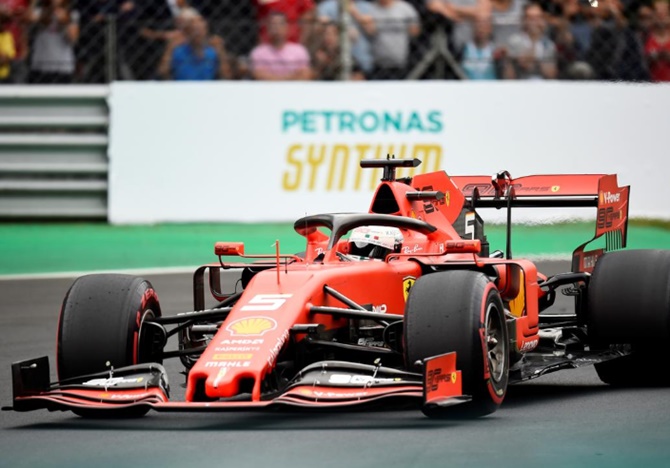 Charles Leclerc put Ferrari on pole position for their home Italian Formula One Grand Prix on Saturday in a qualifying session that ended in farce and with drivers under investigation.

The last lap saw nine drivers cruising around, weaving and braking but with nobody willing to take the lead, and only McLaren’s Carlos Sainz making it to the line in time for a final fast lap.

“The problem was everyone wants a slipstream and nobody wants to go first.... and then everyone looks like idiots.”

Stewards said in a note on the timing screens that the last lap was under investigation. 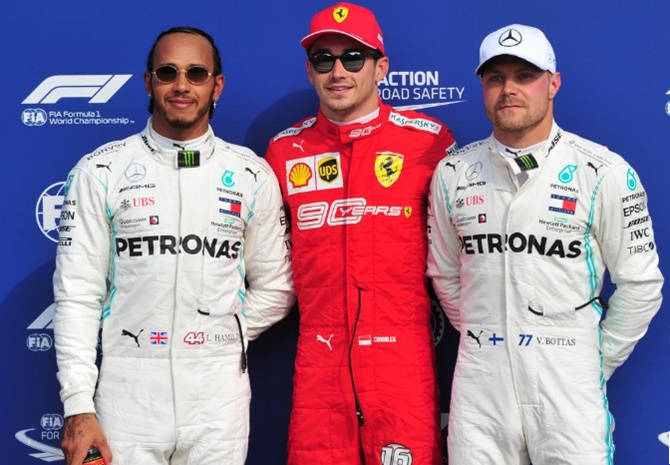 Alfa Romeo’s Kimi Raikkonen, the other driver through to the final phase of qualifying and last year’s pole sitter for Ferrari, had earlier crashed at Parabolica — halting the session for 11 minutes.

When the session re-started, with Leclerc on provisional pole after setting the pace before the red flag, there were minutes of inaction.

That was followed by a sudden flurry, with cars streaming out of the pitlane and jostling for position in a closely-grouped pack.

The irony of the slowest of qualifying laps at the fastest of tracks, a circuit where slipstreaming can be a huge benefit to lap time, was not lost on Hamilton who has taken more poles than any driver in history.

“It’s interesting. Get pole position on the first run and then just time everyone out,” said Hamilton, seemingly pointing the finger of blame at Ferrari, whose army of fans were celebrating anyway.

The pole was Leclerc’s fourth of the season and second in a row. The Monegasque will be chasing his second successive victory on Sunday after winning for the first time in Belgium last weekend.

“I’m happy with pole but it’s a shame at the end it was a big mess and I hoped our last lap was enough,” said the youngster.

The Hobart-born 19-year-old hit a 'sausage' kerb at Parabolica and his Campos Racing car was flung high into the air before flipping and landing upside down on the tyre wall, coming to rest against the wire fence.

Peroni, who walked to the medical vehicle unaided, gave an update on Instagram.

"Currently recovering in hospital with a broken vertebra. Not sure the recovery time but hope to be back in the car as soon as possible," he said.

No other driver was involved, with the race finishing behind the safety car, but the shocking incident caused further concern in a sport still reeling from last weekend's events in Spa-Francorchamps.

Formula One's final practice session before qualifying was delayed while repairs were made to the barriers and the offending kerb was removed.

Renault Formula One driver Daniel Ricciardo, who had been watching his compatriot's race, said another lesson had been learned.

"You would never think that little kerb there could have such an impact," he said. "Unfortunately sometimes something needs to happen until you realise the consequence of it."

"I never, ever looked at that kerb thinking that's a danger, that's a threat."

"Crazy. It's another lesson for us. Even if it seems like nothing, you get a little bit of turbulence under the car and it can take off...now we just know that we can't have these (kerbs) on any high speed corners."

Peroni's crash also reinforced the importance of the mandatory 'halo' head protection system, protecting the Australian from the upside down impact.

Safety in the motorsport pyramid below Formula One is under increased scrutiny after last Saturday's tragedy.

Formula Three qualifying had to be halted on Friday for safety reasons after a queue of cars lined up on the back straight preparing to start their timed runs while others approached at speed.

Hubert, 22, died after his car was hit at speed by Juan Manuel Correa's after the French driver had gone off into the barriers at Spa's fast Raidillon corner.

American-Ecuadorian Correa is on life support and in an induced coma in a London hospital after being moved from Belgium.

Hubert was the first driver fatality at a Formula One race weekend since Ayrton Senna and Roland Ratzenberger were killed at Imola in 1994.

© Copyright 2020 Reuters Limited. All rights reserved. Republication or redistribution of Reuters content, including by framing or similar means, is expressly prohibited without the prior written consent of Reuters. Reuters shall not be liable for any errors or delays in the content, or for any actions taken in reliance thereon.
Related News: Ferrari, Charles Leclerc, Lewis Hamilton, Alex Peroni, Anthoine Hubert
SHARE THIS STORYCOMMENT
Print this article