Lionel Messi’s double strike helped Barcelona scrape a 3-2 victory over Real Sociedad on Saturday to keep the pressure on La Liga leaders Real Madrid, who needed a brace from Isco to beat Sporting Gijon by the same scoreline.

A much-changed Madrid side snatched victory at El Molinon thanks to Isco's two goals, which included a 90th-minute winner, to stretch their lead over Barcelona before the Catalans closed the gap back down to three points at the Nou Camp.

Messi scored twice and set up a third for Paco Alcacer as Barcelona saw off their Basque opponents, who pressed them until the end of a nervy encounter.

The win, however, kept the Catalans within touching distance of Los Blancos, having played one match more, ahead of next Sunday’s Clasico.

Barcelona coach Luis Enrique was relieved to put a difficult week behind him, after last weekend's 2-0 loss to Malaga and Tuesday's bruising 3-0 reverse against Juventus in the Champions League. 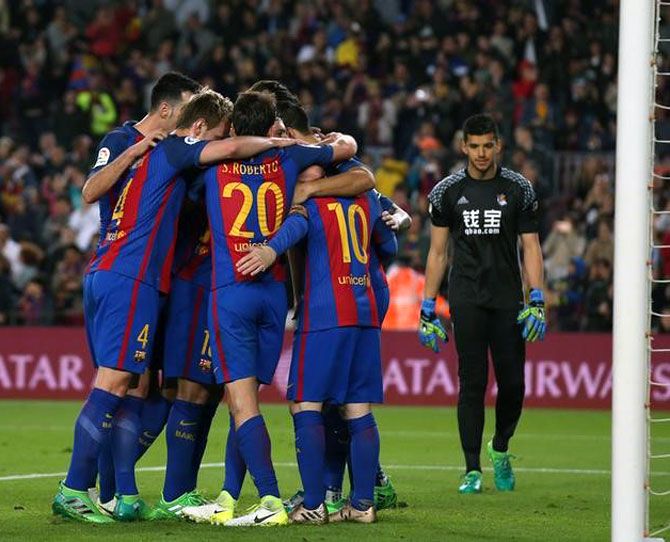 Despite their recent jitters, he is confident that his side can do well in the reverse leg against the Italians and against Madrid in next weekend's crucial title showdown if they perform to their very best.

“We have to be marvellous and perfect,” he said. “The players need confidence to be at their best and that’s what I’m trying to do as the coach.

“It was a special week because of what happened before (defeats by Malaga and Juventus). We won a game against a difficult opponent. I’m more than happy with the performance. We deserved to win even though it was tricky.”

Messi put Barcelona ahead with a low drive and doubled the lead with a tap-in after Luis Suarez’s shot was saved, but Sociedad hit back when Inigo Martinez’s lashed effort bounced off Samuel Umtiti into the Barcelona net.

Alcacer extended the Catalans’ advantage before Xabi Prieto reduced the deficit to 3-2 just before halftime, while the second half stayed goalless despite intense pressure from the visitors.

Madrid endured a nervous game too, which was eventually settled by Isco at the death. Sporting opened the scoring in the 14th minute when Mikel Vesga scooped a pass over Madrid's defence which Duje Cop slammed home, and then Isco equalised three minutes later with a brilliant individual goal.

Vesga looped a header over Kiko Casilla to put the hosts back in front after halftime, but Alvaro Morata equalised with a headed goal of his own, before Isco's late winner.

The Spain international said that fighting until the very end and snatching late victories are part of the club's fabric.

"This is the spirit of Madrid, we showed it and we did it," he said. "I had the luck of being the decisive one and I'm here to help my team mates."

Atletico Madrid missed two late penalties but still thrashed bottom of the table Osasuna 3-0 at home with a brace from Yannick Carrasco to stay third in the table.

In the battle to avoid the drop, Deportivo La Coruna beat Malaga 2-0 to move nine points clear of the relegation zone, with Sporting Gijon still 18th, on 22 points.

© Copyright 2021 Reuters Limited. All rights reserved. Republication or redistribution of Reuters content, including by framing or similar means, is expressly prohibited without the prior written consent of Reuters. Reuters shall not be liable for any errors or delays in the content, or for any actions taken in reliance thereon.
Related News: Isco of Real Madrid, Real Sporting de Gijon, Isco, Mikel Vesga, La Liga
COMMENT
Print this article