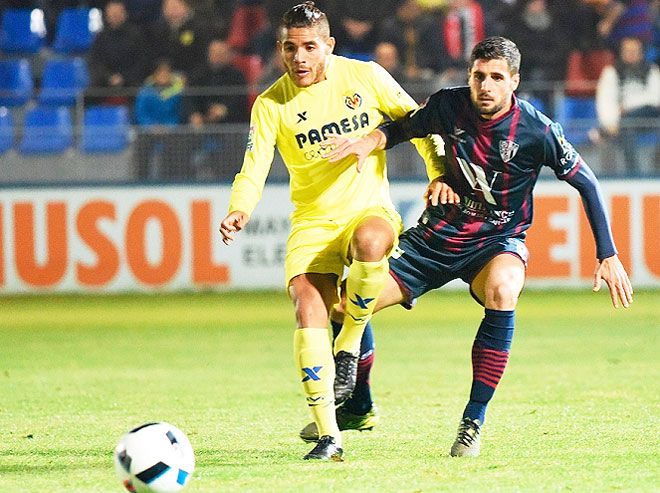 IMAGE: A Villareal and a Huesca player vie for possession during their King's Cup Copa Del Rey match on Thursday. Photograph: Villareal CF/Twitter

Following a bright start to the season it was another disappointing display by Villarreal, who have one win from seven games in La Liga, before the return at El Madrigal in two weeks.

Huesca's Juan Antonio Anquela was able to celebrate victory over Villarreal in his first match back in charge of a team who lie one place above the relegation zone in Segunda A.

He has plenty of experience of giant killings having coached lower league Alcorcon to a cup win over Real Madrid in 2009.

Luis Fernandez fired Huesca ahead after three minutes when the Villarreal defence failed to clear a free-kick and the home side controlled the first half.

The game was wide open and Cedric Bakambu brought Villarreal level at 2-2 just before the hour after a backheel by Manuel Trigueros but in the 75th minute Machis restored the home side’s lead from the right of the area.

In added time Huesca's Christian Fernandez was given a straight red card for a two-footed challenge on Nahuel.

“It was a poor result but we need to keep going. It was a difficult game as they played good football,” Villarreal defender Musacchio told reporters.

“We now need to focus on our next league games and then the return game in the cup.”

Malaga also suffered a surprise 2-1 loss at lower league Mirandes who scored through Alex Garcia and Lago Junior either side of a Roque Santa Cruz goal in reply.

Athletic Bilbao, though, had a comfortable 2-0 win over Linense with goals from Kike Sola and Aymeric Laporte.

Las Palmas have the edge in their top flight tie against Real Sociedad with Felix Asdrubal and Hernan Santana on target following Bruma's opener for a deserved 2-1 home victory.

Barcelona are through to the last 16 after a 6-1 thrashing of Villanovense on Wednesday with the tie brought forward due to the Catalan side´s involvement in the Club World Cup this month.

Real Madrid won their first leg tie at Cadiz 3-1 but their future in the competition remains in doubt after they fielded the ineligible Denis Cheryshev.

© Copyright 2020 Reuters Limited. All rights reserved. Republication or redistribution of Reuters content, including by framing or similar means, is expressly prohibited without the prior written consent of Reuters. Reuters shall not be liable for any errors or delays in the content, or for any actions taken in reliance thereon.
Related News: Villarreal, Villareal, Huesca, Mateo Musacchio, Darwin Machis
SHARE THIS STORYCOMMENT
Print this article