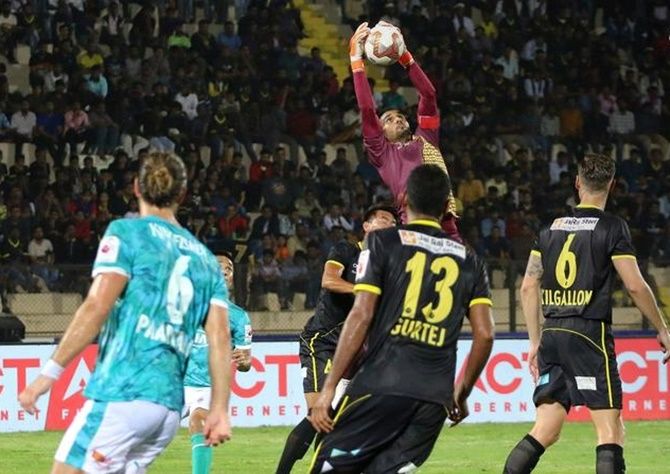 IMAGE: Robin Singh scored against his former side at the death to help the home team pick an important point. Photograph: ISL Media

A second minute goal from Sunil Chhetri looked enough for Bengaluru to pick three points before Robin scored against his former side at the death to help the home team pick an important point.

Laldanmawia Ralte and Sahil Panwar were handed a start by Hyderabad coach Phil Brown as he made a couple of changes to their line-up from the defeat to Chennaiyin FC. Bengaluru FC coach Carles Cuadrat named an unchanged starting eleven from their 1-0 win over Kerala Blasters.

In less than two minutes, the visitors took the lead through Chhetri. Kamaljit Singh's poor clearance found Ralte whose pass went straight into the path of Chhetri who made no mistake in slotting the ball home.

The defending champions saw more of the ball and continued to create openings as Hyderabad struggled to close down their opponents.

There was a penalty shout when Harmanjot Khabra's cross from inside the box was allegedly handled by Gurtej Singh but the referee chose not to pay heed to it.

After the half hour mark, Bengaluru could have doubled their lead from a corner. Dimas Delgado's corner found Albert Serran but the Spanish centre-back could not sort his feet out inside the box.

After the break, Hyderabad had a chance from a set-piece but Marcelinho's attempt sailed over the bar.

The home side were reduced to 10 men with Sahil Panwar bringing down Udanta Singh in the 56th minute. This was after Udanta was through on goal off a brilliant run by Ashique Kuruniyan who evaded past a couple of defenders.

From the ensuing free-kick, Chhetri tried to sneak one under the wall but the ball fizzled out for Augusto inside the box. His attempt was just about kept out by Kamaljit, much to the relief of Phil Brown.

Marcelinho was booked for a dangerous lunge on Raphael soon after but was lucky to get away with just a yellow card.

In the 67th minute, Kamaljit came to Hyderabad's rescue once again as he punched out Udanta's cross with Kuruniyan lurking at the near post. He followed it up with another save to keep Kuruniyan's attempt out after Chhetri did ever so well to find him inside the box.

Augusto, Chhetri and Udanta combined in the final third but neither of the trio could apply the finishing touch.

Brown threw Robin Singh into the mix in search for an equaliser and the former Bengaluru striker did not disappoint. Marko Stankovic picked a pass for substitute Ashish Rai who pulled it back from the right for Robin to place it home. 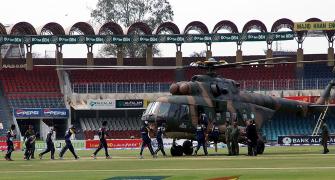 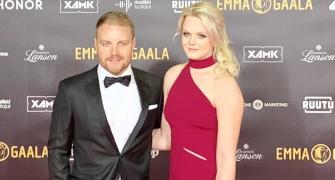 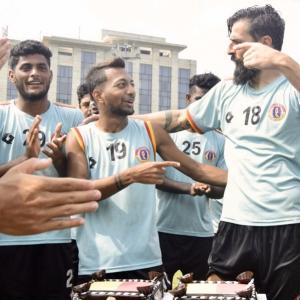 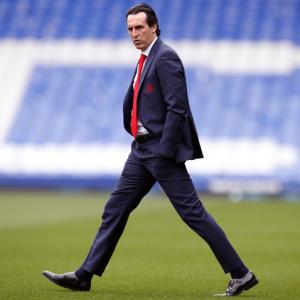