News
Business
Movies
Sports
Cricket
Get Ahead
Money Tips
Shopping
Sign in  |  Create a Rediffmail account
Rediff.com  » Sports » For me tennis is not so important, says Kyrgios

Amid the mental fight was Nick Kyrgios's usual array of the stupendous and stupid - under-arm serves, a record-breaking 145mph second serve, deft slices and, in the final tiebreak, shocking errors. IMAGE: Nick Kyrgios was at times furious, funny, abusive, pumped-up, complimentary of his opponent and, after the match, seemingly not quite sure just how to feel about his performance. Photograph: Clive Brunskill/Getty Images

Timothy Gallwey's million-selling "Inner Game of Tennis" was published 21 years before Nick Kyrgios was born but the author must be sorely tempted to knock out yet another edition with a special chapter devoted to the maverick Australian.

Kyrgios lost a superb four-setter against Rafael Nadal on Wimbledon's Centre Court on Thursday, during which he displayed just about every aspect of his unique approach to the sport.

He was at times furious, funny, abusive, pumped-up, complimentary of his opponent and, after the match, seemingly not quite sure just how to feel about his performance.

Amid the mental fight was his usual array of the stupendous and stupid - under-arm serves, a record-breaking 145mph second serve, deft slices and, in the final tiebreak, shocking errors.

"I know what I'm capable of - it just depends," he told reporters. "I'm a great tennis player, but I don't do the other stuff. I'm not the most professional guy. I won't train day in, day out. I won't show up every day.

"But I'm always willing to go out there and try to put on a show. I know people that bought a ticket today probably had a great day and I enjoyed myself a lot out there.

"Maybe there are a couple of things I could do better. Yeah, I like the way I do things. At the end of the day, it's tennis, man. Is it really that important? I mean, for everyone here, obviously, yeah. For me it's not so important." For 18-times Grand Slam champion Nadal, such a concept is utterly inconceivable. The two men have history, and there was a crackling tension in the air that brought out the best of both in Thursday's second round clash.

Nadal found the focus when it really mattered and, though he recognised Kyrgios's talent, he also highlighted the missing ingredient that American Gallwey identified four decades ago.

"If, if, if - doesn't exist," he said when asked if he thought the 24-year-old could win a Grand Slam. "As I've said plenty of times, he's a very talented player. But there is a lot of important things that you need to do to become a champion.

"He has a lot of good ingredients but, of course, there remains an important one sometimes, and that is the love, the passion for this game. Without really loving this game that much, it is difficult to achieve important things.

"With his talent and with his serve, he can win a Grand Slam, of course. He has the talent to do it. It's true that things can be completely different for him if he wants to play all the matches the same way that he tried today."

Kyrgios praised 33-year-old Nadal for the way he fought for every point in a 6-3, 3-6 ,7-6(5), 7-6(3) win, while the Spaniard highlighted the absence of just that intensity in Kyrgios's first-round win over fellow Australian Jordan Thompson.

© Copyright 2021 Reuters Limited. All rights reserved. Republication or redistribution of Reuters content, including by framing or similar means, is expressly prohibited without the prior written consent of Reuters. Reuters shall not be liable for any errors or delays in the content, or for any actions taken in reliance thereon.
Related News: Nick Kyrgios, Rafael Nadal, IMAGE, Jordan Thompson, Timothy Gallwey
SHARE THIS STORYCOMMENT
Print this article 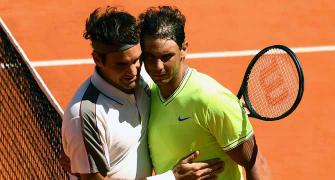 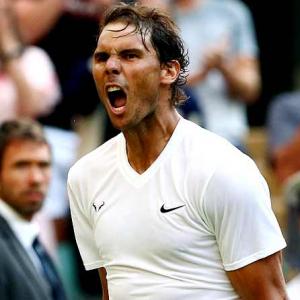