It was the best match of Wimbledon's opening week as, amongst the expected histrionics, both men hit the heights with some relentlessly powerful and accurate serving in particular. 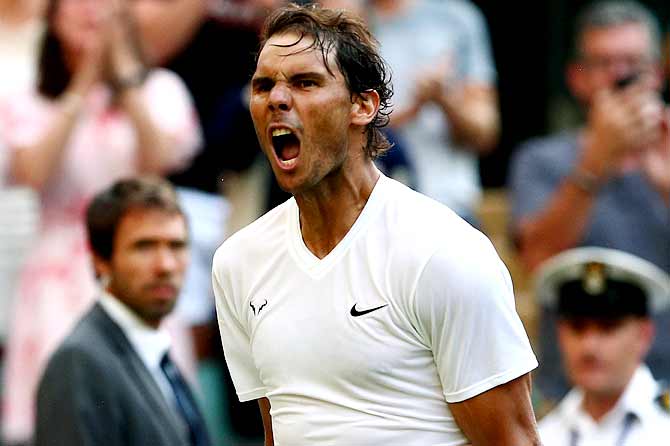 IMAGE: Rafael Nadal showed his mettle in the clutch moments to come through for a third round meeting with Frenchman Jo-Wilfried Tsonga. Photograph: Hannah McKay/Reuters

Twice Wimbledon champion Rafael Nadal emerged victorious from a memorable four-set duel with Australian wild man Nick Kyrgios that delivered everything it had promised in front of an enraptured Centre Court crowd on Thursday.

The fiery Kyrgios threw everything he had at the third seed - including an extraordinary 143mph second-serve ace - and undoubtedly had him rattled before the Spaniard eventually prevailed 6-3, 3-6, 7-6(5), 7-6(3) in the second round clash.

It was the best match of Wimbledon's opening week as, amongst the expected histrionics, both men hit the heights with some relentlessly powerful and accurate serving in particular.

Nadal started strongly, got pegged back as Kyrgios fuelled himself with fury in a second set full of incident, then came through a high-octane tiebreak to take the third.

The 43rd-ranked Kyrgios then gave a reminder that amid all the antics there is a player of huge quality, one of the few with the weapons to challenge the game's dominant trio, with 33-year-old Nadal the one he seems most able to unsettle.

Nadal, however, is not one to take a backward step and again showed his mettle in the clutch moments to come through for a third round meeting with Frenchman Jo-Wilfried Tsonga.

"When he wants to compete, he's one of the toughest opponents you can face," Nadal said of Kyrgios.

"It's amazing how good he is able to play, so if he is able to forget all these things, he's potentially a Grand Slam winner. He has a lot of good ingredients to become a champion but, of course, there remains an important one sometimes, and that is the love, the passion for this game." 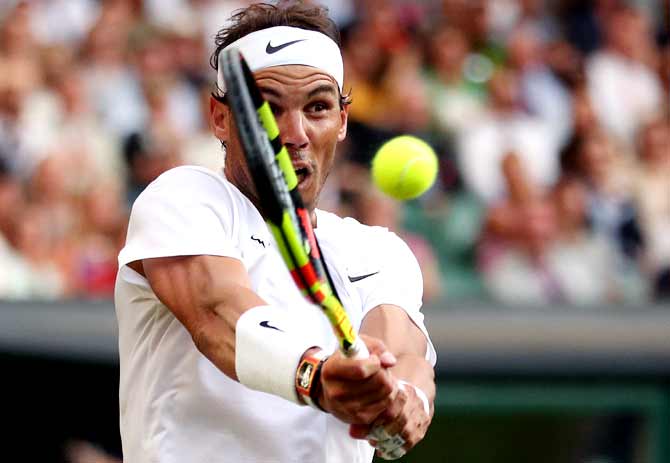 Nadal was in complete control in the early stages and Kyrgios seemingly needed an injection of emotion to fire him up. The Spaniard duly provided it with his slow-motion movement between points and a surprise toilet break after the first set.

“Why am I waiting to serve?” Kyrgios asked the umpire.

The Australian made his mark when he blasted a 143mph (230kph) second serve-ace - the fastest serve of any sort during the tournament so far and the second-fastest second serve in ATP history. He followed up with another ace – via a gentle under-arm lob – though still lost the first set comfortably.

Kyrgios was far more impressive in taking the second, breaking early with a fierce forehand down the line that saw the crowd erupt as they realised they were in for a real match.

If it made the Australian happy, however, it was hard to tell as he kept up a running dialogue with the umpire, which earned him a warning. “You're no-one. You think you're important. You have no idea what's going on. You're a disgrace,” he said.

When Kyrgios did concentrate on his tennis, he was full of invention and variety - introducing an Ali shuffle after his big winners and upsetting a rival he already had history with by launching a return straight at him at the net, earning a glare in return. 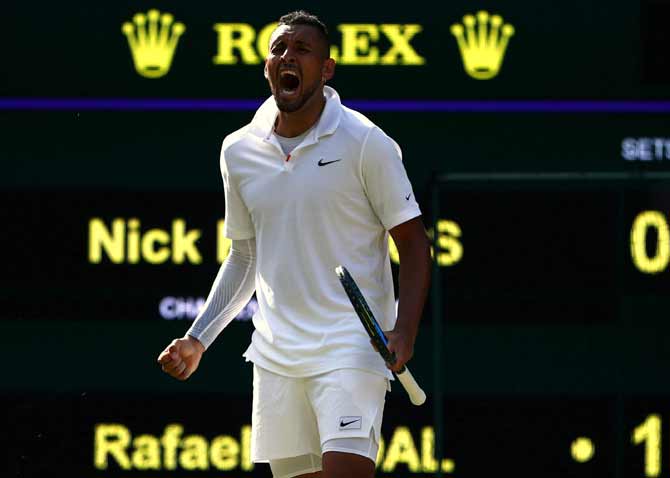 IMAGE: Nick Kyrgios made his mark when he blasted a 143mph (230kph) second serve-ace - the fastest serve of any sort during the tournament so far and the second-fastest second serve in ATP history. Photograph: Hannah McKay/Reuters

Nadal, with 18 Grand Slam titles to his name, was somehow playing second fiddle on Wimbledon’s Centre Court to a mid-ranked player who tells anyone who will listen that he barely cares whether he wins or loses.

Five years ago he stunned the Spaniard here in the win that announced him to the world and the 24-year-old came into Thursday’s game with a 3-3 career head-to-head record.

Adding spice to the showdown was the Australian's recent interview where he described Nadal as "super salty" and gracious only in victory.

Nadal did his best to rise above it all, though he also exploded with emotion after a huge service hold during a stupendous third-set showdown which the Spaniard eventually took on a tiebreak.

The fourth set was less theatrical, yet just as gladiatorial, as both men found extra power and consistency in their serving to go to 6-6.

The decisive tiebreak was perhaps a microcosm of the two men's careers. Kyrgios suffered a first mini-break when netting a point-blank overhead that would have shamed a park player, then mis-hit two returns as Nadal found the lines with every shot.

"He plays every point, he doesn't take one point off, I feel like we're the polar opposites," Kyrgios said of Nadal.

"On big points he played well, he was on fire with his forehand. I played a couple of loose points here or there. That's all it takes against a player like that. He was just too good today."

© Copyright 2020 Reuters Limited. All rights reserved. Republication or redistribution of Reuters content, including by framing or similar means, is expressly prohibited without the prior written consent of Reuters. Reuters shall not be liable for any errors or delays in the content, or for any actions taken in reliance thereon.
Related News: Nick Kyrgios, Rafael Nadal, ATP, Centre Court, IMAGE
SHARE THIS STORYCOMMENT
Print this article 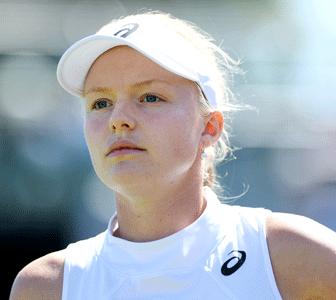 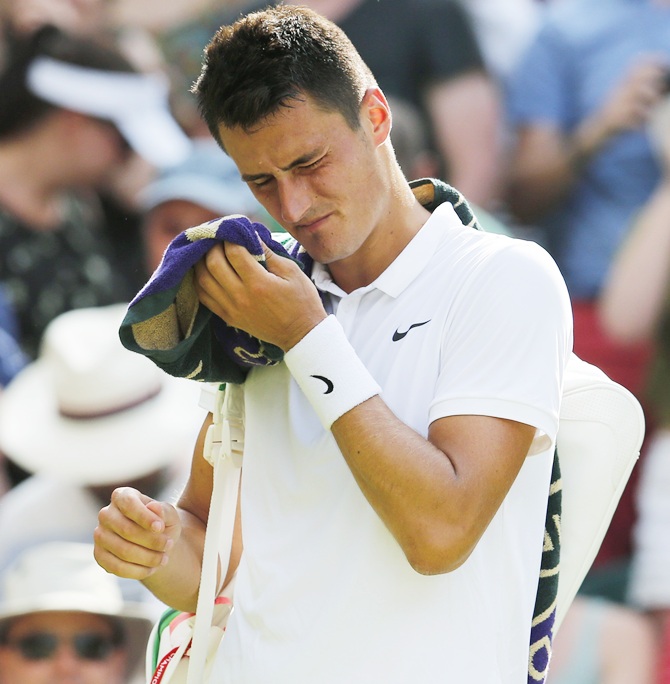 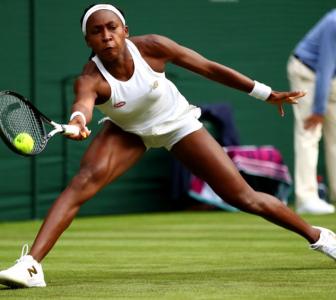 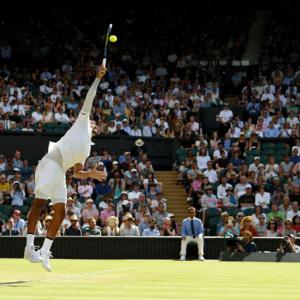 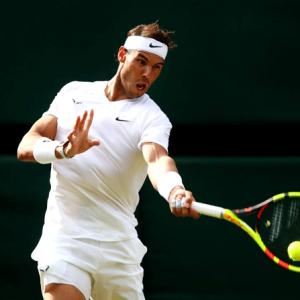