Iran to complain to FIFA over women's ban

Iran will complain to world soccer's governing body FIFA after its women's team were banned from a qualifying game for next year's Olympics due to their Islamic dress, the ISNA news agency reported on Sunday.

The Iranian team were banned from a match against Jordan shortly before the game was due to start in Amman on Friday, Iran's state-run Press TV reported.

Jordan were awarded a 3-0 win in the second-round qualifying match.

"We will file a complaint to FIFA against the official in charge of the matches," Ali Kafashian, head of Iran's football federation, was quoted as saying by the student news agency ISNA.

The row over what Iran's women players are allowed to wear has been brewing for more than a year. FIFA banned the team last April due to their plan to wear headscarves, in accordance with the Islamic dress code which requires all women in Iran to cover their hair in public.

The Iranian federation made changes to the kit and believed it had reached an acceptable compromise.

A photograph on Press TV's website (www.presstv.ir) showed players at Friday's match in white tracksuits and head coverings that concealed their hair and ears, kneeling around the Iranian flag on the pitch.

"Although it has been said in FIFA's regulations that no country can play with Islamic dress, we had necessary negotiations with FIFA officials," Kafashian said.

"Unfortunately, I do not know why the Bahraini official in charge of the matches refused to let our team play."

News reports in Iran stressed the Bahraini nationality of the official. Iran has been a vocal critic of the Sunni Muslim Bahraini monarchy's violent crackdown on democracy protestors from the Shi'ite majority in recent months.

© Copyright 2023 Reuters Limited. All rights reserved. Republication or redistribution of Reuters content, including by framing or similar means, is expressly prohibited without the prior written consent of Reuters. Reuters shall not be liable for any errors or delays in the content, or for any actions taken in reliance thereon.
Related News: FIFA, ISNA, Iran, Ali Kafashian, Muslim Bahraini
COMMENT
Print this article 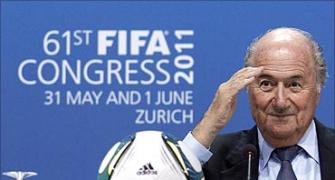 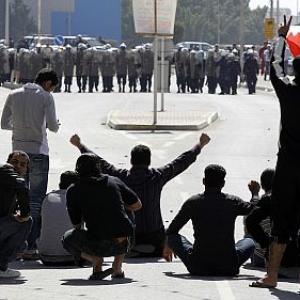 How Shia-Sunni strife can worsen crisis in Bahrain