Postponing the South Asian Games from October 2012 to 2013, and scrapping all the newly-formed committees, were some of the major decisions taken by the Indian Olympic Association's General Body after its meeting in Delhi on Friday.

The South Asian Games, scheduled to be held in India in October, were postponed to February 2013, largely because of logistical reasons.

The General Body meeting, which turned out to be quite stormy, also decided to withhold the implementation of a proposed new constitution which calls for a revamp of the voting system.

"South Asian Games had to postponed because it came two months after the Olympic Games and the athletes were not comfortable with that prospect," a top IOA official said.

"The Delhi government had also informed us that accommodation would be a problem during October-November next year. Taking all that into account the General Body decided to postpone the Games to 2013," he said.

The General Body has also made it clear that the IOA's acting president V K Malhotra should work with the Delhi government and Sports Ministry with regard to the conduct of the Games.

"It was felt that the IOA's role should only be restricted to conducting the Games," the source said.

In what is seen as a setback to outgoing Secretary General Randhir Singh, the new constitution, which is said to be his brainchild, did not get the General Body's approval.

"It was unanimously decided that the proposed constitution should be looked into again. It was decided to form a committee to reassess certain clauses in the constitution, particularly those related to the voting rights of the members," the source informed.

"State Olympic Committees are angry that voting rights are reduced and they have been left with just one vote in contrast to the two they have till now," the source added.

It is learnt that Randhir argued in the meeting that it is in keeping with the IOC's guidelines, but many members felt that for a big country like India, such guidelines would not work.

In another significant development, all the committees that have been formed in the last eight-nine months have been rendered "null and void".

"All the committees like the athletics' commission, the disputes commission etc, have been scrapped. It was felt that the power to form such committees rested with the General Body and Malhotra could not do so on his own. The acting president has now been authorised to form new committees and get the approval," the source said.

The General Body formed a committee that will go to Kerala and asses the reasons for work being delayed for conducting the National Games in 2012.

"There is some delay in the work. A committee has been formed to go to Kerela and assess the situation. The committee will file a report to the President before a final decision is taken," he said.

On the controversial revised Sports Bill, the General Body had reservations on mainly three clauses relating to recognition of sports bodies, age and tenure of officials. 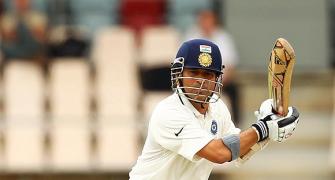 PHOTOS: Indian batting comes good in drawn Oz warm-up tie
Sonam: I don't I have the body to wear a bikini