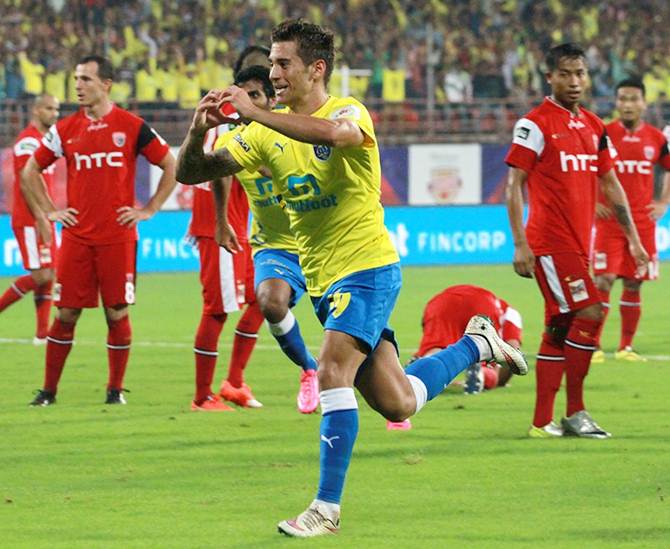 Their super star co-owner Sachin Tendulkar cheering them from the stands, Kerala Blasters FC got their campaign off to a rollicking start, recording a
convincing 3-1 win over NorthEast United FC in the Indian Super League (ISL) football in Kochi on Tuesday.

After a goal-less first half, Kerala Blasters opened the scoring in the 49th minute through Josu at the Jawaharlal Nehru Stadium.

The lead was doubled when former India striker Mohammad Rafi headed one in the 68 minute. Sanchez Watt soon consolidated the hosts' position with another goal in the 72nd minute, leaving the visitors clueless.

The NorthEast, who finished last in the inaugural edition, finally found themselves on the scoresheet when Argentine Nicolas Velez brought the margin down with a strike in the 82nd minute. The effort was a mere consolation as last season's finalist Blasters garnered full points from the game in front of their home crowd.

The Blasters went ahead when Josu, a Barcelona youth product, unleashed a powerful left-footer to send the ball to the top corner of the net after C K Vineeth's attempted overhead kick fell on his way.

Following a long throw-in into the box by Rahul Bheke, Carvalho's flick was headed in by Rafi at the far post to leave the home fans jubilant. More agony was in store for the visiting side as Sanchez Watt, who is a product of the Arsenal youth school, took the ball beautifully after being fed by Bywater and Rafi. Watt was onside and with no defender marking him, it was easy for him to shoot the ball between goalkeeper Rehenesh's feet and into the back of the net.

As all looked lost for the north-easterners, Velez reduced the margin after he cut inside following a pass by Silas. Earlier, in the first half, both teams failed to find the back of the net. When they managed to spilt the defence, their strikers were caught offside.