IMAGE: India captain Sunil Chhetri's face defines the team's fate on the day as scampers for ball possession during their 3-0 loss against Vietnam on Tuesday. Photograph: Indian Football Team/Twitter

India suffered a 0-3 thrashing at the hands of a higher-ranked Vietnam in the second and final match of the Hung Thinh Friendly Football Tournament in Ho Chi Minh City, on Tuesday.

It was a reality check for the 104th ranked Indians after three convincing wins in June in the Asian Cup qualifiers and a 1-1 draw against Singapore in this tournament on Saturday as they were literally outplayed by the 97th ranked Vietnam in the second half.

Phan Van Duc (10th), Nguyen Van Toan (49th) and Nguyen Van Quyet (70th) scored for Vietnam to no reply from the Indians whose defenders had a mediocre outing, especially in the second half.

The Indians, however, were on equal terms with their opponents in the first half only to be blown away in the second session.

Vietnam won the tournament with two wins from as many matches. They had also thrashed Singapore 4-0 in their opening match.

India and Vietnam had played many a memorable matches in the past, one among them being the 2002 LG Cup final which India triumphed 3-1 having come back from behind to win the trophy.

India and Vietnam last met in 2010 in an international friendly in Pune with the Blue Tigers running out 3-1 winners with Chhetri scoring a hat-trick.

But since then, Vietnam football has been on the ascendancy and have competed with top teams in the continent. Earlier this year, they reached the final round of the 2022 FIFA World Cup qualifiers and also made it to the last eight stage of the 2019 Asian Cup.

The home side did not take long to surge ahead with Phan Van Duc finding the target in the 10th minute. The goal, though, could have been avoided had keeper Gurpreet Singh Sandhu and central defender Sandesh Jhingan communicated well.

Both Gurpreet and Jhingan, who was in the starting eleven after sitting out the last match due to late arrival on account of visa issues, went for the ball off a corner but the Indian goalie could lay his hands on it.

Jhingan's header somehow fell in the middle of the Indian box and Van Duc's sharp left-footer bulged the net even as Gurpreet managed a faint touch.

Just a minute before the strike, Gurpreet had to dive full stretch to his right to save another shot from a Vietnam attacker.

Vietnam went on the offensive but India also gradually came to their own and they had two clear scoring chances in the first half, courtesy fine assists from Akash Mishra who was superb on the left channel.

In the 26th minute, Mishra was in the thick of an Indian counter-attack and he sent a superb pass to Ashique Kuruniyan at the edge of Vietnam box on the left. Kuruniyan's volley beat the goalie but went inches wide off Vietnam's far post.

Even closer than Kuruniyan's effort was that of skipper Sunil Chhetri just before the half time whistle was blown.

Mishra chipped one from the wide left for Chhetri, who guided his header towards the far post, but missed it by a whisker. The veteran striker reacted with disbelief with hands on his head.

Vietnam pressed hard just as they came out after resumption and they had a couple of shots at the Indian goal.

The second goal from Vietnam came four minutes after the break as Nguyen Van Toan won an aerial duel with Anwar Ali and then beat Gurpreet with a shot.

Van Quyet was gifted the ball from a headed clearance inside the Indian box and he curled it past Gurpreet to punish the visitors for yet another defensive sloppiness. 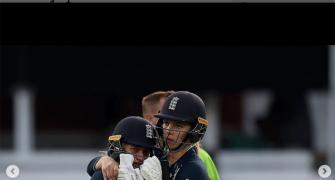 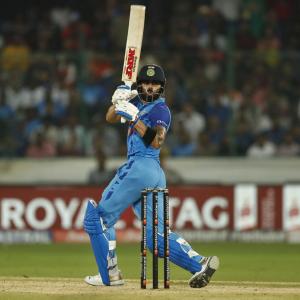