India trounced Korea 6-1 in their penultimate round-robin match to virtually seal a place in the final of the Sultan of Johor Cup Under-21 hockey tournament, at the Taman Daya Hockey stadium in Johor Bahru, Malaysia, on Thursday.

The Indians scored thrice three each half to extend their unbeaten run in the six-nation tournament.

It was India's fourth straight victory in the tournament, having defeated England 2-1, Argentina 3-2 and Pakistan 4-0 in their previous matches.

Korea's lone goal was scored by You Seung Ju in the 34th minute.

With 12 points, India lead the league standings and play hosts and second-placed Malaysia in their last round-robin match on Saturday.

It took India just seven minutes to open the scoring through drag-flicker Rohidas, who beat Korean goalkeeper Lee Se Young from a penalty-corner.

The lead was doubled two minutes later through a field goal from Satbir after he was set up by Harjeet Singh.

Talwinder made it 3-0 four minutes from half-time with another field goal.

The Koreans to pulled one back three minutes later when You Seung Ju scored from a penalty-corner.

India slowed down the pace after the lemon break and conceded a few penalty-corners but the Koreans failed to utilise the scoring chances.    After a slow start to the second half, India gradually took control of the proceedings and scored three more field goals to run away with the match.

India's chief coach Gregg Clark was full of praise for his wards after their sterling performance.

"It was a good performance and this surely gives me a welcome headache as we have several more players back in India that are fighting for a place in the final 18 to the Junior World Cup," Clark said.

"We are playing well and credit to the boys who are executing our tactics and plans well on the pitch. As a coach this is something we look towards hence the performance in the last two matches has been on the rise," he added.

Image: Indian players celebrate a goal in the 6-1 rout of Korea in the Sultan of Johor Cup 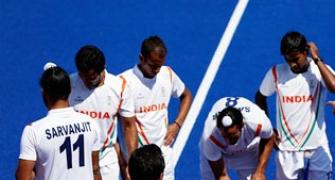 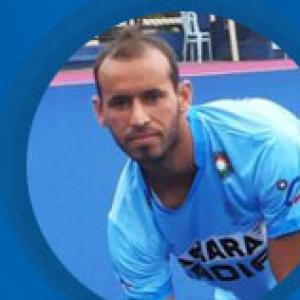 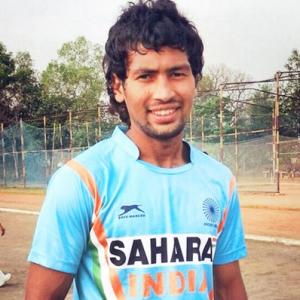