Malaysia scored thrice in the second half to score a superb come-from-behind 3-2 victory over Japan and help India enter the final of the Asian Champions Trophy hockey tournament in Ordos, China, on Friday.

Japan, needing to win the match to make it to the final, led 2-0 at half-time, but their hopes were dashed as the Malaysians scored thrice in the space of 24 minutes in the second session.

Japan's defeat handed India a berth in the summit clash against Pakistan on Sunday.

Pakistan and India had earlier in the day drawn 2-2. The Asian powerhouses emerged the top two sides in the tournament with 10 and nine points respectively after the round-robin league.

Malaysia looked out of the game after Koji Kayukawa (23rd minute penalty stroke) and Shinji Kawauchi (35th) scored for Japan. But they never gave up and Ahmad Fuzi's 46th minute strike from a goalmouth melee led a resurgence that brought two more goals in the 55th and 66th minutes.

It was Fuzi who restored parity with a field goal and Saari Faiza scored the match-winner for Malaysia with a brilliant reverse shot to dash Japanese hopes while doing India a favour.

Japan had a penalty-corner in the dying minutes, but a draw even then would have seen India go through to the final.

Malaysia and Japan will again play for the 3rd/4th position as they finished with seven points.

Korea will play China for the 5th/6th place after the two sides were locked in a 1-1 draw in Friday's last match.

Korea had seven points, but an inferior goal difference (minus one) pushed them down the table.

Unbeaten in the tournament, India dominated the barren first half but conceded two goals in two minutes to trail 0-2 by the 42nd minute. However, they fought back to draw the match under chilly and windy conditions.

India finished the group round-robin league unbeaten with nine points from two wins and three draws, but had to wait for the result of the match between Japan and Malaysia to know whether they would make it to the final or not.

Pakistan took a 2-0 lead through Muhammad Waqas (40th minute) and Muhammad Irfan (42nd), but India responded immediately with Rupinder finding the target from an indirect penalty-corner and Danish Mujtaba scoring the equaliser in the 53rd minute.

Mujtaba's equaliser, a deflection from his stick, was a tad controversial as New Zealand umpire Simon Taylor did not initially award a goal. But the Indians appealed and the South Korean umpire, after consultation with Taylor, awarded a goal.

India's coach Michael Nobbs rued that his side would have won had they converted the penalty-corners they forced.

"Penalty-corners let us down but the boys would have learnt from this high pressure match and I hope we get another match with them in the final," said Nobbs. 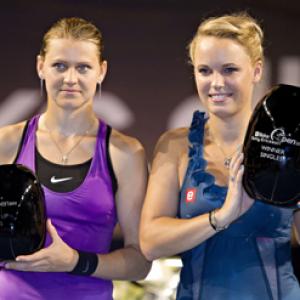