Kashyap, the 2012 Olympic quarter-finalists, survived a scare from the unheralded Indonesian Tommy Sugiarto before scoring a 21-18, 23-21 win at the BBD UP Academy.

Earlier, Sindhu, the women's world No. 23 and second seed in the tournament was hardly tested in her 21-12, 21-14 win over Thailand's Sapsiree Taerattanachai.

In the men's semifinal, Kashyap dominated almost the entire length of the match, then lost focus in the closing session but made a timely comeback in the finish.

"I'm happy to be in the final. I wasn't pushing myself today because of my back problem.," said an elated Kashyap.

He will take on the 14th seed Thai, Tanongsak Saensomboonsuk, who beat Indonesia's Alamsyah Yunus 21-14 21-17 in the other semifinal.

Meanwhile, Sindhu had yet another smooth outing in the tournament, outclassing her Thai opponent and third seed in the women's singles semifinal.

Sindhu looked pleased with her performance and said, "It's amazing to be in the finals. Last time I lost to the same girl because I wasn't well. Now, I'm all set for the final." 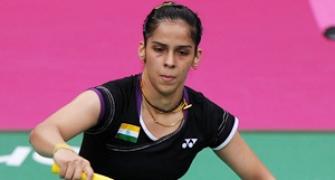