It was an all win-day at the Australian Open on Friday, with Leander Paes, Sania Mirza, Mahesh Bhupathi and Rohan Bopanna winning their respective doubles matches, in Melbourne.

Paes and his new partner Radek Stepanek advanced to the pre-quarter-finals of the men's doubles after a hard-fought 6-2, 7-6(5) victory over the 14th seed Italian pair of Simone Bolelli and Fabio Fognini in the second round.

They are now up against the third seeded team of Michael Llodra of France and Serbian Nenad Zimonjic. 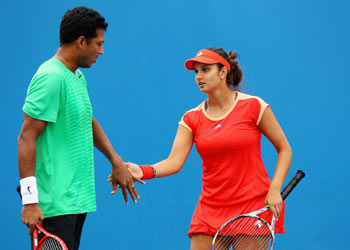 In the mixed doubles, 2009 champions and sixth seeds Sania Mirza and Mahesh Bhupathi downed South Africa's Natalie Grandin and Jean-Julien Rojer of the Netherlands Antilles 6-4, 6-2 in their opening round.

In the second round, they await the winner of the match between Iveta Benesova/Jurgen Melzer and Nuria Llagostera Vives/Oliver March.

The most impressive win of the day for the Indian camp came from Rohan Bopanna and his American partner Lisa Raymond. The fourth seeded pair thrashed Austrian Alexander Peya and Galina Voskoboeva of Kazakhstan 6-1, 6-0 in the mixed doubles.

They next take on the winner of the all-Australian clash between Olivia Rogowska/Marinko Matosevic and Casey Dellacqua/ Matthew Ebden. 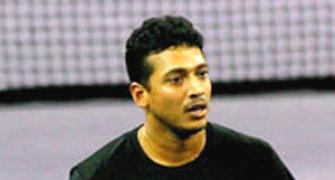 Sania-Vesnina romp into second round at Aus Open