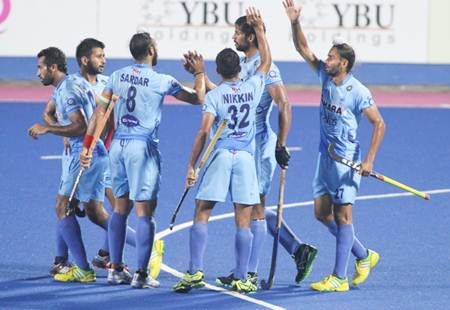 With all hopes of making it to the final erased, a misfiring India had to toil to get the better of lowly Canada 5-3 and register their first victory in the 24th Sultan Azlan Shah Cup hockey tournament, in Ipoh, Malaysia, on Thursday.

For Canada, 15th in the world as compared to India's ninth ranking, Oliver Scholfield (43rd), Jagdish Gill (49th) and David Jameson (52nd) were the scorers.

Even though India had a better share of possession and ball control, they were far from impressive. For the fourth straight match they were guilty of missing numerous chances and their fragile backline conceded soft goals.

With the presence of two big drag-flick exponents in Raghunath and Rupinder, scoring from penalty-corners is considered India's strong point, but they cut a sorry figure in this department as well, making the best of just two of the eight that came their way on Thursday.

Besides giving new chief coach Paul van Ass his first victory since taking charge of the team, the only solace from the game against Canada was the performance of the forwardline, which scored three fine field goals.

It was, however, Canada who had the first shy at goal from the game's first penalty-corner in the fifth minute, but India’s goalkeeper, PR Sreejesh, made a double save to deny Canada.

Canada had another penalty-corner in the ninth minute and Sreejesh again did well to keep John Smythe's flick away.

Soon India mounted continuous raids into the Canada citadel and earned three quick penalty-corners, the last of which was converted by Rupinder in the 13th minute.

India secured another penalty-corner in the second quarter but this time Rupinder was slow to get off the block and from the resultant rebound shot over.

The scoreline would have been bigger had the Indians not wasted the penalty-corners that came their way. In the third quarter, they earned three more but wasted all.

Canada stunned India when Scholfield scored from a counter attack in the 43rd minute with a powerful reverse hit to which Sreejesh had no answer.

It was a goal-fest for the spectators in the fourth and final quarters as Ramandeep, who was off-colour till Thursday’s match, scored twice in the span of two minutes to make the scoreline 4-1.

Ramandeep first pushed home after he was set up by Nikkin Thimmaiah in the 46th minute and then he neatly deflected in a Gurbaj Singh's cross from the right in the next.

Canada pulled one back in the 49th minute through a penalty-corner conversion by Gill before Satbir extended India's lead, guiding home a pass from Manpreet Singh.

India conceded yet another soft goal when Jameson tapped in from close range after an array of defenders failed to stop Gabriel Ho-Garcia's cross.

India plays World champions Australia next on Saturday in what is expected to be their toughest match of the tournament.

They are out of Sunday's final race, having garnered just four points from four games following a victory and draw.