North-East football giant Shillong Lajong came from behind to beat Kingfisher East Bengal 2-1 in a thrilling encounter, witnessed by more than 20,000 strong fans at the J N Stadium in Shillong on Saturday.

EB started confidently and opened the account earlier than they had probably planned.

The breakthrough happened in the fourth minute when Tolga Ozbey cut past Lajong's defenders, worked his way ahead and scored past the goalkeeper for EB's solitary goal of the match.

They opened and closed the scorebooks in the 12th and 16 minutes respectively.

The rest of the match was a saga of missed chances.

At the post match conference, Lajong's coach P Reddy expressed his heart out for the performance of his boys especially at the midfield and the forwards.

Admitting that the first five minutes were shaky at the back, Reddy however, said, "The movements of Sushil Kumar and Mayora provided gaps for other players like Eugene to utilize the gaps at the opponent's box".

Reddy said Lajong targets to achieve 40 points tally at the end of the season. Lajong gathered 27 points so far and they have six matches left at the end of 20th round of the prestigious I-League.

EB on the other hand is trailing behind Mohun Bagan in the table by two points. EB has six games left in its kitty and if Dempo manage a win, EB will be trailing by eight points behind in the table.

Mohun Bagan rallied from a goal down with two late strikes by Odafa Okolie to clinch a dramatic 2-1 victory over Mumbai FC and climb to the second spot of the I-League table at the Yuba Bharati Krirangan in Kolkata on Saturday.

Gbemene Friday gave Mumbai FC a 24th minute lead and the visitors looked to pull off a stunning upset.

But their inexperience cost them dearly as two mistakes in less than eight minutes was enough to give Mohun Bagan and their frenzied supporters the last laugh in their return-leg match.

In the 80th minute, Odafa capitalised on a goalkeeping misjudgement by Sanjiban Ghosh to earn the winner, bringing joy and relief to the supporters.

With this win Mohun Bagan (37 points) leaped to the second spot, three points behind leaders Dempo.

A last minute stoppage time strike by Roberto Silva saved Churchill Brothers the blushes as they salvage a 1-1 draw against HAL in the 20th round of the I-League at Nehru Stadium, Margao on Saturday.

HAL surprised the opponents as they capitalised the lapse by defender Gouramangi Moirangthem, who failed to clear the ball inside the box for Hamza tp snatch it and fired a stiff grounder that found the back of the net in the eighth minute.

Stunned by the early goal, Churchill Brothers regrouped and launched a series of attacks, even as the visitors made a desperate attempt to keep their citadel clean in the first half.

Churchill had a couple of clear chances to equalise but Binesh Balan and Roberto failed to score.

Desperate to find the equaliser, Churchill pressed more men upfront, as he brought in Mohammed Rafi in place of Steven Dias, but failed to find the elusive goal even as Raju Yumnam missed an open chance in front of the goal as he shot out.

Roberto Silva finally found the equaliser in the dying minutes of the stoppage time, when he found himself free on top of the box, essayed a firm shot off a pass from Rafi, which sailed into the far corner of the net to help his team gain a vital point.

With this draw, Churchill Brothers and East Bengal have collected 34 points from 20 matches.

But on the head on count, Churchill moved to third place displacing East Bengal to fourth place.

HAL remained at the bottom with seven points from 20 matches. 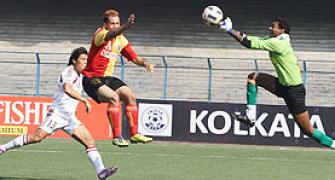 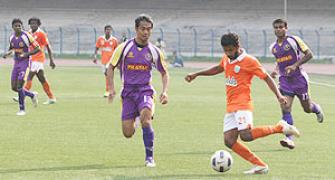 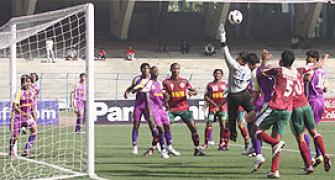 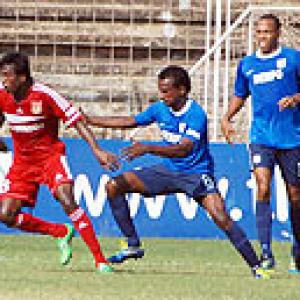 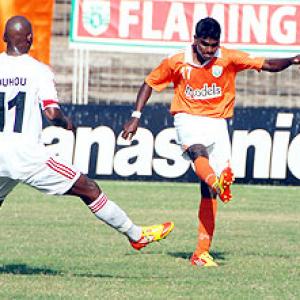 I-League: Sporting Clube edge out Pune FC in a thriller