Ranti Martins scored all of his team's goals as Dempo Sports Club floored Sporting Clube de Goa 4-1 and ensured they have more than just a hand on the I-League trophy in the 25th round I-League encounter at the Nehru Stadium in Fatorda, Goa on Sunday.

The Nigerian striker was in top form as he scored all of the four goals after the teams were locked 1-1 at the end of an entertaining first session. 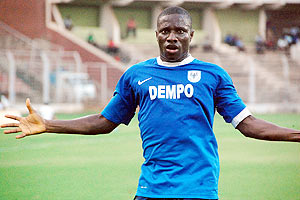 Dempo started attacking from the first whistle and made their intentions clear.

Ranti soon broke the deadlock in the 23rd minute when his shot from top of the box sailed into the top corner of the nets.

The second session, the Nigerian striker put Dempo ahead for the second time in the 51st minute and a minute later the match was beyond Sporting Clube's reach as Ranti scored his and the team's third goal.

Ranti made it even better in the 73rd minute when another cross from the right by Anthony Pereira was converted with ease by the Nigerian striker.

Ranti Martins was adjudged man-of-the-match for his splendid performance.

Dempo are now nine points clear at the top and are overwhelming favourites to win the I-League for a record fifth time.

Both the team started the match in an aggressive mood and it was the home side who scored in the 7th minute of the game when Sushil Kumar Singh converted the Renedy Singh's flag kick into the net. 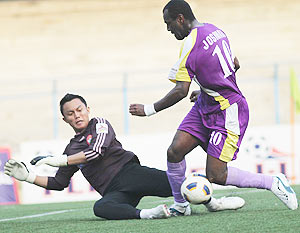 In the 15th minute Eugenson Lyngdoh gave home side a lead when he headed home the Renedy's cross ball but home side party short lived as in the 28th minutes of the game Denson Devadas headed home the Jayanta Sen's flag kick.

In the 32nd minute Prayag took the lead for the first time with Josimar opening his account scoring the third goal for tourist side when he converted the S. Malsawm Tluanga's cross ball home and score the fourth goal for the winners in the similar manner in the 55th minute.

Matthew Osvaldo Mayora, who replaced Laramluaha in the second half, did created few good moves and was succeeded scoring in the 77th minute when he converted skipper John D. Menyongar's ball home, however, thirty second later Josimar scored his hat-trick and fifth goal for Kolkata side.

Josimar was later declared the man-of-the-match.

With the win Prayag United have moved to 42 points against their kitty from 25 matches while Shillong Lajong's remained at 27 points from 25 matches.

Pune FC was handed their second defeat at home going down to Churchill Brothers 2-0 and with it slipped from the second position they held in the I-League.

A goal each by Lalrindika Ralte (27th minute) and striker Henri Antchouet (48th) sealed Pune FC's fate in a Round 25th encounter at the Balewadi Sports Complex on Sunday.

The loss meant Pune FC remains on 43 points, but the effect of the defeat meant dropping two places to fourth position in the league table. The Goans, in fact, moved up into second position.

The loss meant that Churchill Brothers avenged their 0-2 defeat in Goa, likewise this was the second loss in Pune to the Goans in three matches played. 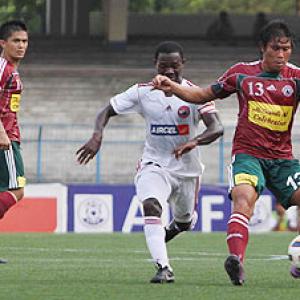