Churchill Brothers paid dearly for a missed penalty in the first half as Mumbai FC struck twice in the second half to score their first win in the third round of the I-League in Mapusa on Saturday.

After a barren first half, Mumbai, who did well to defend their citadel in the second half, scored through Essien Orok (46th) and Climax Lawerence (87th). Churchill Brothers made a couple of changes from their last match with keeper Lalit Tapa playing his first match in place of injured Arindam Bhattacharya and Anthony Periera, who has been loaned from Mohun Bagan after he refused to play them because of pay cut.

Afghanistan striker Sandjar Ahmadi made his debut for Mumbai FC.

However, they earned a penalty five minutes before the interval when Nicholas Rodrigues brought down Bineesh Balan inside the box and referee M B Santosh awarded a penalty.

Henri Antchouet, who took the kick, directed a feeble shot at the goal which rival keeper Kunal Sawant dived to his left and managed to prevent the ball going into the net.

Mumbai FC, who also came with few counter moves with Nicholas Rodrigues attempt from a free-kick, was punched over by keeper Lalit Tapa.

Mumbai FC, who looked determined to score, got the break through soon after resumption with Amiri setting up Essien Orok on the left, who was left unmark. He controlled the ball and on entering the box curled the ball that hit the post and found the back of the net.

After conceding the goal, Churchill had no option but to bring in half fit Hugo Machado and Al Kaddour as they pressed hard to find the equaliser but the rival defence led by Anwar Ali did well to keep them away.

Mumbai FC were back to the wall with Churchill Brothers camping into the box in search of the equaliser but the Mumbai side survived close chances as keeper Kunal Sawant did well to punch over a free kick taken by Hugo Machado.

The Mumbai side made a counter with Nicholas Rodrigues sending a low cross from the left into the box for Climax Lawerence, who volleyed the ball into the net to make the issue safe and give Mumbai FC full points.

Churchill Brothers did everything except scoring and were unlucky in the dying minutes as Henri Antchouet's effort was saved by defender Valerino Rebello on the goal line.

Amiri of Mumbai FC, who played outstanding game, setting Orok for the first goal, was declared the man of the match.

Sporting clube de Goa registered their first win of the season even as Shillong Lajong FC suffered their first loss at home during their third round I-League encounter played at the JN Stadium in Shillong on Saturday.

The match ended 1-0 in favour of Sporting.

Lajong were defensive but whenever their opponents were caught napping, they regrouped to create chances.

A corner kick by Cajetan Fernandes saw tall Kalu Ogba heading home the winning goal for the visitor in the 37th minute of the match, dashing the hopes of the 15,000 strong Shillong Lajong fans.

Lajong tactically delayed the match and referee Pranjal Banerjee penalised Rowlin Borges and others including the goalkeeper were warned.

Lajong's Trinidad and Tobago striker Ornell Glen was not up to the mark for the second consecutive match and this was evident from the several chances he missed.

Glen missed Robin Gurung's cross ball in the box in the 32nd minute during which he fumbled and let the ball roll easily into the keeper's hand.

Lajong's chance of equalising came in the dying minutes of the first half when Boithang's free kick hit the cross bar.

The home side returned stronger in the second half and a few combinations between Glen and Boithang Hoakip had Sporting worried even as Milan Singh backed the duo well.

The match was delayed in the second half when the visibility was well below 60 per cent. Match Commissioner Ravi Shankar postponed the match by over 30 minutes during which the floodlights were readied.

Returning from the second break, Lajong were up and attacking but their strikers failed to convert any of the clear chances they had. 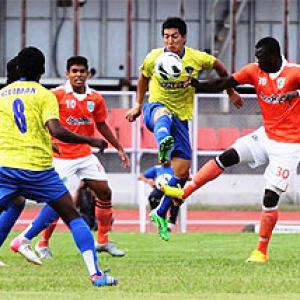