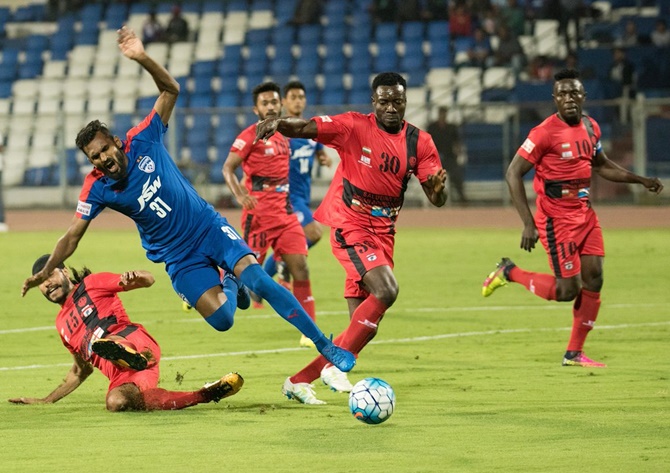 Bengaluru FC dropped their first points at home this season after a fortuitous goal allowed Minerva Punjab FC claim a point with a 1-1 draw at the Kanteerava Stadium, in Bengaluru, on Saturday.

The point leaves the Blues on fifth position with 11 points from seven games. Sunil Chhetri's fourth goal in as many games seemed like doing the job for Bengaluru, before a harmless looking cross from Kamalpreet Singh looped into the BFC goal after a heavy deflection off Sandesh Jhingan.

With the regular centre-back pairing of John Johnson and Juan Gonzalez serving a suspension, Roca started the game with Salam Ranjan Singh and Jhingan who made a return from injury.

Chhetri got his goal and Bengaluru, a much-deserved lead in the 53rd minute. Udanta Singh, after losing his marker with the kind of skill he brings to the table, sent in a cross that was headed away by the Minerva defence only to fall at the feet of Chhetri to make it 1-0.

The Bengaluru defence, that had kept things clean and flawless at the back for 78 minutes, caved in and rather cruelly. A harmless looking cross from Kamalpreet Singh seemed to have caught Jhingan’s foot and looped over a frozen and wrong-footed Amrinder Singh to make it 1-1.

Bengaluru, chasing the win, came agonisingly close to finding an equaliser on five occasions but it wasn't to be as shots from Udanta, Mandar Rao Dessai and Chhetri would only sail high or be blocked away.

Both teams showed intent to win all three points in what was a crucial game as the action unfolded.

Both teams lost possession quite easily in midfield and seemed to be an equal battle until the game came alive in the 28th minute. Chennai City goalkeeper Shahinlal made a mess of a corner and failed to hold on to it, diverting it to Debabrata Roy who touched the ball with his hand while trying to control it.

Referee Pranjal Banerjee immediately awarded a spot kick in favour of the visitors.

Mumbai’s new signing Anderson da Silva, who had just replaced Hitesh Sharma, coolly slotted the ball home with what was his first touch of the game.

But, before the euphoria died down, Chennai equalised. Charles de Souza’s shot from the edge of the box was deflected away for a corner. Edwin took the corner and it fell to Dhanpal Ganesh in the box who was left criminally unmarked.

The tall midfielder glanced the ball into the far corner and ran off to celebrate with his new coach, leaving Kashyap shell-shocked.

Chennai winger Edwin had a good chance to give his side the lead in the 59 th minute when the effusive Charles slipped him through on goal but his shot lacked power and direction.

However, the Brazilian showed Edwin how it is done, ten minutes later.

The homies notched vital three points that saw them leapfrog the Yellow Brigade to the seventh spot with as many points.

Mumbai FC’s morale, on the other hand, would have hit rock-bottom after suffering a sixth straight loss.

A confident Shillong Lajong FC went with an unchanged playing XI but failed miserably against the visitors, who had made two changes to their side after losing their last match against Bengaluru FC.

The Dave Rogers-coached squad made the best of the first half, scoring their first goal in the 16th minute of the match, whereas Shillong Lajong wasted the opportunities that came their way even as Cameroonian striker Dipanda Dicka found a fine equaliser.

The goal came from Shillong Lajong in the 34th minute of the match.

It was 10 minutes later that Shane McFaul scored the winning goal for DSK Shivajians after the Lajong keeper failed to make a good clearance of a corner kick.

After the win, Shivajians have nine points in their kitty while Lajong have 12 and both the teams are placed at sixth and fourth positions respectively.