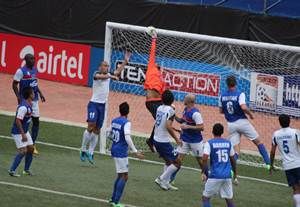 A brace by Australian striker Sean Rooney steered Bengaluru FC to a 3-1 victory over former champions Dempo SC in the Airtel I-League match at the Bangalore Football Stadium on Wednesday.

Siam Hangal accounted the home side's other goal while Clifford Miranda pulled one back for Dempo.

With this victory Bengaluru FC maintained their unbeaten record at home and went to the top of the table with 13 points from five matches.

It was the Goan team’s second defeat in the league.  They have six points from as many matches.

Bengaluru’s Manipuri striker Hangal, who waslater named man of the match, opened the scoring in the sixth minute with a superb volley from outside the box that beat a diving Dempo goalkeeper Subhashish Roy Chowdhury all ends up.

Sean Rooney doubled the lead in the 11th minute. Sunil Chhetri entered the box from the left flank and his right-rooter was punched out by Subhashish only to find Rooney, who was lurking at the edge of the box, make made no mistake in placing the ball into the far corner of the net.

Rooney scored his second goal of the match in the 61st minute to take his tournament tally to five goals when he made a run through the centre after receiving the ball from Darren Caldeira.

With only the goalkeeper to beat, he made no mistake as he slid the ball past Subhashish to make it 3-0 for the hosts.

Two minutes later, the visitors pulled one back, when Miranda’s curling left footer from a free-kick beat the entire defence.

After pulling a goal back, the visitors piled on the pressure in the Bengaluru half but some brilliant defending by John Johnson and Curtis Osano denied the visitors further success.

Image: Action in the I-League match between Bengaluru FC and Dempo 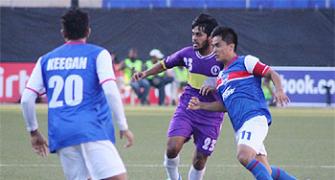 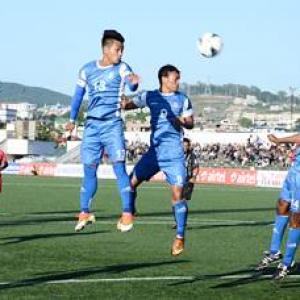