Sporting Clube de Goa suffered their third successive defeat after Air India rallied from a goal down to post a 3-1 win in the ninth round of the I League, at the Nehru Stadium, Fatorda, in Goa, on Wednesday.

Sporting were the favourites to collect full points this time. When South Sudan striker James Moga scored in the eighth minute itself, Sporting seemed to be on the right track. But Air India had other plans up their sleeves.

Sporting paid dearly for their misses as Air India soon restored parity. Relying on counter attacks, Sandesh Gadkari made amends for his earlier lapse when he headed home a well directed cross from Manandeep  to ensure the teams were locked 1-1 before trooping out for the breather. 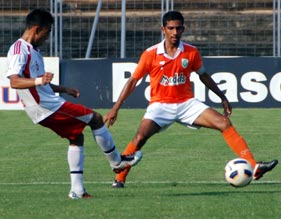 Air India surged ahead for the first time in the match in the 85th minute when substitute Ezeh Henry picked out Gadkari who only had to tap inside the goal to make it 2-1.

Henry himself added his name to the scoresheet in the last minute to take Air India's points tally to 13 from nine matches. Sporting Clube remained on 12.

Putting up a spirited show, Mohun Bagan rallied to  register a morale-boosting win over HAL Bangalore by 4-2 in the ninth  round match played in Bangalore.

HAL could not hold on to a comfortable 2-0 margin, and paid the price for instilling over-cautious approach in the second-half.

Within 25 minutes to the game, hosts took the lead through Malemngamba Meetai neat header from RC Prakash cross. Six minutes later, another one, this time from striker Hamza.

Post lemon-break, everyone thought HAL is all set to pocket full-points for the first time in this season. But star striker Odafa Okolie latched on a corner from Snehasish to score the first goal for Mohun Bagan in the 60th minute.

The corner combination of Snehasish and Odafa again worked for Bagan in the 70th minute, when Odafa scored his brace.

Mohun Bagan took lead in the 88th minute. Substitute Manish Maithani joined the party in added time, his solo left footed effort after dribbling past few HAL players from outside the box, yielded the best goal of the match.

With just a point from 9 matches, HAL is simply losing the plot!, while Mohun Bagan reached third spot with 19 points from 9 matches.

Churchill Brothers SC earned their sixth win of the season and moved within a point of the I-League leaders Dempo SC as they came back from a goal down to defeat Chirag United Kerala 2-1, at the University Stadium, Trivandrum.

Anil Kumar handed the lead for the home side in the 26th minute, but the Goan's came back into the game at the stroke of half time through Ndubisi Opara. But, the hero of the game was Mohammed Rafi who scored his first goal and the winner for his team after a nine month injury lay off.

Pailan Arrows managed to play out a 0-0 draw with Prayag United at the Salt Lake Stadium, Kolkata.

Prayag had their two foreigners upfront to start with Joshimar and Yakubu while Pailan Arrows played with their usual players comprising of promising Indian youngsters. 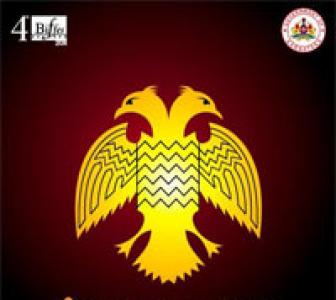 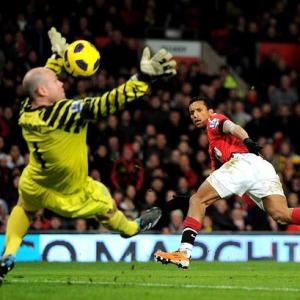