'By working flat out... we have accomplished something in five days that would normally take two years.'

If British industry succeeds in saving lives during the coronavirus pandemic it will be due in part to the pioneering role played by Formula One racing teams in the country.

Seven of the 10 Formula One teams have joined forces with leading aerospace and engineering companies to ramp up production of ventilators while Mercedes has also worked with medics and academics to produce an alternative breathing aid.

Normally obsessed with improving the performance of cars that race at more than 200 miles per hour, the teams are now stripping back life-saving devices and using computer simulation to test whether more simplified models can be mass produced.

The seven have bases in the "Motorsport Valley" area around Silverstone, a one-time World War Two airfield that switched, along with its neighbouring engineers, into racing to host the first world championship grand prix in 1950.

"F1 teams are used to operating at pace, they move quickly, within a safety remit, and have the capacity and the capability to work on both the R&D and the assembly," one person familiar with the setup said.

The device, a Continuous Positive Airway Pressure (CPAP), has been used in hospitals in Italy and China and can help patients avoid more invasive ventilation.

Having produced the first device less than 100 hours after the first meeting, the team has already secured regulatory approval and will now work with other F1 teams and the manufacturer of oxygen monitors to ramp up production.

"By working flat out... we have accomplished something in five days that would normally take two years," Andy Obeid, chief executive of the oxygen monitor firm Oxford Optronix said.

Mercedes, home to Britain's World Champion Lewis Hamilton, and other Formula One teams such as McLaren and Red Bull are also part of a consortium that has received an order for 10,000 ventilators from the British government.

In that set up, Williams and McLaren stripped an existing unit to treble check the dimensions and components and built models based on technical designs to verify they were correct, to prevent any delay to production.

Their involvement reflects the broader role Formula One teams have played in Britain for decades, using their strong record for design innovation to support British Olympic teams including the world-beating rowing and cycling squads.

It has also used race simulation to help Heathrow Airport improve movements on the ground while the Williams team has developed systems to keep supermarket refrigerators cold and newborn babies safe during emergency transportation.

Britain has long been at the forefront of Formula One through drivers Hamilton, Jackie Stewart, Jim Clark and Graham Hill. The F1 season has been suspended due to the pandemic.

"It's great to see Mercedes and other F1 teams answering the call in these challenging times," Hamilton said on Twitter. "Great job guys." 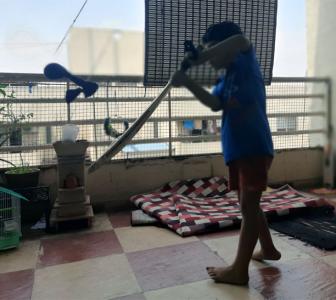