Three from young brigade assured of medals in Boxing Worlds 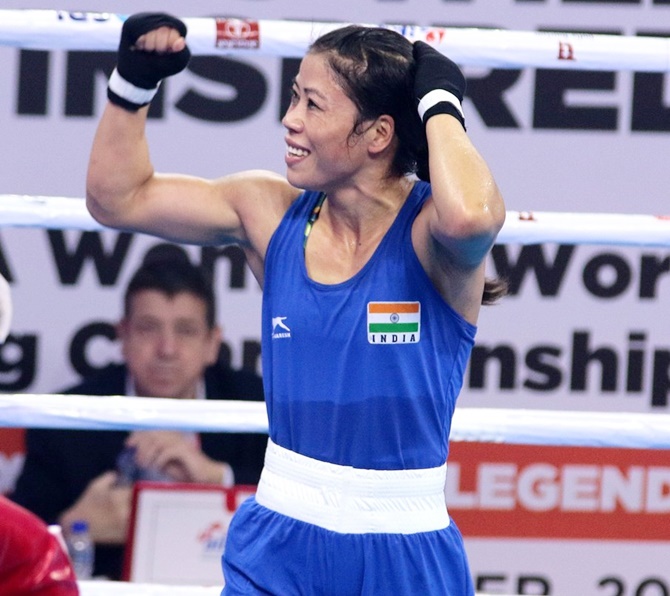 The legendary M C Mary Kom. on Tuesday, assured herself a seventh medal at the Women's World Boxing Championship to become the most successful pugilist in the event's history, while debutant Lovlina Borgohain was also guaranteed a podium finish in New Delhi.

Mary Kom, a mother-of-three, defeated China's Wu Yu 5-0 in the light flyweight (48kg) category quarterfinals to enter the semis and be assured of at least a bronze.

Lovlina Borgohain (69kg), Sonia Chahal (57kg) and Simranjit Kaur (64kg), part of India's young brigade in the boxing team, also reached the semifinals to be assured of medals in their debut World Championships.

The 21-year-old Borgohain, an Asian Champrionships bronze medallist last year, beat Scott Kaye Frances of Australia in the quarterfinals in a unanimous decision while Sonia, also 21, was a 4-1 split decision winner against Maecela Yeni Castenada of Columbia.

Eight Indians took the field on Tuesday but four of them lost their bouts.

Pinki Rani lost her 51kg quarterfinal bout against Pang Chol Mi of North Korea in a unanimous decision while Manisha Maun was beaten by top seed and last edition's silver winner Stoyka Petrova of Bulgaria in a 4-1 decision in 54kg.

Kachari Bhagyabati (81kg) lost 3-2 on split decision against Jessica Sinisterra of Columbia. The Indian was leading in the first round but the Columbian fought back to do better in the next two to clinch the bout.

Seema Poonia (+81kg) was the last Indian to take the ring but she was no match for her formidable opponent from China, Yang Xiaoli, who was the defending champion as well as 2014 gold winner.
With less number of boxers competing in the weight category, Seema was directly competing at the quarterfinals in her first bout of the tournament but she lost in a unanimous decision.

With four medals assured, India's performance is set to be the best in recent times. The country's best performance ever was the eight medals, including four gold, it won in 2006.

Mary Kom entered the event with a remarkable tally of five gold medals and a silver to her credit. She last won a world championship medal in 2010 -- a gold in the 48kg category.

"It was a tough bout. Not very tough but not very easy also. There are a lot of good Chinese boxers who keep coming. I have faced a lot of them but this opponent I have not faced earlier," the diminutive star boxer said after her bout.

"But once I got her game I thought out what to do and I had not much of a problem after that," she added.

The Olympic bronze-medallist next faces North Korea's Kim Hyang Mi in the semi-final on Thursday. The Indian had beaten her in the Asian Championships last year.

"So, I am confident of winning but not overconfident," she said.

In a bout which saw little action, Mary Kom was the better boxer with clean punches. More importantly, the local favourite rarely allowed Wu to get a clean shot at her. The five judges ruled in her favour with the elaborate scoreline reading 30-27, 29-28, 30-27, 29-28, 30-27.

Mary Kom was tied with Irish legend Katie Taylor on the number of medals won before this edition.

But with Tuesday's win, the Manipuri became the most successful boxer in the marquee tournament. Taylor now plies her trade in the professional circuit. 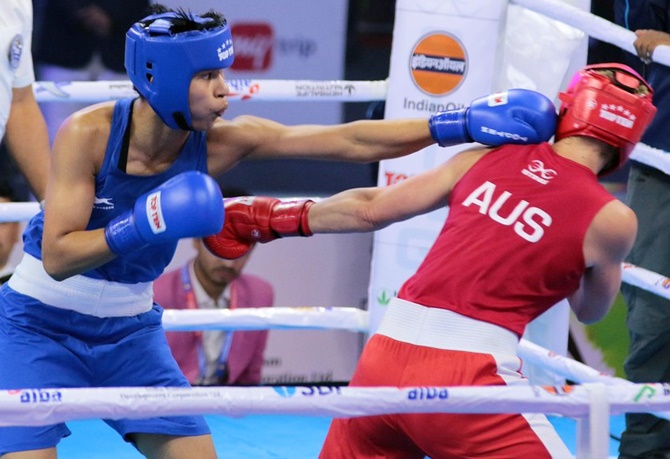 Borgohain from Assam produced a dominating performance to beat her Australian opponent, who won a silver in the 81kg catergory in the 2016 edition but competing in the 69kg in New Delhi.

Scott also won a bronze in the Gold Coast Commonwealth Games in 69kg.

"It was a tough fight but I think I handled my opponent well. I am happy to be assured of a medal in my first World Championships," Borgohain said.

"I want to win a gold and that is my target. I will not be satisfied less than a gold," she added.

Borgohain next faces Chen Nien-Chin of Taipei in the semifinals on Thurdsay.

"I had faced her once earlier and I lost. But at that time I was younger and inexperienced. But I am confident I can beat her this time," she added.

Sonia began with a solid first round but seemed to be in the backfoot in the second. With coach Rafaelle Bergamasco yelling at the ringside, she went on an attacking mode in the final round and clinched the bout.

"Rafaelle sir told me you are leading and why you are stepping back. He told me to attack in the third round which I did and won the bout. A medal is assured but I want to win the gold," she said.

Sonia next faces Son Hwa Jo of North Korea in the semifinals on Friday while Simranjit takes on Dan Hou of China in the last four stage on the same day. 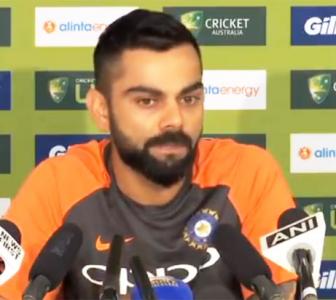 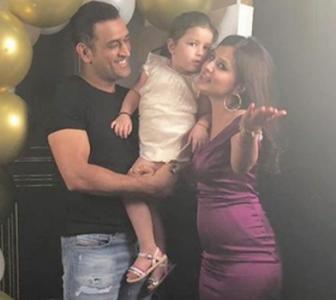 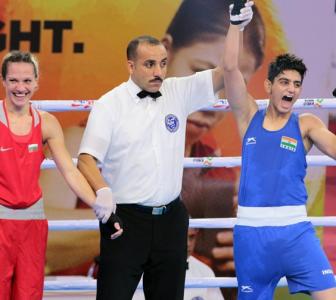 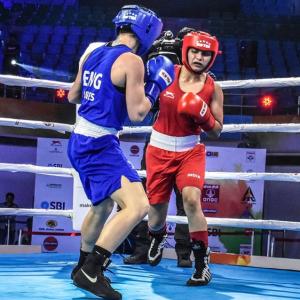