Teenage sensation Sania Mirza gave ample proof of her class to clinch the women's crown in tennis while seasoned shooter Samaresh Jung picked up his second gold as one record was re-written in the 32nd National Games in Hyderababd on Saturday.

Local girl Mirza warmed the hearts of a vociferous home crowd as she registered a facile 6-0, 6-0 victory over Maharashtra 'import' statemate Manisha Malhotra as hosts Andhra Pradesh continued to widen the gap over Punjab atop the medals table.

Manavjit Singh of  Punjab also had his moment of glory, accounting for the only new record to be established on a low-key last day of competition to collect his second gold medal in the sporting extravaganza.

In the skeet team event, the Chhattisgarh trio of Navin Jindal, Amardeep Singh Rai and Rajpal Singh won the gold as the shooting competitions came to an end with Andhra Pradesh doing the bulk of the gold shopping, collecting seven of the 16 on offer.

Andhra Pradesh, who roped in the services of star sportspersons from other states, expectedly took the top position on the medals tally with a whopping 93 gold medals till late this evening.

Punjab (48) and Services (47) were in the second and third positions respectively.

Das, who had missed out on the gold medal in the last edition, made mincemeat of Poulami Ghatak to make it a golden day for her, having earlier won the mixed doubles gold along with Saurav Chakarvarthy. They beat their statemates Anandita Chakraborthy and Shibaji Dutta.

The mixed doubles bronze went to S Sharath and T Padeepa of Tamil Nadu and Ranabir Das and Poulami Ghatak of Bengal.

The script unfolded on expected lines at the hockey arena with star-studded Punjab thrashing Maharashtra 3-1 to annex the title in men's hockey which turned out to be a rather one-sided contest.

Kanwaljit Singh, Ajit Pal Singh and Gagan Ajit Singh were the scorers for Punjab while Giriesh Pimpale scored a consolation goal for Maharashtra.

In the women's section, defending champions Haryana spanked Jharkhand 4-0 to retain the title with Jasjeet Kaur and Mamta Kharab scoring two goals each.

Manipur's Saronjoy Singh (light fly), Services' D Kannan (fly) and A L Lakara (feather) and Kerala's C A Kuttappa (light) also brought the spotlight on themselves by securing the gold in their respective weight categories.

Services expectedly ruled the roost in kayaking events, scooping up three of the five gold medals on offer today. The two other gold medals went to Andaman and Nicobar.

In Canoeing, Andhra Pradesh and Kerala shared the honours with one gold medal each. While Punjab's Daljit Singh claimed the honour in the 200 m singles event, the Kerala team comprising Baby Chacko and Manoj M P won the doubles event.

Chhattisgarh added one more gold to their kitty when their women cagers prevailed over Andhra Pradesh by a slender 80-72 margin in the women's basketball final. 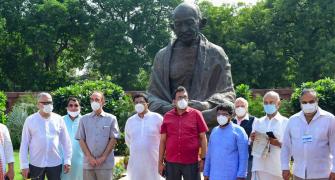