Mahesh Bhupathi and Sania Mirza eased to their second major title as a pair when they thrashed Klaudia Jan-Ignacik and Santiago Gonzalez in the final of the mixed doubles event at the French Open on Thursday.

The Indians beat the Polish-Mexican combine 7-6 (3), 6-1 in a match at Court Philippe Chartrier that lasted only 73 minutes.

The seventh seeded pair had earlier won the mixed doubles title at the 2009 Australian Open, having lost in the final of the same tournament a year earlier. 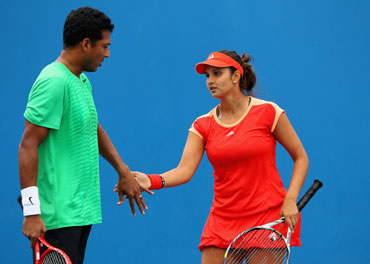 While for Mirza it was her first ever title at Roland Garros, for Bhupathi it was a fourth.

The veteran doubles specialist, who turned 38 on the day, gifted himself the perfect birthday present by adding to the title that he won in 1997 - making him the first Indian ever to win a Grand Slam - partnering Japan's Rika Hiraki.

Bhupathi also won the men's doubles title twice in the French captial, in 1999 and 2002, both in partnership with compatriot Leander Paes.

It's Bhupathi's 12th major title overall, eight of them having come in the mixed doubles format.

He is now one short of Paes' 13 major titles. For Mirza, it was a second major title.

The Indians were slow off the blocks with their rivals dominating the proceedings early on but they raised the level of their game as the match progressed and in the end scored a comfortable win.

"I don't need to give gift to my partner (now that we have won)," Sania said jokingly after the match.

It was the Indian pair, which got the first break chance in the very first game, but not only they missed that, Sania dropped her serve in the third game.

Sania struggled with both her serve and returns and Bhupathi too was not getting his shot placements right. They were down 1-3 and also squandered two break chances when Klaudia was serving in the eighth game.

But they lifted their game and spirit up, broke Santiago in the 10th game when Bhupathi smashed an overhead volley to draw parity. The set was stretched into a tie-break, where the experienced Indians prevailed.

The second set was no contest as the Indians ran through their rivals. Santiago was broken in the very first game and the Indians were unstoppable after that.

Another break of serve off Santiago put the Indians ahead 4-1 and they comfortably sealed the match. 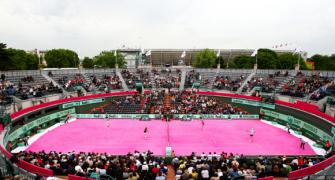 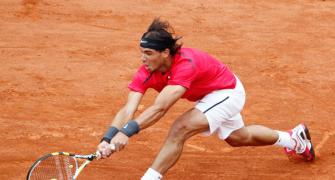