Sania Mirza and Mahesh Bhupathi entered the final of the mixed doubles at the French Open on Wednesday.

They will meet Poland's Klaudia Jans-Ignacik and Santiago Gonzalez of Mexico, who got the better of the fifth seeds, India's Leander Paes-Elena Vesnina of Russia 7-6 (7-2), 6-3 in the second semi-final.

Paes-Vesnina frittered away a 5-2 lead in the first set before going down tamely in the tie-breaker. They were erratic in the second and unable to match the power play of their opponents. After Vesnina was broken in the seventh game, the Polish - Mexican pair maintained the pressure and effected another break in the ninth game on Paes's serve to close out the set and match.

Earlier, in a keen encounter that lasted 70 minutes, Bhupathi and Sania complemented each other well, the former strong on serve and the latter sharp at the net.

In 1997, Bhupathi became the first Indian to win a Grand Slam title, when partnering Japan's Rika Hiraki he won the mixed doubles crown at the French Open.

He and Sania will be making their third appearance in a Grand Slam final. The pair won the Australian Open in 2009 and finished runners-up in Melbourne in 2008.

Bhupathi has won 11 Grand Slam titles, seven of which are mixed doubles.

Leander Paes is India's most successful tennis player with 13 Grand Slam titles, seven of which are men's doubles with various partners. 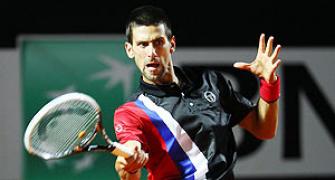