The 22-year-old has signed a four-year contract with an option of extending it for a further year after Barcelona agreed to pay 3.25 million euros ($3.62 million) to re-sign Suarez, whose buy-out clause has been set at 50 million euros.

The attacking midfielder made 48 appearances during his one season at the El Madrigal and played a key role in helping the club finished fourth in La Liga to earn a Champions League playoff spot and reach the Europa League semi-finals.

The former Manchester City player will undergo a medical on Tuesday and will be unveiled on Wednesday.

Middlesbrough have signed Dutch defensive midfielder Marten De Roon on a four-year contract from Serie A side Atalanta, the Premier League club said on their website.

Middlesbrough, who won promotion from the Championship last season, did not disclose financial details of the deal but British media reported that the Riverside club had paid around 12 million pounds ($15.89 million) for his signature.

The 25-year-old scored one goal in 36 appearances for Atalanta last season and is Boro's third signing of the close season, following the arrivals of winger Viktor Fischer and defender Bernardo Espinosa.

"Really happy with my transfer to Middlesbrough! Let's make a good season in the Premier League. Come on The Boro," De Roon said on his official Twitter account.

Nigerian striker Ahmed Musa is set to complete a move to Premier League champions Leicester City from Russian club CSKA Moscow subject to a medical, according to the player's agent.

The 23-year-old, who scored 13 league goals in 29 league appearances last season as the club won the Russian title, was linked by British media to Leicester City in January and had also attracted interest from Southampton and West Ham United.

The fee for the Nigerian international is in the region of 16 million pounds ($21.20 million) according to British media reports, which would be a club record.

"Everything has been finalised and Musa will be in England for his medical on Wednesday," the player's agent Tony Harris told BBC Sport.

"If you look at the way things are done over there, you'll see he is a player just made for English football."

The 30-year-old Jurado, who joined Watford from Spartak Moscow in July 2015, has signed a three-year contract with the La Liga club, Espanyol said on their website.

Jurado came through the ranks at Real Madrid but signed for local rivals Atletico Madrid in Aug. 2006. He spent three seasons at Atletico and one on loan at Real Mallorca, winning the 2009-10 edition of the Europa League with the former.

The midfielder's time at Atletico ended in Aug. 2010, when he moved to German side Schalke 04 on a two-year contract.

Jurado won the German Cup and Super Cup with Schalke in the 2010-11 season before moving to Moscow, where he spent three seasons before heading to England.

Sanchez Flores was sacked by Watford in May, despite guiding the club to a 13th-place finish in the Premier League and the semi-finals of the FA Cup.

The Spaniard, who was named coach of Espanyol last month, was replaced by former Inter Milan coach Walter Mazzarri by the English club. 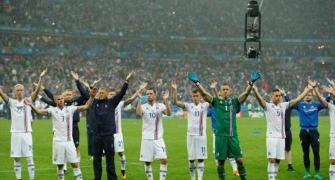 Land of geysers and glaciers can generate footballers too Euro: Wales out to inflict more semi-final woe on Portugal