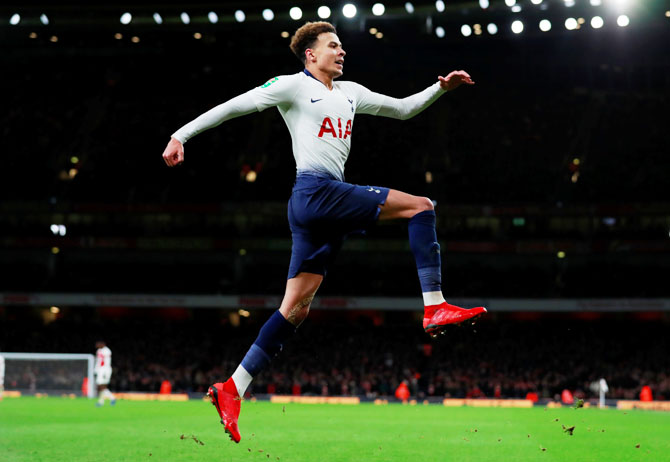 Tottenham Hotspur gained sweet revenge over north London rivals Arsenal as goals in each half by Son Heung-min and Dele Alli earned them a 2-0 win on Wednesday and a League Cup semi-final place.

Seventeen days after losing 4-2 in a pulsating Premier League clash, in-form Tottenham returned to the Emirates to claim a first away victory over Arsenal in eight years and set up a two-legged semi against Chelsea.

Son opened the scoring against the run of play with a stylish 20th-minute effort from Alli's pass and Alli doubled Tottenham's lead with a delightful dinked finish on the hour.

Shortly afterwards Alli appeared to be struck by a plastic bottle thrown from the Arsenal fans but it did not dampen Tottenham's night as they took a step towards a first trophy under Manchester United target Mauricio Pochettino.

"It's a big derby, last time we were here we didn't have a great result and this is a special night," Son said.

Arsenal had gone 22 matches unbeaten in all competitions under new manager Unai Emery until Sunday's league defeat at Southampton and a second loss in four days was a bitter pill to swallow.

The hosts played well in patches but were guilty of wasting several chances, especially before the break.

Tottenham keeper Paulo Gazzaniga, in for rested Hugo Lloris, was also inspired when he needed to be, clawing an Aaron Ramsey volley on to the post just before halftime.

The Argentine was first Spurs goalkeeper to keep a clean sheet away at Arsenal in any competition since November, 1998.

Arsenal started brightly and Henrikh Mkhitaryan glanced a header across the face of goal before Ramsey flashed a shot wide. Mkhitaryan then wasted a gilt-edged opportunity when clean through on goal, shooting too close to Gazzaniga.

Tottenham took the lead in the 24th minute when a long punt forward was flicked on to Alli, who showed great vision to set Son racing clear and the South Korean calmly curled past Cech.

Moussa Sissoko should have extended Tottenham's lead but fired wastefully over and it was Arsenal who ended the half strong with Ramsey's volley forcing heroics from Gazzaniga.

Arsenal introduced French striker Alexandre Lacazette just before the hour mark but it was Harry Kane, who came off the bench at the same time for Spurs, who made an immediate impact.

Kane chested down a high ball and his lofted pass released Alli. His first touch was sublime and his second lifted the ball over the advancing Cech to double Tottenham's lead.

"We created chances in the first half to score but our efficiency wasn’t good. We didn’t concede a lot for them, but they have quality and they scored."

Tottenham are hunting their first silverware since 2008 when they beat Chelsea in the League Cup final while they lost to the Blues in the 2015 final in Pochettino's first season in charge.

"We shall see, Chelsea are a great team but we are excited. To be in the semi-final is fantastic for us."

An 84th-minute Eden Hazard goal, which spun into the net after a heavy deflection, earned Chelsea a place in the League Cup semi-finals after a 1-0 win over Bournemouth in an entertaining tie on Wednesday.

Chelsea had buzzed round the Bournemouth goal for much of the game but it was not until substitute Hazard came on with half an hour to go that they looked creative and decisive enough to break through.

Chelsea had piled on the pressure from the start and there were good chances for Olivier Giroud, Ross Barkley, who forced a diving save from Artur Boruc and Willian, who surged forward from the halfway line after 30 minutes only for Boruc to block his rising shot.

Bournemouth looked dangerous on the break and Callum Wilson ran through on goal in the 17th minute but pulled his shot wide.

A scampering run from Jordon Ibe opened up the Chelsea defence 20 minutes later and Chelsea keeper Kepa Arrizabalaga had to fly to his left to keep out Lys Mousset's curling shot.

Ruben Loftus-Cheek looked certain to break the deadlock early in the second half after rounding two players but his shot flew inches past Boruc's post.

Chelsea brought on first Pedro then Hazard and it was a combination of the Spaniard and Belgium's Hazard that made the goal.

"The difference was the changes that we made," Chelsea's assistant boss Gianfranco Zola told reporters.

"Of course we have a lot of games and players like Eden (Hazard) we need to keep fit. Even in 20 minutes he can make a big difference."

Another player who caught Zola's eye was England midfielder Loftus-Cheek.

"I was impressed with him. He has done well as a wide player, but he showed a lot of sacrifice as a midfielder," Zola said.

"He was getting tired but was disciplined... He is a good boy and works very hard."

It was the first home game since alleged racist taunts against ManchesterCity's Raheem Sterling prompted an outcry and Chelsea banned four fans.

Chelsea Chairman Bruce Buck took a page in the programme to condemn racism and the atmosphere in the ground was lively but appeared good humoured with no added security in evidence.

Chelsea will play Tottenham Hotspur in the semi-finals.

Franck Ribery scored an 83rd-minute winner as champions Bayern Munich beat RB Leipzig 1-0 on Wednesday to cut the gap to Bundesliga leaders Borussia Dortmund to six points with one game remaining before the winter break.

The 35-year-old French winger, who had come on for the injured Serge Gnabry midway through the first half, shook off two markers and fired in from 10 metres to break the deadlock as Bayern notched their fourth consecutive league win.

Bayern, back to winning ways after a dip in form earlier in the campaign, are third in the table on 33 points, behind second-placed Borussia Moenchengladbach, who were 2-0 winners against Nuremberg on Tuesday, on goal difference.

Dortmund, who suffered their first league defeat of the season on Tuesday after losing 2-1 at promoted Fortuna Duesseldorf, are on 39. Leipzig are fourth on 28.

Bayern were far from their best and both teams hit the woodwork in the first half before the in-form Gnabry had to be taken off injured.

The hosts were no real threat for much of the second half, with Robert Lewandowski isolated up front.

Their best chance came in the 79th minute when Joshua Kimmich headed goalwards from a metre out, but his effort was blocked by keeper Peter Gulacsi, who had sprinted back from the other side of his goal.

The Hungarian, however, could do nothing when Ribery drilled in with seven minutes remaining.

The winger, who is his last season in Munich, has lost his starting spot to Gnabry this season.

Both sides ended the game with 10 men after Leipzig's Stefan Ilsanker was sent off for a reckless foul on Thiago Alcantara in stoppage time and Bayern's Renato Sanches followed suit with a second booking for pushing him in the ensuing melee.

Schalke 04, wearing shirts with names of coal pits in the area to mark the end of mining in the Ruhr valley later this month, slumped to a 2-1 home defeat by Bayer Leverkusen.

The Royal Blues, last season's runners-up, are now just a point above the relegation playoff spot.

Werder Bremen and Hoffenheim shared the points in a 1-1 draw.

© Copyright 2020 Reuters Limited. All rights reserved. Republication or redistribution of Reuters content, including by framing or similar means, is expressly prohibited without the prior written consent of Reuters. Reuters shall not be liable for any errors or delays in the content, or for any actions taken in reliance thereon.
Related News: Chelsea, Tottenham, Dele Alli, Arsenal, Bayern Munich
SHARE THIS STORYCOMMENT
Print this article 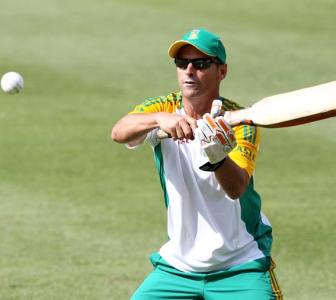 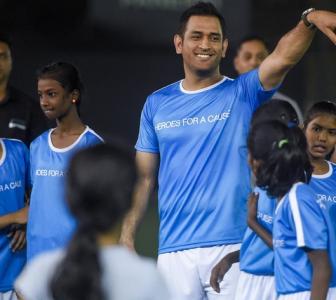 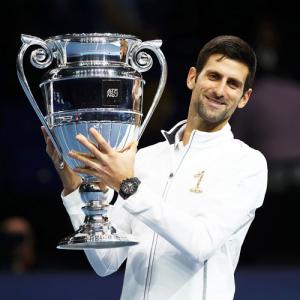 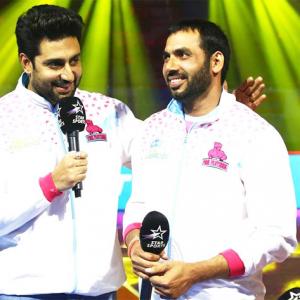