Football Briefs: Juve close in on title n Serie A 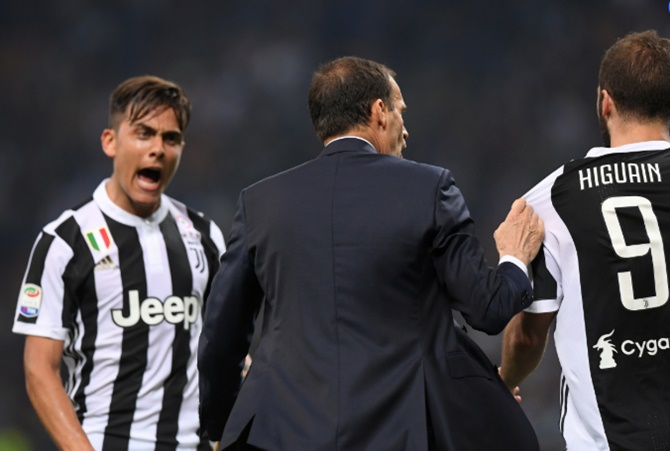 Normal service has been resumed in Serie A where Juventus are closing in on a seventh successive title after a trademark last-gasp win and a row is raging over the refereeing.

This season has produced a fascinating see-saw battle between Juventus and Napoli, allowing Serie A to proudly claim that it is the only one of Europe's big five leagues to have enjoyed a genuine title contest.

But, despite all the thrills and controversies of the last few weeks, it now seems set to end in familiar fashion -- with a Juventus win.

Four points clear and with three games each to play, Juve just need to beat Bologna and Verona at home, both in the lower half of the table, to win the title, no matter what Napoli do.

Juventus were given a taste of their own medicine when they were beaten by a 90th-minute goal at home by Napoli nine days ago, cutting their lead to one point and re-igniting the race.

When they went 2-1 down to 10-man Inter Milan at San Siro on Saturday, it looked as if the door was about to open for Napoli to win their first scudetto since 1990.

But Juve produced the sort of fightback which has demoralised their rivals so often in the past, scoring twice in the last five minutes to snatch a 3-2 win with the help of a deflected goal and a set-piece header from Gonzalo Higuain.

With the pressure back on Napoli, it all went horribly wrong for Maurizio Sarri's team as they lost 3-0 at Fiorentina on Sunday, never recovering after Kalidou Koulibaly was sent off in the eighth minute.

The selection of the officials, who are all active pitch referees, was based on their experience in using the VAR system which has been trialled in a number of competitions around the world, FIFA said in a statement.

In choosing the officials, FIFA also considered "successful participation in several preparatory seminars and FIFA competitions, where they enhanced their VAR knowledge and skills by using the system".

The European referees named were Daniele Orsato, Paolo Valeri and Massimiliano Irrati of Italy, Artur Soares Dias and Tiago Martins of Portugal, Bastian Dankert and Felix Zwayer of Germany, Pawel Gil of Poland and Danny Makkelie of the Netherlands.

Serie A, the Bundesliga and the Primeira Liga are among the leagues which have used VAR this season.

The others were Abdulrahman Al Jassim of Qatar, Wilton Sampaio of Brazil, Gery Vargas of Bolivia and Mauro Vigliano of Argentina.

FIFA said some of the previously-selected pitch referees and linesmen would also act as VARs during the tournament in Russia.

The VAR system was approved by soccer's law-making body IFAB in March after around two years of trials, although there are still concerns that it is not working as smoothly as it should.

FIFA president Gianni Infantino is a strong proponent of the system and says it has been shown to cut the number of mistakes and lift the pressure on match officials.

But critics say decisions are poorly explained to the crowd and have led to goals being disallowed unexpectedly, several minutes after being scored, or penalties being revoked with the ball on the spot and the attacking player ready to take the kick.

The VAR, who sits in a special room with video monitors and is in constant communication with the main match official, checks all decisions which could potentially decide a game.

If a "clear and obvious" mistake is spotted, the incident can be reviewed and changed. The referee, who has access to a pitchside monitor, can also initiate a review himself.

Committed Benteke wants to stay at Palace and rediscover form

Christian Benteke will discuss his future with Crystal Palace at the end of the season but the striker wants to stay at Selhurst Park and rediscover his form.

Benteke, who arrived at Palace in 2016 as the club's record signing, has endured a difficult season, scoring his only third goal in Saturday's 5-0 victory over Leicester City in the Premier League.

"I'm under contract until 2020, so I want to stay here," the 27-year-old Belgian, who scored 15 league goals for Palace last season, told British media.

"I'm going to speak to the chairman (Steve Parish) and the club about what they want to do with me.

"They saw the best of me last season, and I wanted to do even better this season, but it didn't work like that and I will go again next season."

Wilfried Zaha scored the opening goal in the weekend's clash and manager Roy Hodgson reckoned the forward was not looking to switch clubs at the end of the season. 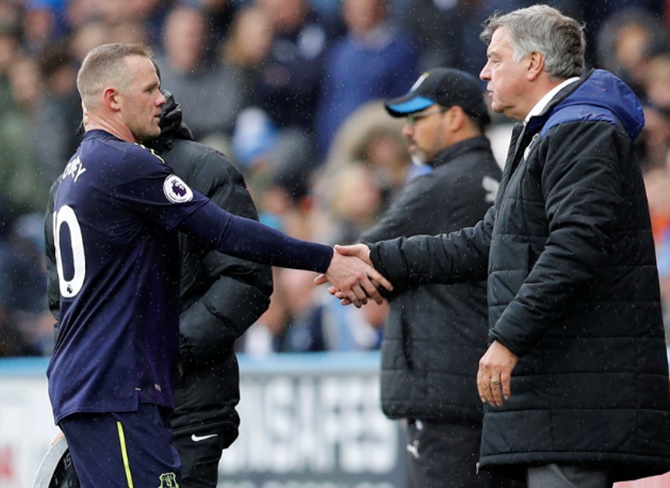 Everton striker Wayne Rooney hopes the club can restore stability at Goodison Park and has backed manager Sam Allardyce to extend his stay beyond the current campaign.

Following the dismissal of Ronald Koeman and a short spell for David Unsworth as caretaker early on in the season, Allardyce took charge of Everton in November and led them away from the relegation zone and up to eighth in the Premier League.

"Obviously it's tough having three managers in one season, that's not the normal situation you face," Rooney told British media.

"I think the club, we all want stability, and I’m sure the owners will do that."

Everton have picked up 33 points from 22 games under Allardyce but there has been growing discontent among some fans over the quality of football on display.

Rooney said Allardyce had the strength of character not to be unsettled by the complaints.

Manchester United's top scorer Romelu Lukaku limped out of Sunday's 2-1 Premier League win over Arsenal at Old Trafford and his manager Jose Mourinho is not sure if he will be fit for the FA Cup final.

Lukaku, who has netted 27 goals in all competitions this season, was replaced in the 50th minute by Marcus Rashford and United face Lukaku's old club Chelsea in the final at Wembley on May 19.

"I don't know if he is going to be out or if he's not okay," Mourinho told reporters.

"He wants to play all the time. He is never tired and, when he has small things, he doesn't care. He still wants to go.

"So, for him to say immediately, to change him, it is because he couldn't play. But there are three more weeks until the final, so let's see. I know it was on his foot but I don't know more yet," Mourinho said.

Nenad Krsticic gave Red Star, who won Europe's elite club competition in 1991, an 80th-minute lead and Aleksandar Pesic sealed the win with a 90th-minute penalty after Comoros striker El Fardou Ben was fouled in the box.

Jubilant Red Star fans invaded the pitch after the final whistle and mobbed the players, who once again nosed ahead of Partizan in the perennial battle for domestic supremacy between Serbia's big two.

"I am very proud of the players, the fans and my staff, now is the time to enjoy our accomplishment," Red Star coach Vladan Milojevic told Arenasport television.

"We've been through a lot this season and we'll try to put the icing on the cake in the final three games."

Partizan, who have won 27 league titles, lost any hope of staying in contention after a 2-1 defeat at Vojvodina Novi Sad, with the home team's Dusan Jovancic and Aleksandar Radovanovic cancelling out Marko Jankovic's goal for the visitors.

Klopp's assistant Buvac will be absent until end of season

Liverpool manager Juergen Klopp will go into Wednesday's Champions League semi-final second leg against AS Roma without his long-term assistant Zeljko Buvac who will be absent from his role until the end of the season.

The Premier League club said Buvac remained a Liverpool employee but is spending time away from the first team for personal reasons.

Bosnian Buvac played with Klopp at Germany's Mainz in the 1990s and was his assistant manager at the club before moving with him to Borussia Dortmund and on to Liverpool in 2015.

Liverpool's position is that the club consider the matter to be private and they will not be making any further comment.

Liverpool lead Roma 5-2 from the first leg at Anfield and if they succeed in defending that advantage at the Stadio Olimpico they will face Real Madrid or Bayern Munich in the final in Kiev on May 26.

Four-nation meet will help us test our strength: Jhingan

Indian football team premier defender Sandesh Jhingan is hopeful that the upcoming four-nation tournament in June to be played in Mumbai would be a good test for the side.

The AIFF will be hosting the inaugural edition of the four-nation Intercontinental Cup to be played at the Mumbai Football Arena from June 1 to 10.

"That (the Intercontinental Cup) is really good. Our main priority is to be ready for the Asian Cup and it starts in January. This tournament, along with the teams that are coming in including New Zealand, will be a very good test for us," the 24-year-old said.

"The more better teams you play, the better you get. It (the tournament) is the right opportunity to test ourselves. We never come across teams like these quite often -- New Zealand, South Africa, they are going to play a different kind of football," Jhingan said.

© Copyright 2020 Reuters Limited. All rights reserved. Republication or redistribution of Reuters content, including by framing or similar means, is expressly prohibited without the prior written consent of Reuters. Reuters shall not be liable for any errors or delays in the content, or for any actions taken in reliance thereon.
Related News: Napoli, Sam Allardyce, Romelu Lukaku, Wayne Rooney, Red Star Belgrade
SHARE THIS STORYCOMMENT
Print this article 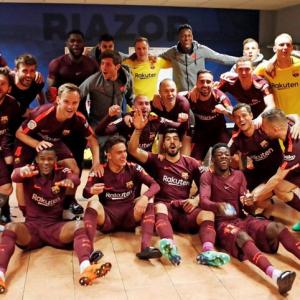 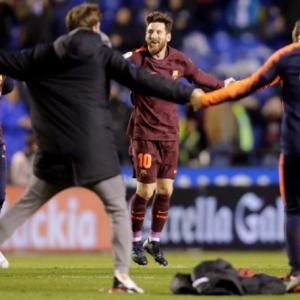